What Vaping Says About Marketing 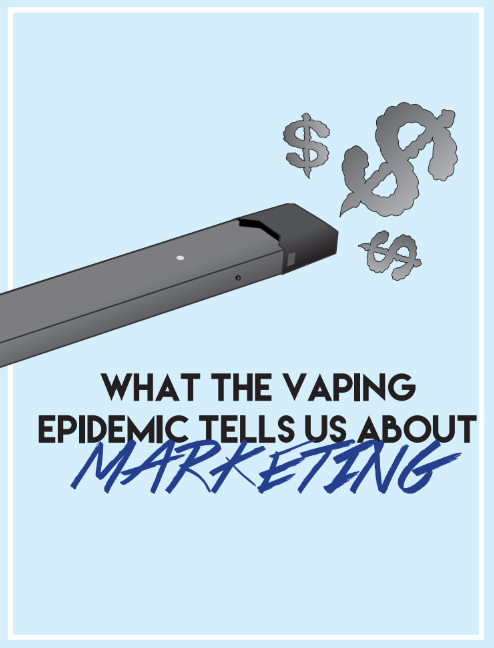 Vaping dominates society today, from an economic standpoint to a social standpoint. Advertisements for e-cigarette companies constantly show up on social media platforms and television channels, which promotes the marketing side of the company as well as influencing societal “norms”. According to BBC,, since 2015, the use of e-cigarettes has increased dramatically because of the decline in tobacco products as well as promotion of one’s social image.

In January, JUUL sponsored a campaign called “Make the Switch,” which encourages adults to quit smoking tobacco products and switch to e-cigarettes. According to CNBC, JUUL has spent $13 million dollars for this advertisement to prove that they target adults and not youth.

Although JUUL tries to convince the public and the Federal Drug Administration that they only promote their products to adults, a large percentage of e-cigarette users tend to be younger, and many people other than adults have exposure to the vaping advertisements. Drug Abuse states that seven out of 10 teens receive ads about vaping, which contradicts JUUL’s “Make the Switch” campaign.

In the past year  — a new epidemic — related to one’s lungs, has risen in teens. E-cigarette companies have recently experienced a sharp decline in their marketing campaigns and regular advertisements due to this “mystery disease.” There has been around 1,080 cases of this illness and at least 18 deaths that link back to e-cigarettes, reported by The Washington Post. The epidemic remains popular in those mostly under 21, yet range all the way to 35.

Despite the fact that this illness broke out, counteracting their claims about advertisement, JUUL continued to  promote their products on television and social media. But franchises, such as CNN and Facebook, have made a statement and will not allow JUUL to use their domain for advertising, according to CNBC.

After the heat of the epidemic has cooled down, the once common e-cigarette ads have diminished and a new wave of vaping ads has emerged. Rather than seeing a push for the use of vaping, social media platforms now have anti-vaping ads emerging left and right. These new pieces of advertisement point out unknown facts about vaping and reveal the truth about the harm it does to the body.

Nonetheless, vaping still has a large role in the advertisement world, but now instead of a $13 million–dollar campaign to encourage the products, its advertising to encourage quitting and telling the truth about what people put in their bodies.