In the four years we spend at Palmetto, many of us find ourselves, our passions, our best friends and our strengths. But some lucky ones find their soulmates.

The same classes we sit in and the same hallways we walk in are the sacred meeting grounds for a few inseparable lovers.

Maria Dao, class of 2004, transferred into Ms. Schlachtman’s AP Environmental Science class mid-semester of her junior year and “stood out like a sore thumb.” Her second day of class, a Hippie-dressed senior named Arnie Dzelzkalns introduced himself. At this point, he was a new classmate. Now, he is her husband.

“I’d fallen for his charm and knew that this was the beginning of our courtship,” Dao said.

The two wasted no time in getting to know each other and quickly had a study date set to prepare for their midterm. Starbucks, 8 p.m.

“I had a stack of books, notes, and pens with me,” Dao said. “But soon realized that I had my work cut out for me as Arnie showed up to study with absolutely nothing on hand… not even a pen.”

Dao anticipated last-minute cramming for her exam, but he had other plans.

“He said, ‘before we study, why don’t you tell me a bit about yourself, let’s get to know each other.’” Dao said.

They spent the night breaking the ice- or lack of- over warm coffee. Hours passed, books stayed shut and a spark combusted into a wild fire. However, Dao had initially said yes to the Starbucks date to tutor Dzelzkalns, so, the following day, she felt guilty for letting their personal conversation overrun the studying. But as it turned out, Dzelzkalns received the second highest score on the midterm, despite his lack of exam prep from Dao.

The innocent coffee date conversation brewed into a deeper relationship. In no time, the distracted scholars were googly-eyed love birds. But almost as quickly as it began, it ended. Well, sort of.

“We dated for a few months and found ourselves in a long distance relationship when Arnie chose to attend the University of Hawaii for college,” Dao said.

The five hour time difference pulled their heart strings, but as true lovers always do, they persevered. The following year, Dzelzkalns transferred to Florida State University to close the distance between the couple. Dao had just started at the University of Florida, and the year in close proximity was a breath of relief after the seemingly never-ending year apart.

Even then, the couple decided to part ways in 2005 when the two had separate travel abroad plans. The distance had taken a toll.

“We had learned from our long distance relationship when he was in Hawaii how challenging it was to keep the relationship strong,” Dao said, “and it would prove to be even more difficult in your early 20’s when you individually go through so much change.”

During the next two years, they each met new people and flourished in their foreign surroundings; Spain for Dzelzkalns and France for Dao.

Come fall of 2007, after a few years of neither talking or seeing one another, the two found themselves in Miami and decided to catch up…over coffee.

“It was a really special day, coming full circle in our relationship,” Dao said. “Our time apart had shown us what we missed in one another and our high school relationship had set the bar quite high for what we expected in our other relationships.”

Almost as quickly as the relationship initially started years before, it picked right back up where they had left off.

“Feeling those same butterflies we both felt five years before, we decided to give our partnership another shot,” Dao said.

And since that fateful coffee date, the two have solidified their local love and married in 2012. This past year, they welcomed their daughter, Vivian, into the family.

“We both feel quite lucky to have met each other a such a young age because we grew up together and became integral to each other’s family,” Dao said, who kept her maiden name.

While Dao and Dzelzkalns stayed together through a five hour time lag, Kamryn Murdock and Nicholas Vaccaro called it off at the onset of a long distance relationship.

“Obviously we still missed each other since we cut our relationship off when it was perfectly fine,” Murdock said. 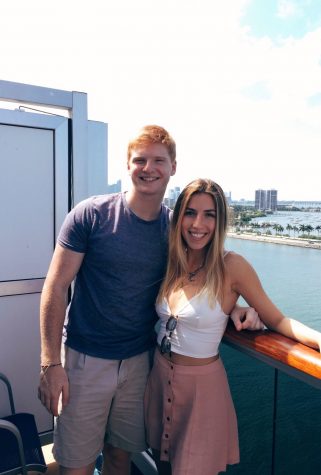 But let’s rewind. Before Vaccaro, a year older than Murdock, graduated in 2015 and began at Florida State, the two dated for nearly two years and laid the foundation for what turned into a unwavering love.

Murdock’s sophomore year, she sat next to a boy who she merely shared a mutual friend with in her AP Art History class. Luccia Kealy, the pivotal meeting point between the two, had been Vaccaro’s initial girl in mind to take to homecoming that year. Yet, his plan was short lived after Kealy said yes to a different date. This seemingly unusual love triangle story has a beautiful ending. Kealy, knowing Vaccaro had no other date in mind, encouraged him to ask Murdock to the dance. Murdock agreed and soon the two hit it off.

“Leading up to that [homecoming dance] we started hanging out,” Murdock said. “Then we actually got to know each other and liked each other.”

While Murdock played on the girls lacrosse team, and Vaccaro on the boys volleyball team, their busy schedules enhanced their relationship as the athlete’s time constraints actually lined up.

“Nick and I were together 24/7 in high school,” Murdock said. “He literally came over everyday after school. And when lacrosse season started, so did volleyball season so it worked perfectly.”

The following year, the couple had Marine Science together. Between their time together in and outside of school, they created quite the bond. So it’s no surprise when the inevitable obstacle of college came their way, they faced life changing decisions. At the time Vaccaro was accepted and enrolled at Florida State, Murdock, only a junior, had no idea where she wanted to attend. The combination of college, uncertainty and distance was enough for the two to call it off after nearly two years together.

Murdock’s senior year, 2016, she did her “own thing” and let the finale of her high school play out.

“In February of last year we started talking more and then I found out I was going to FSU,” Murdock said. “Nick came home from college in April and it kind of just happened.”

The break, as Murdock sees it, strengthened their relationship in the long run.

“Everyone says it’s hard to have a boyfriend in college,” Murdock said. “But it’s super easy for us.”

As fate aligned it, all the pieces fell back in place and the two are in love and together in Tallahassee. 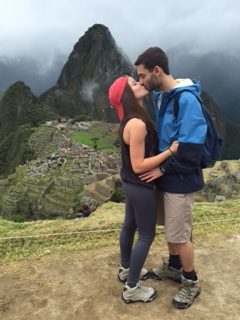 Dylan Solomon and Elizabeth Rosario, both graduates of 2016, gave long distance a go when college demanded the two split paths, but the two of them did not jump into long distance with a shaky foundation. They go way, way back. In eighth grade, the two went on a movie date at Sunset place and shared a kiss goodnight at the end. They dated that year, but Rosario broke up with him after a mere two months. Maybe this was a regrettable decision seeing as though she later confessed her love to him at a party after actively avoiding him throughout the beginning of freshman year.

“The next morning I woke up to a text from Dylan saying that we should just be friends,” Rosario said.

But the next month at a New Year’s Eve party, Solomon clearly sought more than a friend in Rosario.

“As the countdown to midnight began, Dylan slipped his arm around me and at midnight he kissed me,” Rosario said.

New year, new beginning. While the couple had a brief dating history, things were different now. Jan. 1st was the beginning of a love story four years and counting.

“Kissing Elizabeth on New Year’s Eve is easily the best decision I’ve ever made,” Solomon said. “Since that moment, she has brought an enormous amount of happiness into my life and for that I’m incredibly thankful.”

Throughout high school, the couple grew extremely close and solidified a bond that they credit for holding their love together through the distance.

“Nothing in our relationship changed besides our proximity to each other. We figured that if we made it through all of high school by each others side, we could make it through college,” Rosario said. “ We might as well try because we graduated high school hopelessly in love.”

The dreaded college talk was wholly avoided until the time came. Rosario said the pain of talking about it hurt too much, and that they did not even know what they were getting themselves into until the day she dropped him off on his porch and she continued on to Indiana University.

It had been raining that day and the couple, too, held gloomy clouds over themselves. As they settled in to the new lifestyle, they realized the strength of their relationship overpowered the strain of 500 miles. The biggest obstacle in their mind: distance, not trust.

“We don’t stay up at night wondering what each other are doing or questioning whether one of us is cheating,” Rosario said. “We dated for more than three years in high school. If we wanted to be with another person, we would just break up.”

Although Solomon’s University of Wisconsin’s Badgers are no fan of Rosario’s Indiana University Hoosiers, the two will always be on each other’s team.

One Response to “High school sweethearts tell their stories”