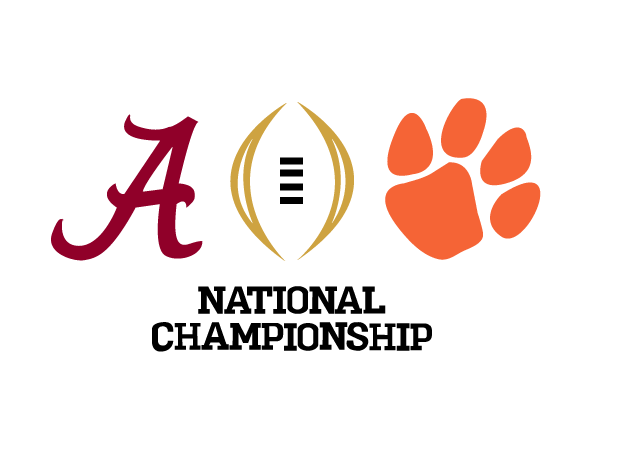 The University of Alabama Crimson Tide (13-1) and the University of Clemson Tigers (14-0) will play for the College Football National Championship game on Monday, January 11th, culminating the second year of the new playoff format. Before watching kickoff at 8:30 PM on ESPN, here are the major storylines surrounding the matchup.

Alabama leads the all-time series between the two teams 12-3. Clemson won the first three by a combined margin of 78-0, shutting out Alabama in all three games during a span between 1900-1905. Since then, Alabama has won 12 in a row and has outscored the Tigers by a total margin of 390-54, while shutting them out seven times from 1909-2008.

University of Clemson Head Coach Dabo Swinney, a native of Birmingham, Alabama, is a graduate of the University of Alabama (UA) and played on the Crimson Tide football team as a walk-on wide receiver in 1989. Swinney then received a scholarship and played until 1992. He was twice named an Academic All-Southeastern Conference (SEC) and SEC Scholar Athlete Honor Roll member. He received a bachelor’s degree in commerce & business administration in 1993 from UA, along with a master’s in business administration from the university in 1995. He served as wide receivers and tight ends coach for the Crimson Tide from 1996-2001 under head coach Mike DuBose’s staff, until DuBose was fired in 2001. Swinney was then hired at the University of Clemson in 2003 by head coach Tommy Bowden as assistant head coach/wide receivers coach, a position he held from 2003-2008. Swinney was named head coach six games into the 2008 season after head coach Tommy Bowden resigned due to a 3-3 start. Swinney has since led the Tigers to a 75-26 record and two Atlantic Coast Conference (ACC) Championships, in 2011 and 2015, along with a 14-0 record and Orange Bowl win during the 2015 season thus far.

The Clemson Tigers (14-0) are vying for their second national championship Monday. Their first national championship came in 1981, when they also had an undefeated record (12-0) and a win in the Orange Bowl, similar to this year’s group. Danny Ford, the head coach at the time, also graduated from the University of Alabama, where he received a bachelor’s degree in industrial arts in 1970 and a master’s degree in special education in 1971.

The Clemson Tigers are looking to become the first Football Bowl Subdivision (FBS) team to get to 15 wins in a season, something that was not possible until the College Football Playoff format was implemented last season. At the moment the Tigers, are tied with the 1996 Brigham Young University Cougars, 2002 Ohio State Buckeyes, 2009 Alabama Crimson Tide, 2009 Boise State Broncos, the 2010 Auburn Tigers, the 2013 Florida State Seminoles and the 2014 Ohio State Buckeyes for the most wins in an FBS season ever, with 14.