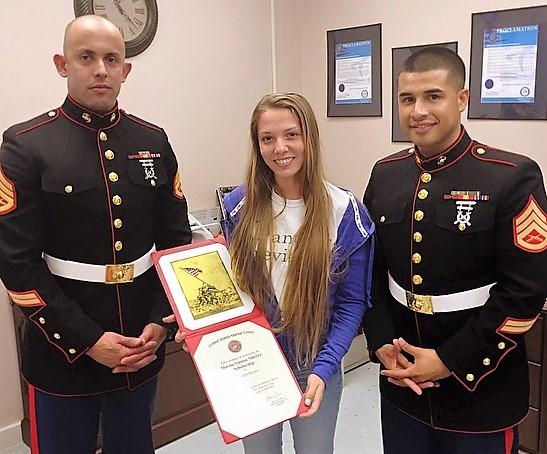 Danielle Brown: Embarking on her journey in the Navy

Isabelle Carbajales, Editor in Chief of The Panther

From what seemed to be a mere conversation with a Naval Officer on a service ship in Boston, Massachusetts during a vacation, senior Danielle Brown would never be the same. The simple event and the captivating words of the officer served as a catalyst to Brown’s lifelong pursuit in becoming an officer in the United States (U.S.) Marine Corps, following the footsteps of her two grandfathers.

Brown, undecided about her future, explored and pursued several potential options for attaining this goal: enlisting in the U.S. Navy and applying to the Naval Academy. With the guidance and encouragement of Naval Recruit Officer Bercenas, she applied for the Naval Reserve Officer Training Corps (NROTC) Scholarship, which she did not expect to receive.

“Hundreds of kids apply to the scholarship,” Brown said. “I’ve worked hard, but I still didn’t think I could be one of the few who get [the scholarship].”

This scholarship requires a series of essays, interviews and an extensive fitness test consisting of a three mile run, crunches and pull ups, among other athletic capability assessments. Brown, nervous for the fitness evaluation, only slept for two hours the night before. Sleep deprivation usually hinders people from performing at their maximum potential, but her display of athleticism proved otherwise.

“My adrenaline kicked in [during the fitness assessment] and I was able to show all that I had worked for,” Brown said.

Danielle had to sit in front of the Early Decision Board, where board members choose from all the remaining applicants and pick only six individuals worthy of the scholarship: Danielle Brown was one of the six.

“Dobbs called me into her office at school,” Brown said. “When she told me I got the $180,000 scholarship to San Diego State, I was completely shocked and of course, extremely happy.”

Brown later reflected on what led her to this success. She accredits Miami Palmetto Senior High School and the people within it for aiding her on route to her goals and ultimately, the scholarship.

“Other schools don’t have the type of education that Palmetto has. It’s the opportunities this school offered me that led me to where I am now,” Brown said.

Beyond the Advanced Placement classes and honor societies that propelled Danielle to her current status, a specific individual in the walls of Palmetto guided her every step of the way: Ms. Dalia Pulido. Brown believes that no person believed in her more than Ms. Pulido. From letters of recommendation to the role of a confidant, Ms. Pulido enabled Brown to make her dreams reality.

“Danielle Brown is pure of heart. Her cheery disposition, endearing smile and unwavering work ethic are worthy of praise and admiration,” Pulido said. “For ten months or so, Danielle was my light and inspiration.”

As Brown embarks on her journey to the Department of the Navy in the Marine Corps, she will keep her favorite bible verse, Isaiah 6:8, ingrained in her mind, as it continues to pay homage to her dedication to serving in the Navy– “And I said, Here I am, send me.”