Beyond the Court: Pep Rally Performers 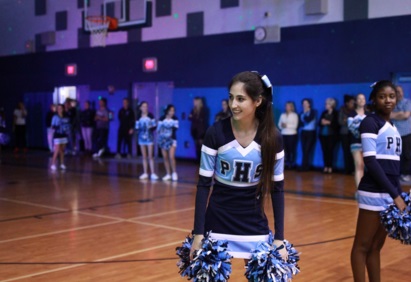 Pom poms shook as students entered Mckinney Court for the winter pep rally.  Expectant students poured into the gym and filled up the bleachers, as thudding speakers marked the beginning of the pep rally for winter sports.

“When the teams come out [there should be] more attention; more excitement,” junior Jack Wheeler said. “Something to catch the viewer’s eye instead of just walking out.”

Students from the crowd were invited onto the basketball court to participate in a free throw contest, hoping to make as many free throws as possible. Students in the bleachers screamed for their favorite contestants as the competition wore on.

“[The free throw contest] was a great way to connect with the audience,” sophomore Joshua Ehrenkrantz said.

Sophomore Joshua Sonner participated in the free throw contest during the first pep rally. He did not win, but he says he still enjoyed being a part of it.

“I got to be in the free throw contest which was pretty fun,” Sonner said. “So that was good, even though I lost.”

Palmetto’s marching band played various songs, under the direction of senior and drum major Jonathan Schleien. For those performing, pep rallies are not just a way to get out of class or watch others perform, but are also a chance to show the whole school the skills they have learned and practiced in their art form, whether it is dancing, or playing an instrument.

“[My favorite part about being in the pep rally is] probably performing in front of the whole school, it is a nice feeling,” Schleien said. “You get to show off your skills and your practice and all the time you take to rehearse.”

The Chatonettes performed a hip hop routine to Justin Bieber’s “Sorry,” which recently bumped Adele’s “Hello” for the top spot on the Billboard Hot 100 Chart in various countries, including the United States.

“I feel confident [when I am in front of everyone], like I can be myself without other people judging me,” freshman Chatonette dancer Emily Dally said. “I think I was stronger in my dancing [than in previous pep rallies] and that I did better.”

“I like all the dancers, but my favorite dancers are the Chatonettes,” sophomore Randall Kulikowski said.

Senior Tierra Pender, who is a cheerleader, felt differently about pep rallies when, after three years of being a spectator at the pep rallies, she became a performer. She enjoyed the performances before, but did not think too much of the pep rallies as whole. Now, she appreciates them more.

“My senior year I decided to become a cheerleader and I love pep rallies,”  Pender said. “I love the behind the scene practices, doing band dances, performing, and having front row seats to all the other performances. It is some[thing] special about being apart of the pep rallies.”