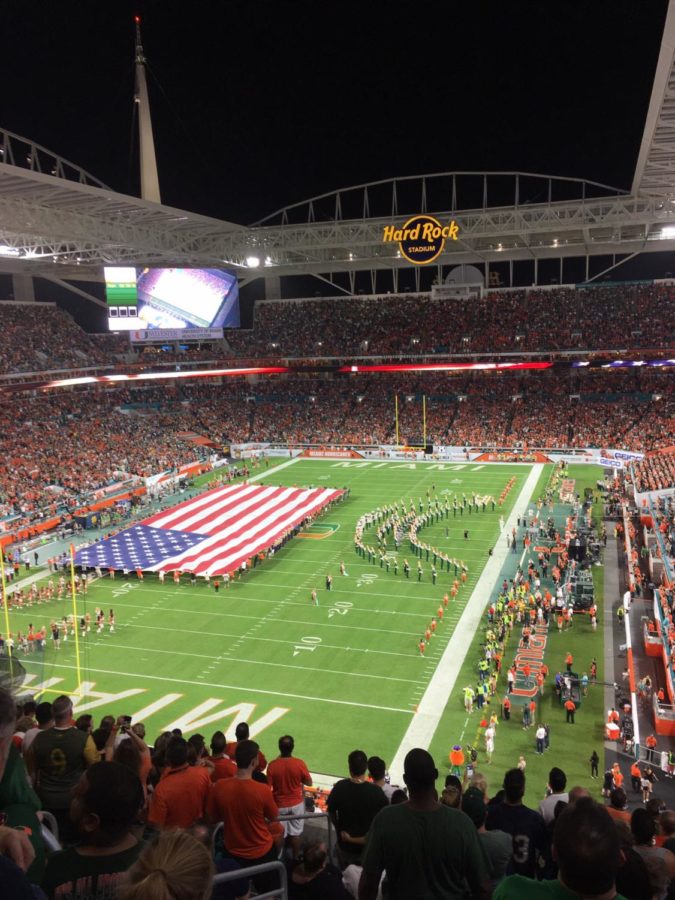 Back, In Familiar Fashion

Bring on the national media hype, the bandwagon fans and most importantly, an ACC Championship and de-facto national quarterfinal against the Clemson Tigers: The U is back.

It was simply a perfect Saturday for the perfect 9-0 Canes. Fans packed the Coral Gables campus’ lakeside patio at the break of dawn and rocked The Rock into the night, and declaration of dominance shook the college football landscape subsequently.

When the Hurricanes prevailed 41-8 against Notre Dame in an unrelenting beatdown reminiscent of the infamous 1985 58-7 contest at the Orange Bowl, nostalgia mixed with newfound hope galvanized a united fanbase.

“This team is destined for greatness later, not now; Miami is a pretender,” sports analysts sang repeatedly. And, who could blame skeptics for talking down a program that has gone through as many scandals as championship seasons this century?

Hurricanes fans now thank the Paul Finebaum’s and Lee Corso’s of the national media following the demolition of the Irish. Skeptics have motivated and galvanized Mark Richt’s disrespected players in year two of his tenure at his alma mater.

For the first time since the Hurricanes were cheated from winning the 2002 BCS National Championship game because of a phantom pass interference, the Canes are a championship contender. Finally, Miami has an indisputable home-field advantage, an unthinkable notion when Donna Shalala mandated the destruction of the iconic Orange Bowl.

The Notre Dame win signals an emphatic end to the year-after-year Hurricane disappointment under coaches Randy Shannon and Al Golden and the true potential of a new yet familiar era at The U. Behind the likes of the wondrous Turnover Chain and a roster of players that believe in each other in times of injury and uncertainty, a signature confidence has been restored to the Hurricanes.

When Coach Richt returned to Coral Gables following his unexpected oust at Georgia, he sought to lead the program to its first win since 2010 against the hated Seminoles, its first ACC Championship and ultimately, a national championship. This season, one of those objectives has been met and the other two are very much within reach.

The Hurricanes are not only back, but are back at the perfect moment: in a city where the Dolphins exist in perpetual mediocrity, the Marlins seek to trade their only superstar and the Heat are all but forced to accept good, not-great results in the post-LeBron years, the Canes are the only championship hope.

Miami will always be an event town. It is irrational to expect the Hurricanes to draw 65,000 spectators to home games when the team, which represents a small private university 21 miles south of its stadium, does not win.

For FSU and UF fans living in the city, it must be difficult to endure the onslaught of trash-talking they have received from Canes fans in the midst of their own team’s’ ineptitude. Years of Gators and Noles diehards telling Miami fans to stop talking about the past amidst superior seasons will soon see a role-reversal when those same fans point to the successes of Tim Tebow and Jameis Winston during heated debate after 3-6 starts.

Years of misery of proud Miami fans made Saturday night even more special. On the heels of the release of ESPN’s 30 For 30: Catholics vs. Convicts a year prior to this matchup, a rivalry reignited. Saturday, the college football universe swept over South Florida households, as the game earned a 15.6 rating, the second-highest ever for a University of Miami regular season game.

The next chapter in the storied legacy of the Hurricanes may soon be documented by filmmaker Billy Corben in The U: Part 3. Saturday night, marked by jubilant dancing and pandemonium in the presence of the magical Turnover Chain, was the turning point in the rebirth.