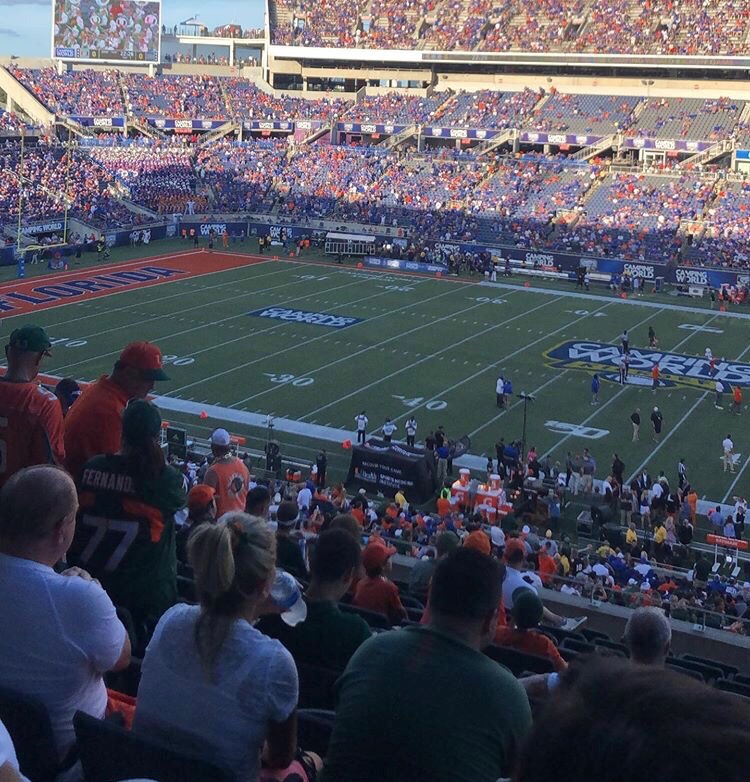 For the annual University of Miami-University of Florida game, fans experienced a wide range of emotions watching the Canes and the Gators go head-to-head to start off the 2019 college football season. In a highly contested matchup, neither team took a lead larger than six points, with the outcome remaining uncertain until the second to last play of the game where the Gators pulled off a win. Here are a few takeaways from a matchup we will be talking about for years to come.

Some fans worried that the Gators would fall off after a successful 2018 season, with Dan Mullen entering his second year coaching and several key players leaving for the NFL. Despite falling behind in the first half, the Gators took control of the game with a strong third quarter, where they outscored the Hurricanes 17-7. With 10 sacks and strong outings from wide receiver Josh Hammond and running back LaMical Perine, the Gators proved they are still a top tier team. The Gators now must prepare to face fellow SEC powerhouses LSU and Georgia in two highly anticipated games later on in the season.

With the offensive line struggling to protect Jarren Williams and multiple mistakes that proved costly for Miami’s comeback attempts, the Hurricanes do still have a long road ahead before they are truly considered “back.” However, this game showed that the program now has a strong foundation for their future, with new head coach Manny Diaz keeping the Hurricanes in the game against one of the best teams in the country. The Hurricanes’s stellar defense forced four turnovers, while the offense produced some solid drives despite the offensive line giving up 10 sacks. Both Deejay Dallas and Brevin Jordan had incredible games that helped keep Miami’s offense afloat. Nevertheless, one player contributed as much as he could under the dire circumstances. That player is Jarren Williams.

Williams faced some scrutiny from angry fans for being unable to produce a touchdown on the final drive of the game, which sealed the Gators victory. However, Williams should not be blamed for this loss, considering how he put forth a solid performance, especially with the context of his situation. This was his first ever college football start and his second time ever touching the field. Additionally, Williams faced off against one of the top teams in the country in a nationally televised game. Most people would crack under the pressure and many analysts expected a poor game from Williams considering his circumstances.

However, Williams put together a solid performance, completing 19 of his 30 passes for 214 yards and a touchdown pass. Williams also threw zero interceptions and while he fumbled the ball a couple times, none of his fumbles resulted in a turnover. While Gators quarterback Feleipe Franks did throw for two touchdowns and 254 yards, he also threw two interceptions and turned the ball over on a fumble in the first play of the game. Franks walks away as the winning quarterback, but considering Williams’s circumstances and the fact that his offensive line let him get sacked 10 times, Miami has clearly found their next quarterback after flipping between graduate Malik Rosier and redshirt sophomore N’Kosi Perry multiple times last season. Williams gave Hurricanes fans something they have wanted from the quarterback position for a long time: hope.

Multiple players had strong outings for the Gators, which helped contribute to their win. However, the Gators would not have won without the bold playcalling of head coach Dan Mullen. On the Gators’ first drive of the game, the Hurricanes managed to force a three and out and thought they had shut down the Gators’ first scoring attempt. However, Mullen called a fake punt and to the surprise of the fans in the stands (and especially the Hurricanes’ defense), it worked. The fake punt led to a 66-yard touchdown after Kadarius Toney took a screen pass from Franks and shook off multiple Miami defenders on the way to the endzone.

This was not the only bold play call from the Gators. They went for it two more times on fourth down later in the game and were successful both times. Later in the game, on the drive that proved to win the game for the Gators, Mullen called for a deep route from Franks to Hammond. Once again, the bold play call paid off, setting the Gators up in excellent field position and leading to a rushing touchdown from Franks. While some expected the Gators to play conservatively due to their higher ranking, Mullen played the game boldly, which paid off, as it gave the Gators their first win of the season.

Both teams maintained respect for one another, with no players being ejected and no fights breaking out. That being said, both teams showed off in their own unique ways last night. The Hurricanes pulled out a third version of their famous “turnover chain,” with this year’s version featuring a flashy “305” attached to the chain.The Hurricanes also introduced their new “touchdown rings”, which are given to offensive players who score a touchdown. The rings spell out “Hurricanes” and add on to the swagger the Hurricanes are known for.

While the Gators did not bring out any bling following big plays, they made sure to celebrate in a passionate manner after the game. Once the final whistle blew, Franks took the game ball and punted it into the stands in celebration. Franks later cited his emotions as the reason he punted the ball into the stands. While some have been critical of the Hurricanes’ bling and Franks’ reaction to the win, most fans love when their team can celebrate in style, from players showing off flashy jewelry to interacting with the crowd in an emotional celebration.

While the game itself disappointed some fans, the Hurricanes and Gators did not disappoint. Defense defined this game, with the Hurricanes forcing four turnovers and the Gators racking up 10 sacks. The Hurricanes and Gators have a home-and-home series scheduled in 2024 and 2025, with each team taking a turn to host the other. Until then, fans will talk about this game for a long time, and rightfully so. One thing remains certain: both fanbases cannot wait until 2024 comes around; until then, they can settle for taunting Florida State.