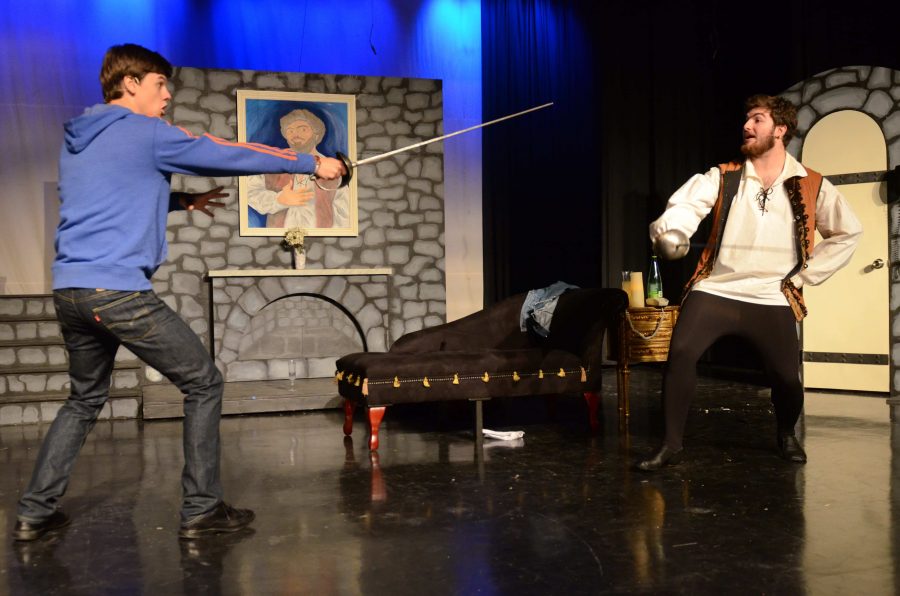 Gallery|6 Photos
Barrymore and Andrew swordfight to put an exciting end to a long conversation.

One dedicated director, a handful of performers and a slew of crew members put together the two One-Acts that brought a comedic light to the complex Shakespearean language that so plagues the current generation. “Slipping Him the Tongue” and “I Hate Hamlet”, both set present-day America in two drastically different environments and gave their audience the giggles they doth needed.

“Slipping Him the Tongue”, written by Mark Aloysius Kenneally

Picture it: present-day rural Georgia, a modest trailer, three friends – and Shakespeare. When Doris (Kylie Bell) tries to persuade her significant other, Wally (Joseph  Moder), to attend a Shakespeare performance for its romance, the day ends in bitter conflict between them, much to Ramie’s (Brandon Azocar) amusement. In his rage Wally swallows the flyer for the event and wakes up the next morning to find that he no longer speaks the local southern-drawl dialect – he can only speak in the language of Shakespeare. The Bard’s curse haunts Wally, but Doris sweetens upon his radical shift toward the romantic language she swoons over, despite her lack of understanding for the words’ meaning. Ramie’s previous high school English teacher – young Ms. Freedman (Sophie Reyes), an avid Shakespeare fanatic and interpreter – arrives to find Wally’s condition stunningly attractive, as does Doris. A Shakespearean insult and a tangled love triangle eventually lead Doris to lament and later make up with Wally. Wally’s southern drawl returns the next morning, to Doris’s dismay, just as Ramie inherits the curse.

The cast of four performed with all the wit and deadpan the Bard himself incorporated into his own literary masterpieces – violence and romance included. A simple trailer with a swinging door, folding chairs and a draped American flag brought the rural South to life along with the Southern drawls that transported Shakespearean language to Georgia. This modern take on the rift between Shakespeare’s most avid admirers and haters gave new meaning to the everlasting presence and impact of the Bard’s literary innovations centuries ago, and brought his words closer to home for new generation.

Television actor Andrew Rally (Nikolai Soroko) lacks inspiration in his career, even after receiving the role of Hamlet for a live audience in Central Park. He finally finds the home of his dreams in New York – a historic building that his girlfriend, Deirdre McDavey (Meredith Flinn), instantly adores. He soon discovers that its previous owner was the late John Barrymore (Sebastian Fernandez), the actor most celebrated for his role as Hamlet and his luck with the ladies. With the help of Andrew’s acting agent, Lillian Troy (Brooke Sterling), who once had a fling with Barrymore himself, and Felicia Dantine (Elizabeth Delfino), his enthusiastic real estate broker, the four decide to call forth the spirit of Barrymore through a séance. Andrew’s guests leave, and the sarcastic ghost of Barrymore appears to give him the advice on acting – and romance – that he needs. As Barrymore guides him through his relationship with Deirdre and a potential deal with television producer Gary Peter Lefkowitz (Lucas Gallo) that he denies, Andrew rediscovers his identity as an actor and love for his girlfriend, and Barrymore disappears.

The cast delivered a performance both witty and humorous from beginning to end in a mature and professional display of contemporary underappreciation for Shakespeare. The advanced set, complete with a staircase, a portrait of Barrymore, stone walls, furniture and swinging door with a doorbell, brought the audience into Andrew’s New York living room. The realistic portrayal of their characters, from the spunky New York broker’s how-ya-doin language to Troy’s no-nonsense attitude and German accent, lent itself to the humor and fluidity of the performance. And toward the end, students and parents alike sat on the edge of their seats in the midst of a gripping battle between Barrymore and Andrew, eloquently fought with realistic stage combat choreographed by Lee Soroko, Fight Choreographer and actor Nikolai Soroko’s father.

But let’s not forget the quick-on-their-feet deck and tech crews. They managed to work the lighting and sound from the control booth so professionally as to create the illusion of thunder and lightning from behind the apartment’s windows, and the deck crew – clad in black – managed to move the set pieces in a matter of seconds in between scenes under the direction of stage manager Aurora Wiley.

Though the curse of Shakespeare once again plagued a set of characters on stage, in this fabulously produced One Act, a ghost from the dead and a few acting friends managed to captivate the audience and reinstill Shakespeare’s legacy into the modern generation.