Thrifting for the Environment 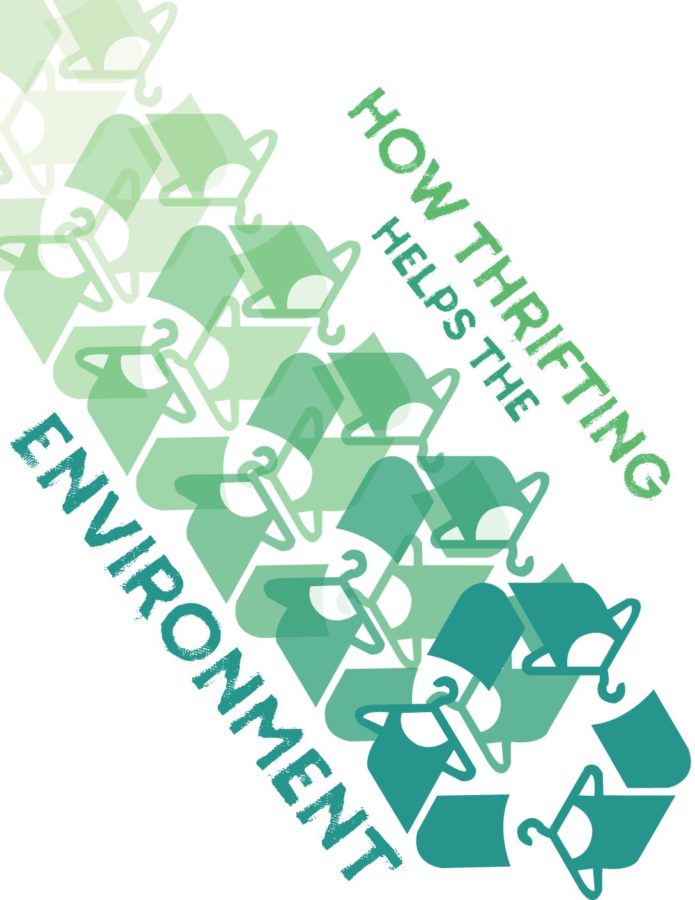 Clothes have deep importance in daily life. From regular day-to-day wear to bold fashion statements, clothes reflect a part of oneself that people do not always see projected through other media. In the age of social media influencers setting fashion trends, clothes often become 20-second purchases. Yet, the fashion industry leaves a crucial mark on the environment. A movement has risen to denounce the detrimental effects of fast-fashion, which refers to clothing brands that produce a high amount of clothes despite the ethical, quality, and environmental cost. Fast-fashion brands constantly release thousands of new products that follow short-lived fashion trends, but the impact that clothes have on the environment creates a massive long-term problem. Thrifting, or buying used clothes, can help reduce the impact of daily fashion statements, and every consumer needs to stay informed on the effects of the clothing industry, so make thoughtful decisions.

Clothes produce lots of waste. The fashion industry produces a lot of waste, and the majority of it ends up in a landfill. According to a 2015 EPA report, textiles and other components create 24 million tons of waste, of which 15 million ends up in landfills. Many of these clothes are being thrown away by companies that no longer see a profit in off-season garments.

“They throw everything out,” said Advanced Placement Environmental Science teacher Pamela Shlachtman. “And even when they change their line, or at the end of the season, if they don’t sell it in the sales, a lot of times they’ll throw it out. A lot of it is made overseas, your carbon footprint to transport that here is also tremendously large.”

A significant contributor to carbon emissions, the fashion industry’s apparel and footwear accounts for eight percent of global climate change impacts, according to the 2018 report Measuring Fashion. This means that 3,990 million metric tons of CO2 are produced by these industries. Excessive and unsustainable consumerism causes this issue.

“People are crazy when buying,” said President and Co-founder of The Recycled Closet (a local consignment store) Jennifer Kaloty. “There are too many choices and stores and sales and it’s just in your face all the time.”

The oversaturation of the fashion industry leads to a massive rate of consumerism that contributes to the unsustainable practices of garment manufacturing.

“They’re water and energy-intensive industries,” said Shlachtman. “Plus the fossil fuels that are used for the equipment.”

According to Textile Exchange, growing one kilogram of raw non-organic cotton fiber uses about 2,120 liters of water. A regular pair of jeans takes around 1,800 gallons of water to manufacture, according to the Student Environmental Resource Center of the University of California Berkeley, and similar effects can occur to most pieces of clothing. In addition, the same pair of jeans also generates the same amount of greenhouse gases as driving 80 miles.

“Cotton farming is very water-intensive, fertilizer-intensive,” said Shlachtman. “The Aral Sea was all to irrigate cotton. Aside from the pesticides, when they get ready to harvest the cotton they’re using a chemical that makes the leaves come off so it makes it easier to pick the cotton, so that’s another environmental impact of it.”.

Studies show that 20 percent of global fertilizer use is related to the cotton farming industry, and practices in the industry often result in severe degradation of the environment.

“Polyester is synthetic,” said Shlachtman. “It came about in the synthetic era so it’s a petroleum-based product, so you’re using petroleum in that process, and it’s really a type of plastic.”

Synthetic materials represent a huge determinant in the growth of microplastics in waterways. According to Dr. Mark Browne, an ecologist at the University of New South Wales in Australia, synthetic clothes shed thousands of microplastics particles in each wash cycle.  Synthetic materials make up 60 percent of the clothes in the world, and they create destructive impacts on the environment.

The most unsustainable part of the clothes manufacturing process, dying, accounts for 36 percent of the CO2 generated in the process, according to Measuring Fashion.

“It goes into the waterways and lot of them are metal-based dyes, and the metal dyes are fairly toxic to use,” said Shlachtman.

Reusing and recycling clothes is a great individual action that can help reduce the environmental effects of the garment manufacturing process. Thrifting proves one of the most effective most environmental and budget-friendly ways to do so. Buying used clothes avoids the manufacturing of brand new garments, and therefore the effects of it.

“We try to get people to shop here instead of going to buy new stuff, telling people that it’s a great value and it’s good for the environment,” says Kaloty. “Now people are really catching on and getting used to it.” The rise in environmental consciousness has allowed more people to open to sustainable consumption options. “A lot of people who wouldn’t do this before are doing it now.”

The Recycled Closet donates the pieces of clothes that do not sell in the store to homeless shelters and organizations such as the Chapman Partnership and National Alliance on Mental Illness.

“An educated consumer is always a very important piece of the component,” said Shlachtman. Thrifting provides a way to give new life to clothes while also helping the environment.  “As if you recycle clothes, reuse clothes, it cuts that chain out.”