The 2nd Annual Battle of the Bands 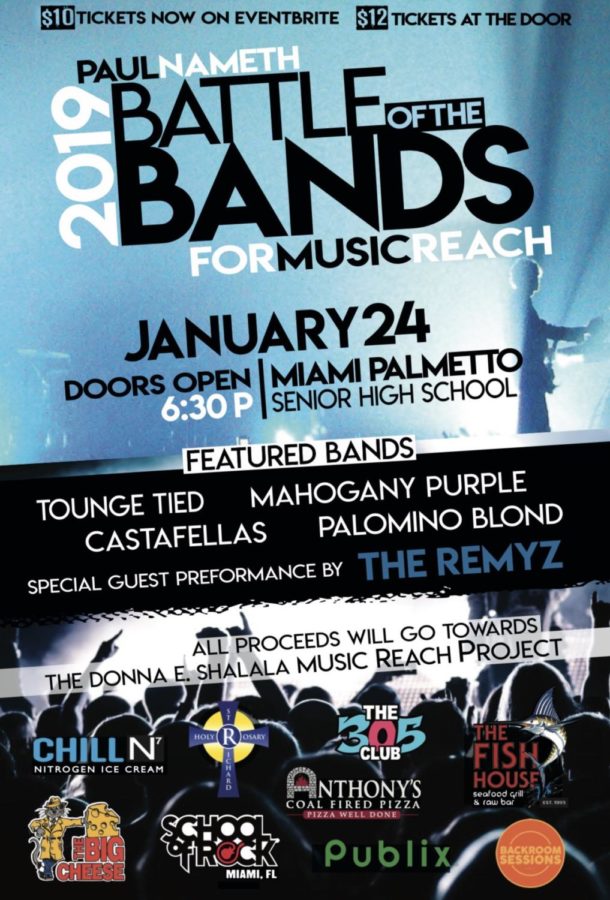 With the strum of a guitar and the pound of drumsticks, junior Paul Nameth’s annual Battle of the Bands will come again in early 2019. At the beginning of 2018, Nameth created a project that embodied his passions while also championing a good cause. He reached out to the Donna E. Shalala Music Reach program at the FROST School of Music at the University of Miami.

“I was originally looking for more like national [charities] that were doing stuff,” Nameth said. “And then I found one at University Miami, because I know they have a great music program and they’re right here.”

Music Reach encourages and nurtures musical development in all students. After coordinating with the head of the program, Dr. Melissa Lesniak, Nameth began preparing his event, and was able to raise nearly $1000 for the charity.

Not only does Battle of the Bands focus on donating to Music Reach, Nameth wants to promote local bands.

“Last year,  I wanted to focus mostly on the youth,” Nameth said. “But this year I’ve gotten more bands that are college age, around their twenties. I think this way we have a lot of really great bands that have a lot of their own content.”

Through Nameth’s own band, PEAR, he was able to connect with several other bands. This year’s setlist includes Tongue Tied, Castafellas, Mahogany Purple, Palomino Blond and a special guest performance from The Remyz, who are Palmetto graduates, which will all have around 20 minute sets.

“It’s a really good way for people to get into the scene and be able to follow the bands that they might enjoy,” Nameth said.

The bands will be scored by a variety of judges with musical backgrounds.

“The prize for the winning band is going to be three hundred dollars,” Nameth said. “It’s a good way to incentivize the bands to bring their fans.”

The event also received many more sponsors since last year, including the 305 Club, School of Rock and Holy Rosary. As well as sponsors, the event will include raffles, including a $100 Anthony’s Pizza card.

“We’re planning to do a raffle for a Fender Starter Pack with a guitar and an AMP for anybody there who wants to get into music or hasn’t been able to,” Nameth said. “There’s a bunch of people who want to play guitar, but not everybody’s gonna be able to go out and buy one.”

Nameth hopes the crowd will have a good time and enjoy the local musical talent.

“By coming out to the Battle of the Bands you’re not only experiencing the amazing local artists of Miami, but also creating the next generation of artists you could be hearing some day,” Nameth said. “Charity and music share a common quality: they benefit everyone.”