Baseball, otherwise known as one of America’s favorite past times, has brought families and friends together, but has also ripped them apart. The sport goes way back to the 11th century under the name “stoolball”, which carried the same concept of throwing a ball at the target and others defending the target. However, baseball did not officially have a proper name or rules until 1845 when people gathered together to create a published rule book for the New York City “Knickerbockers.” As with many activities with a long history, baseball has superstitions that go way back and still permeate in today’s society.

“We have been on a hot streak lately with the school’s baseball team,” junior Garet Huber said. “To keep the positive mojo going, the team has completely stopped shaving as a tradition. It’s crazy how a winning streak can affect a whole team.”

The Curse of the Bambino, a notorious superstition among baseball players, stemmed from the failure of the Boston Red Sox baseball team to win the World Series in the 86-year period from 1918 to 2004. Babe Ruth, “The Bambino”, began the misfortunate when the Red Sox sold him. Before the incident, the Red Sox held five World Series titles, but then rivaled the Yankees when they bought Babe Ruth. The curse became the main point of the Yankee-Sox rivalry.

“I think the rivalry is all good fun,” senior Rachel Davies said. “My family are huge Yankees fans, but unfortunately my brother has played on the Red Sox team for five years and we all laughed at his resentment.” 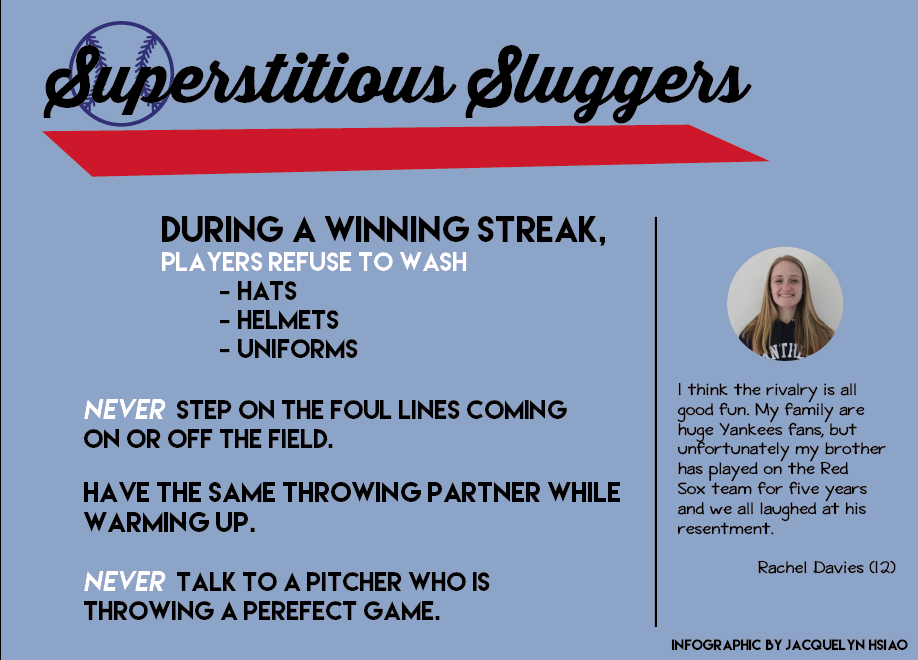 However, many famous players have gained popularity among audiences because of their unusual rituals. Turk Wendell,  former Major League Baseball right-handed relief pitcher, had several odd quirks that set him apart from the others. When pitching, he had to chew four pieces of black licorice before spitting them out at the end of each inning, but only after leaping over the baseline. Meanwhile; Larry Walker, a former Rockies player, had been known as an avid fan of the number three. He went so far that he set his alarm for 33 minutes past the hours, took practice swings in sets of three, and even wed on November 3rd at 3:33 pm. These players continued to carry out their traditions and odd rituals because they noticed a pattern in their plays and truly believed if they kept to the exact behavior the same result could occur.

“I think superstitions depend on how far you take it,” Macroeconomics teacher, Armando Gonzalez said. “They could be hurtful to people personally. For example, if you usually don’t eat until the fifth inning it could hurt you because you’re starving yourself. I’ve seen players getting hurt celebrating home runs and they end up getting hurt and sometimes ruining their career.”