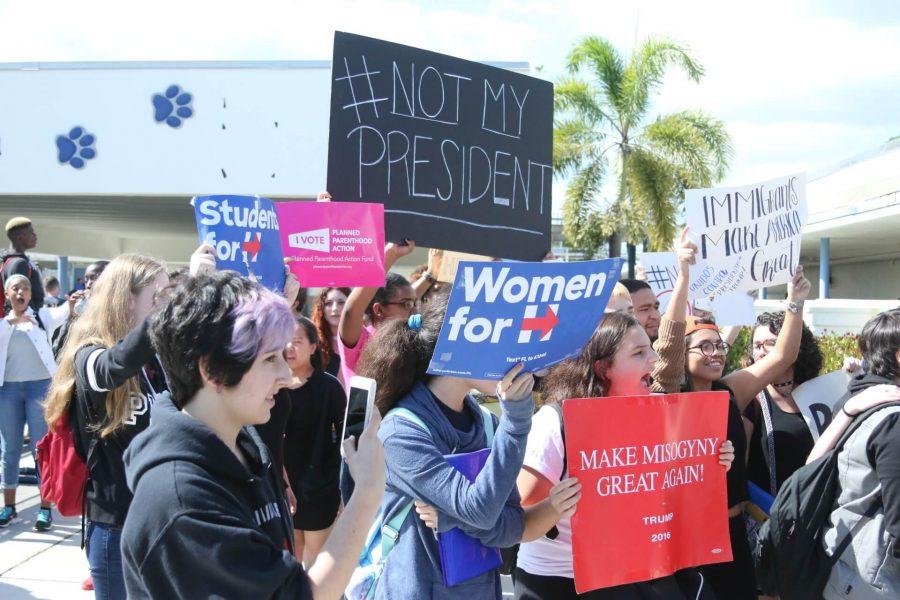 A group of over 20 students gathered in the Miami Palmetto Senior High School Pawvillion today with signs – and voices – rallying against the results of Tuesday night’s election.

Wednesday evening, proponents of the in-school protest circulated a flyer on Instagram, encouraging students to wear black on Thursday and participate in a walkout at the beginning of fifth period. The flyer included the phrases “No Trump, no KKK, no fascist USA” and “When minorities are under attack, what do we do? Stand up and fight back” for participants to chant during the protest.

Juniors Noah Chevallier and Jade Perry started a group chat and added peers interested in participating to organize it, amounting to about thirty people.

Students never ventured off-campus for the walkout as they had originally planned, but administration allowed them to sit on campus and protest for the majority of fifth period.

“It’s nothing against the school,” junior Alexa Drucker said. “We do not condone the hate in this country and we are speaking out against that. This is not a place for hate. We’re not in favor of him, his views or the hate that he’s raised to the surface. He’s not a symbol of the country.”

Participant and junior Maria Garcia felt strong about the meaning behind the protest.

“My thought was that the older generation complain about the lack of the younger generation’s interest in politics and social issues,” Garcia said. “So this is a way of demonstrating that we are not ignorant when it comes to these issues and topics.”

“We were inspired mostly by other high schools on the west coast and the much grander university protests that have happened in New York and California,” Garcia said. “We have a right to protest legally within Miami-Dade County.”

With her country of Colombia in mind, Garcia partook in the protest in hopes of preventing her adopted home from following a similar path.

“I come from a country that is known for dealing with a lot of political drama and angst and revolutions, and knowing that I had the opportunity to leave what would become a repressive regime if my family had stayed there, we were lucky [to escape],” she said. “If a country doesn’t look after the needs of its people as a whole, this is how we could end up. When you think about it in the long run, you can’t help but fear.”

Some students like senior Savannah Hodges thought the protests would not accomplish much.

“Many of the students that protested are not old enough to vote,” senior Savannah Hodges said. “I just wish kids would apply themselves more and if they feel this passionately, they can go to their local offices, write letters, [or] try to make changes in their local communities because it is something they actually have control over as opposed to our nation’s presidency.”

Senior Austin Rodriguez, also disagreed with the protest and claimed they deserved CSI for skipping class.

“Fifteen-year-old kids don’t have enough knowledge on the subject to be protesting against our new president,” senior Austin Rodriguez said. “He is already our president and there’s nothing they can do about it. It was an act for attention. Also, protests cause violence, which is why there was no need [for it] – just an act for attention.”

Although the administration did not issue punishment for those who participated in the rally, it did attract a large crowd of students as they walked to their next classes. No one was injured, although Garcia claimed other students did throw things and rip up posters.

“The only way we can educate people about these things is to bring it up in conversation, have debates on it, and have people share their experiences and stories,” Garcia said. “The hate that people want to cover up is still existing, and if it makes you uncomfortable to talk about it, good. It should, because it’s not right.”