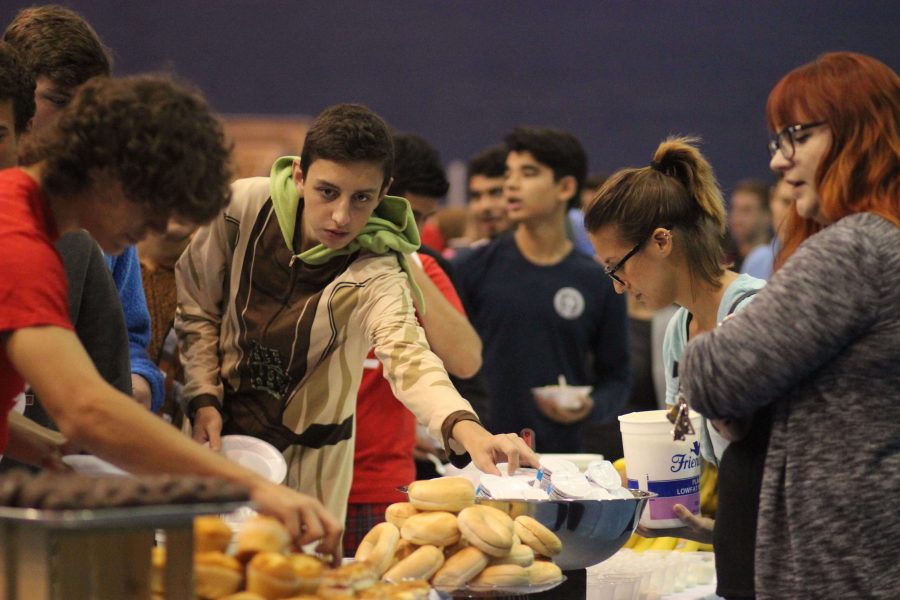 Onesies, plaid pajama pants and robes strutted into the gym for the annual senior breakfast this morning. Seniors walked into the gym, checked their backpacks and got in the long line for breakfast. Once students made it through the line, they set up their blankets and pillows in front of a large blow-up screen to watch the voted on movie “She’s the Man.”

“I thought it was really cool that we got to see a movie from our childhood,” senior Rebecca Rousseau said. “I hadn’t watched it since I was in third grade, so it brought back many memories.”

Unlike previous years, in which school breakfast was served, this year’s breakfast was catered. Bagels, cereal and yogurt were among many of the food items served.

“The coffee was pretty good,” senior Javier Cohen said. “But in my opinion, the Honey Buns were the highlight of the breakfast. I found myself going back to the table for seconds and thirds.”

With over 600 students in the gymnasium, there was a great diversity of pajamas throughout the senior class. Outfits ranged from thick flannel onesies to bare chests. From squirrel, sharks, turtles, cats and dragon costumes to Harry Potter robes, people expressed themselves through their pajamas. The pajama party lasted nearly five hours with movies, dancing and friendship.

In seven months, seniors will be splitting ways on their various paths. Senior breakfast was a way for them to savor these moments together.