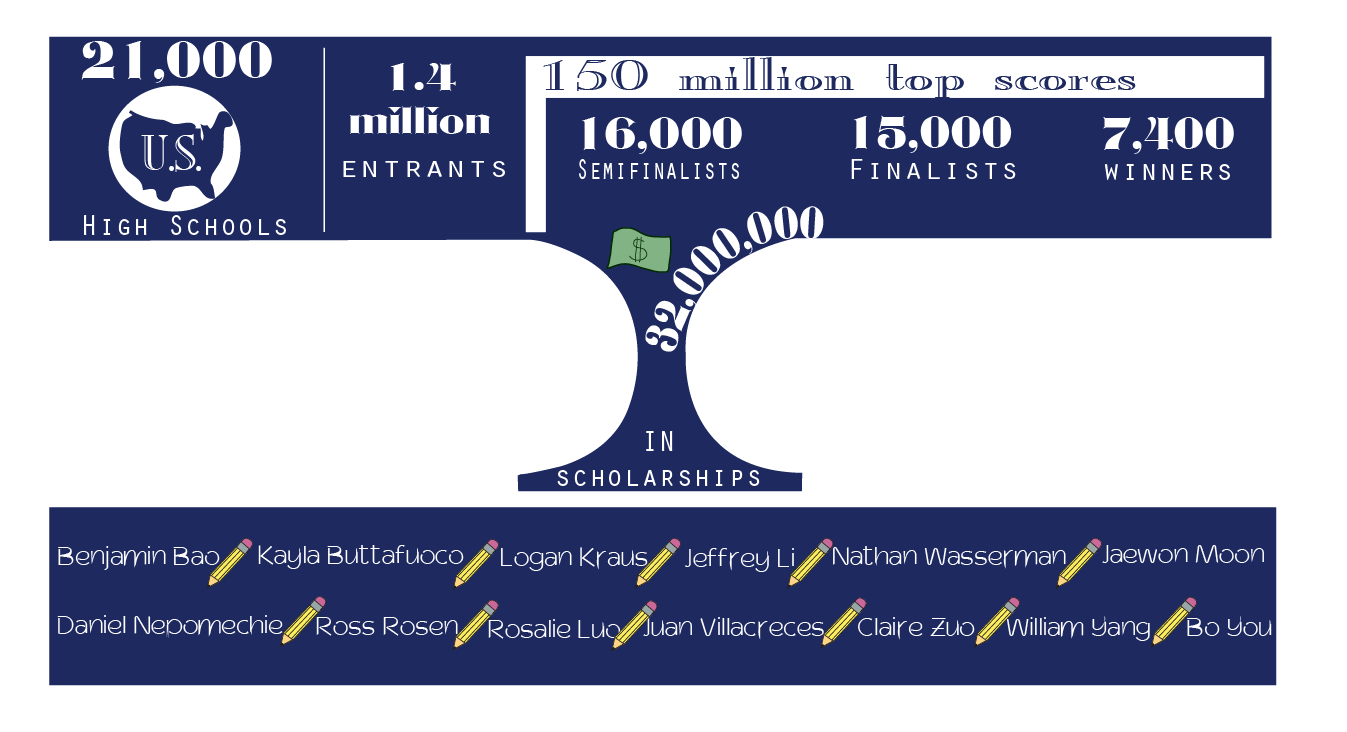 Every October, juniors prepare themselves for the mathematical methods and rigid grammatical rules leading up to the Preliminary SAT (PSAT). In August  of the following year, those same juniors compile their high school accomplishments for senior profiles. An even smaller percent are nominated as semifinalists for the National Merit Scholarship as a result of their PSAT and National Merit Scholarship Qualification Test (NMSQT) scores. This year, seniors Benjamin Bao, Kayla Buttafuoco, Logan Kraus, Jeffrey Li, Rosalie Luo, Jaewon Moon, Daniel Nepomechie, Ross Rosen, Juan Villacreces, Nathan Wasserman, William Yang, Bo You and Claire Zuo qualify as semifinalists for the National Merit Scholarship.

Of the 50,000 high scores, just 16,000 qualify as semifinalists, constituting only the top 1% in the country. From these semifinalists, 15,000 will be chosen nationwide as finalists, when they will compete for one of the 7,400 scholarships.

Although the semifinalists earned their spot with top PSAT and NMSQT scores, the NMSC seeks each student’s academic excellence throughout all four years of high school (up until September of 12th grade).  The areas assessed include grades, course history, work throughout senior year and a record of each student’s transcript,  keeping semifinalists on their toes throughout the first semester of their senior year in order to maintain their standing in the competition.

The NMSC was founded in 1955 as a result of rising concerns that America was not producing a sufficient amount of scientists and engineers. Today, the NMSC prides itself on former winners of the award including Microsoft CEO Bill Gates, theoretical physicist and Harvard University teacher Lisa Randall and Thomas Cech, who discovered the catalytic properties of DNA.

Though it does not guarantee a large sum of money for a scholarship, earning the nomination as a semifinalist proves the work these thirteen seniors have put forth since their first year of high school. Nominations for semifinalists solidify their achievements in academia, extracurricular activities and community service, as well as attracting national attention from top tier colleges toward the scholars’ successes.

“By becoming a semifinalist, you get mail from different colleges,” senior Claire Zuo said. “Even though I’m not necessarily applying to colleges [anymore], it’s pretty reassuring to know there are places I can go and not pay anything just because of this score I got.”

As National Merit scholars will admit, the award is distributed based primarily on the near-perfect scores they achieve on the PSAT and NMSQT. These scores are not the only focus of college recruiters however; seniors’ active participation in large-scale community service projects grant scholars special attention.

“Even though seniors are often thought of as [doing] a single form of charity, community service kind of is an inherently political aspect, whether it’s helping some kind of organized group or a concentrated effort on changing something, I think it’s an aspect of community service that is often forgotten about,” Zuo said. “Community service is inherently, in some way, changing the status quo, whether by donating to a shelter or by doing a community service project that concerns social issues.”

“The people that were in high school looked like they were in middle school,” Luo said. “They haven’t grown into society [and] they’re at school until 8 p.m. everyday.” As the fortunate daughter of a prosperous family, Luo appreciates the opportunity she has as an American student compared to the harsh conditions students in China must face.

While Luo receives a National Merit Semifinalist honor in America, giving her the advantage to potentially attend a top-tier university, students in rural China struggle to receive higher education and support themselves financially.

“You can go to the best school but not get the best job [in China],” Luo said. “It’s such a huge culture shock every time I go.”

These individual acts of benevolence and charity in addition to their qualifying test scores give Palmetto’s National Merit semifinalists the unique touch colleges seek.