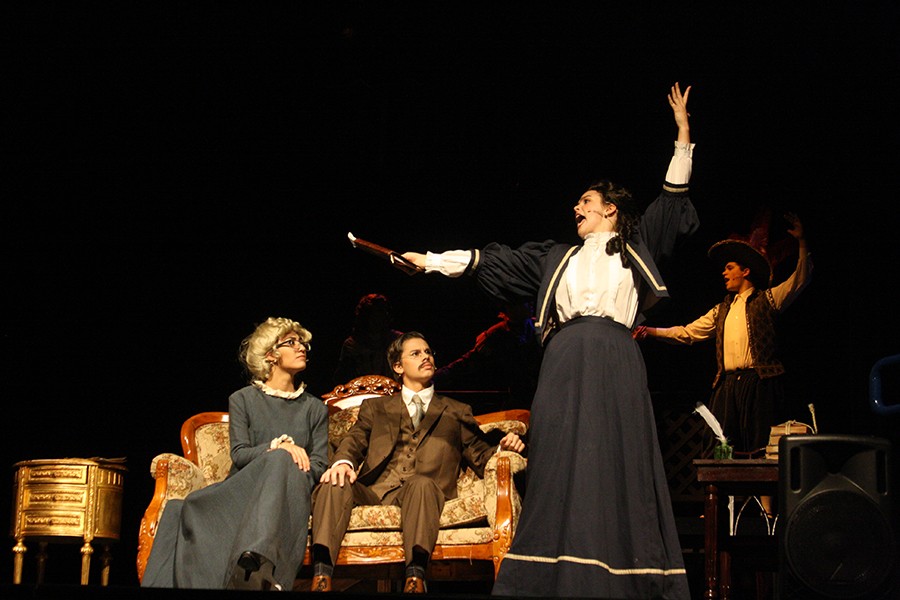 In the midst of the Civil War, emotions pulsate as four sisters grasp tightly to each other for hope. Simple yet elegant frocks and impressive hairdos cast soft, bouncy ringlets across slim shoulders as a young woman passionately pursues her career as a writer. Once again, drama teacher Robin Barson, along with her talented cast and crew, manage to leave the audience with tear-stained cheeks and applauding hands after drawing them into the lives of Little Women.

As their mother copes with the absence of her husband at war, the March sisters struggle to stay close as they each strive for individual triumphs – all, it seems, but Jo. A passionate writer with an intense desire to travel, Jo sends her novel to a New York publisher, maintaining optimism as she awaits approval despite multiple rejections. Deeply affected by intimacy issues within her family, Jo witnesses the changing relationships with her sisters – Meg, Beth, and Amy – as they explore the meaning of womanhood. Uninhibited by her disdainful Aunt March, Jo chooses to ignore the traditional values of society and follow her youthful heart towards the life of adventure and family she ardently creates with written words.

In previous years, Palmetto witnessed an array of professional-quality theatre, yet each year the standards are lifted to unimaginable heights. Though they be but little, the cast of Little Women incites the emotions of the American Civil War as they bring the hardships and relationships to life onstage. By the end, viewers are sure to forget that the close-knit family before them indeed consists of high school students.

Two-time Academy Award nominee and sound advisor Kevin Cerchiai, with the help of the tech crew, certainly made every phrase and high-note clear.  Despite minor technical mishaps, the cast exhibits a concentration unlike anything seen in even the most focused test-takers. The actors’ true-to-life expressions and body language steal Louisa May Alcott’s words from the page and give them a new life in our world.

The music, costumes and set transport the audience back to an era when writers used quill pens, yet viewers are still reminded of the modern world through its humor. In such a moving story, humor becomes a necessity, granting viewers brief moments of joy between bouts of sorrow and love. The colonial characters onstage strangely enter our modern lives through the humorous mannerisms that would be otherwise nonexistent in the 19th century. While this comedy does not offer the most realistic portrayal of the Civil War, the beauty of the musical and its actors serve the audience appropriate portions of both modern humor and historical hardships that relate to our own lives.

Though it is quite possible for these young thespians to create the theatricals without the presence of a visual backdrop, the set enhances the story. High schools typically perform Little Women on a two-story set, allowing actors to effortlessly glide from the first floor to the attic and back mid-sentence. In a clever feat to overcome the mainstream, swift stagehands move large set pieces in between scenes, nearly unnoticed. One instant, Jo flees to a rustic attic as refuge, and in another, friends cluster in the drawing room with an illusion of lavish furnishings, all of which give each scene a 3-D effect, encompassing the entire audience without the use of a second floor.

Professionalism is not new to Palmetto’s drama program, yet again the cast and crew alike exude the professional behavior seen in Broadway musicals. From scene one, it is evident that Palmetto’s Little Women cast spent hours rehearsing into the evening, relishing every moment beneath the lights. Though physically alike on and off the stage, the transition into the fictional characters and past era is a transformation every connoisseur of the arts must experience.