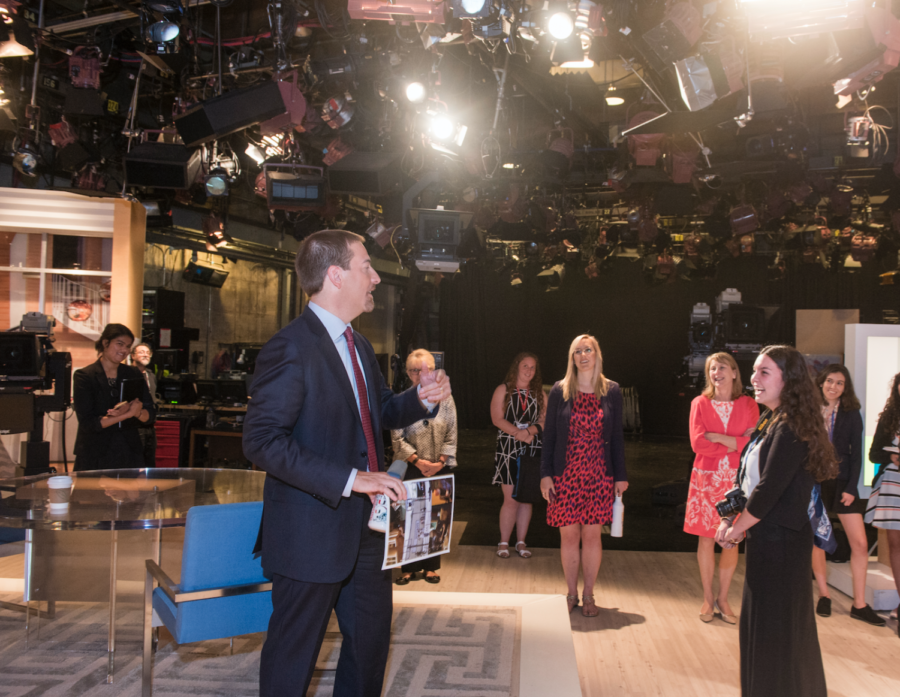 Courtesy of the Newseum Institute

Letter From The Editor

Marlowe Starling, editor-in-chief of The Panther

“Every person you meet has a story.”

That phrase has echoed in the back of my mind since the hot June day when Sara Ganim, CNN reporter and 2012 Pulitzer Prize winner for her work exposing the Joe Paterno and Jerry Sandusky scandal at Penn State, spoke those seven simple words via Skype video call. Although I only met her through a blown-up screen projection, her advice to young journalists lit a fire within me I never knew existed. She gave me hope, she reassured me that journalism is not dying and, most importantly, she emphasized the responsibility we have as journalists to convey emotion through words and tell the stories that lurk within every human being.

I am humbled – and proud – to not only lead The Panther as Editor in Chief, but also to say I was selected as the Florida representative for the Al Neuharth Free Spirit and Journalism Conference in Washington, D.C., this past June (and I repped the 305 pretty darn well, if I do say so myself!). Over the course of my all-expenses-paid trip – a total of six days that flew by way too fast – I met dozens of the biggest names in journalism, and more importantly, the time I spent bonding with 50 other journo nerds like me from around the country cemented my desire to make a significant contribution to journalism in my future–starting now.

I landed in Ronald Reagan airport on a Saturday without a clue about how to exit the terminal or what new faces I would meet that day. Not until we started meeting Pulitzer Prize winners and news network hosts and Capitol Hill reporters did I realize how special–how monumental–this experience was, and how many opportunities lay before me.

I could write a book about how much the experience meant to me, but part of the thrill was representing the Sunshine State. Much to my surprise, the Wisciscon representative, Sasha Milbek, shares my intense sports fandom for the Miami Hurricanes (who knew?), and answering questions about my opinions on local politics – notably regarding Senator Rubio – was a form of entertainment in itself.

The real kicker came when we visited NBC Studios to watch a live recording of Meet the Press, hosted by George Washington University and Miami native Chuck Todd. I, the proud Miamian, ran out to the Hallmark store 15 minutes before they closed the night before I left the next morning to grab the last Miami Hurricanes mug they had in stock, and lugged it with me in my suitcase. My intentions were humble – I only wanted to give him the mug and a copy of a student-produced news magazine I helped create at the University of Miami since I knew he grew up here – but lo and behold, in front of over 75 people standing smack in the middle of his studio, I heard his production manager utter the words, “and before we go, I believe someone has a gift for you.”

I shuffled forward, Nikon camera dangling around my neck like a sack of flour, and struggled to find the words I had prepared for the entire plane ride up. With a mixture of embarrassment and pure ecstasy – I mean, I was just inches away from Chuck Todd, one of the most renowned faces in broadcast journalism – I told him how I knew he grew up in Miami as a Canes fan, and gifted him my strange Miami souvenirs. He asked what school I attend, so yes, I also repped Miami Palmetto Senior High, and he joked with me about how his alma mater, Killian, had a better football team than Palmetto in a playful conversation only he and I understood in a room full of people from across the country. It turns out his dad went to Palmetto, and back when they both attended, the Killian-Palmetto rivalry was much more heated than it is today (notably because, well, we’re a heck of a lot better than Killian now). But long story short, I got to shake his hand, and my Miami Hurricanes mug from Hallmark made it on his shelf of mugs collection.

Throughout the entire conference, conversations like that happened constantly. Almost every print journalist who spoke to us – no exaggeration – has worked at the Miami Herald or Sun Sentinel at one time or another, which made me realize just how lucky we are to live in a city with such a notable national newspaper that we often take for granted as a place to look up last night’s high school football scores or to read a local current events article for Ms. Perse’s class. No one will ever quite understand the sense of pride I felt as the only person in the room who could understand and nod her head at the stories they told about our relationship with Cuba, about the Elian Gonzalez story that won a Pulitzer, about the intense effects of climate change and our unique melting pot of cultures and ethnicities.

Even the Neuharth family formed a special bond with me that few others had the opportunity to create. I had no clue that Al Neuharth, a South Dakota native, moved to Florida and started a paper called Florida Today; it was the predecessor of the now world-renowned USA Today, so he and his family have a special place in their hearts for our state.

The biggest honor, even more than adding to Chuck Todd’s famous mug collection, came when I received my table assignment for the Newseum Awards presentation and found my seat among the Neuharths. There I was, a 17-year-old Palmetto student, sitting across from Al Neuharth’s daughter and next to his granddaughter, in addition to the rest of their family, all of whom hold jobs as journalists in some shape or form. My nerves and initial shock obviously delayed my sense of reasoning because not until 20 minutes later did I realize only me and the South Dakota rep, Cody, sat there with them because of Al Neuharth’s roots in both of our states. I distinctly remember making sure I knew which knife to use – the blunt one or the pointy one? – for the fancy pear salad appetizer and trying so hard not to chew unattractively. I got over that real fast once they started talking to me about Florida and what a beautiful and dynamic place we live in. I only wish all of us could have been there to hear them speak so lovingly about the place we call home.

At that awards ceremony, this year’s recipient – Martin Baron, editor of the Washington Post and previously the Boston Globe, where he led the group of journalists who unmasked the Catholic church’s coverup of child molestation, as depicted in the movie “Spotlight” – also worked at the Miami Herald. He just so happened to work there when the Elian Gonzalez story broke, the story about a young Cuban boy who was raided in his relatives’ home and forced to leave the U.S. in a controversy still relevant today.

To sit there directly beneath the stage, looking up at Martin Baron’s sparkling eyes that held in them all the years of experience and vital storytelling, and knowing that he made one of his historical contributions at our city newspaper meant more to me than everyone else there. It made me value our city, our newspaper, our ability to make a change right here at home even more. It made me realize that our generation – you and me – is very much disconnected from our past and from our identity as South Florida residents.

In all the moments in between, from learning about new cutting-edge camera equipment to learning how to capture the essence of pain and sorrow and joy through the powerful written word, I suddenly became endowed with a task I have yet to live up to. In those six days, I became more than an amateur journalism representative for Florida; I became part of an alumni network, I became a young journalist, I became somebody tasked with the responsibility of making a difference not just here at Palmetto, but in the world. In truth, it marked the beginning of my career as a journalist, whether I enter that field or not.

I returned to Miami International Airport sentimental – certainly because I missed the new friends I made from across the country, but also because I realized just how important it is that our generation takes the world’s current issues seriously because we must step up in a few years and figure out how to fix them. And I came back with the assurance that journalism will not die, because we have found ourselves in a time when it is necessary for all of us to fact check.

I wanted to share this with The Panther’s readers because I want our student body and staff to know that we are not just a high school newspaper. The Pulitzer Prize-winning Sara Ganim (who is familiar with our very own Miami-Dade County, by the way) and Chuck Todd and David Fahrenthold and the wisdom-ridden historical Freedom Riders and even Al Neuharth all made their start small. None of them woke up one morning a sudden gamechanger; they had to work toward it, and it started with a genuine passion for making the world a better place.

Here at The Panther, we want to do just that. We want to tell the stories of each of the students here, we want to deliver all relevant news to our student body because each student deserves that information.