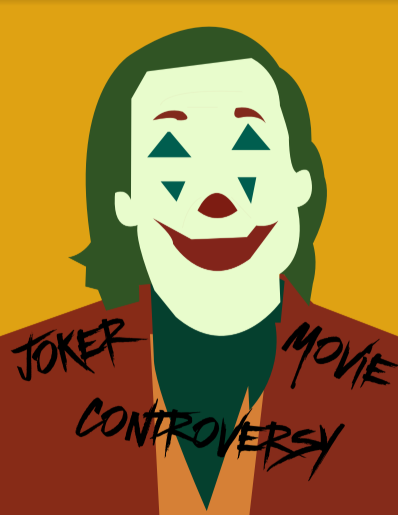 Even before its release on Friday, Oct. 4, 2019, the “Joker” movie made headlines due to its controversial portrayal of the main character and its connection to the 2012 mass shooting at a showing of “The Dark Knight Rises.”

For one, the movie is filmed in a way intended to elicit sympathy for the Joker —  played by Joaquin Phoenix — a psychotic mass-murderer. He is almost portrayed as a protagonist, or at least a victim.

“The movie glamorizes…[the Joker] even as it shakes its head, faux-sorrowfully, over his violent behavior. Is he a villain or a spokesperson for the downtrodden? The movie wants it both ways. Its doublespeak feels dishonest,” TIME Magazine critic Stephanie Zacharek said.

The premise of violence and shooting as a response to bad luck hits a little too close to home, especially in America, where there have been 283 mass shootings in 2019 thus far. Arthur’s story is disturbingly similar to the story of many a real-life mass shooter.

“In America, there’s a mass shooting or attempted act of violence by a guy like Arthur practically every other week. And yet we’re supposed to feel some sympathy for Arthur, the troubled lamb; he just hasn’t had enough love,” Zacharek said.

Others agree with Zacharek’s analysis of the movie’s unsettling portrayal of Arthur as a sympathetic victim of circumstance.

“When I watched the ‘Joker,’ I thought we were supposed to root for him or something. The movie made it seem like he was just unlucky,” sophomore Josie Blohm said.

Additionally, the movie is inextricably tied to a shooting during a premiere of “The Dark Knight Rises.” In 2012, James Holmes killed 12 people at a midnight showing of the third Batman movie in Aurora, Colorado. While it has since been refuted, the rumor that Holmes dressed and referred to himself as the Joker during the shooting ensured that the public forever connected mass shootings to Batman and the Joker.

“When we learned that Warner Bros. was releasing a movie called ‘Joker’ that presents the character as a protagonist with a sympathetic origin story, it gave us pause. We want to be clear that we support your right to free speech and free expression. But as anyone who has ever seen a comic-book movie can tell you: With great power comes great responsibility. That’s why we’re calling on you to use your massive platform and influence to join us in our fight to build safer communities with fewer guns,” relatives of the victims of the Aurora shooting wrote in a letter.

In response, the Studio wrote: “Warner Bros. believes that one of the functions of storytelling is to provoke difficult conversations around complex issues,” read a statement from the company. “Neither the fictional character Joker nor the film is an endorsement of real-world violence of any kind. It is not the intention of the film, the filmmakers or the studio to hold this character up as a hero.”

Due to the movie’s portrayal of distrubed characters and its connection to the shooting, there are fears the on-screen violence may lead to real-life violence.

“When I went to watch [‘Joker’], I was concerned there might be violence, especially because of what happened during [‘The Dark Knight Rises’],” said Blohm. “But I could tell everyone was being extra careful about security.”

According to an FBI intelligence bulletin, a new subset of incels called “clowncels” has arisen — however, they have not been deemed dangerous. Additionally, according to USA Today, police in Huntington Beach, CA have already had to shut down a showing of “Joker” after a credible violence threat. Measures to prevent tragedy include parental advisories, police presence at many theaters and the banning of masks, weapons and toy weapons. While nothing has happened yet, safety concerns have given both theaters and movie-goers pause.