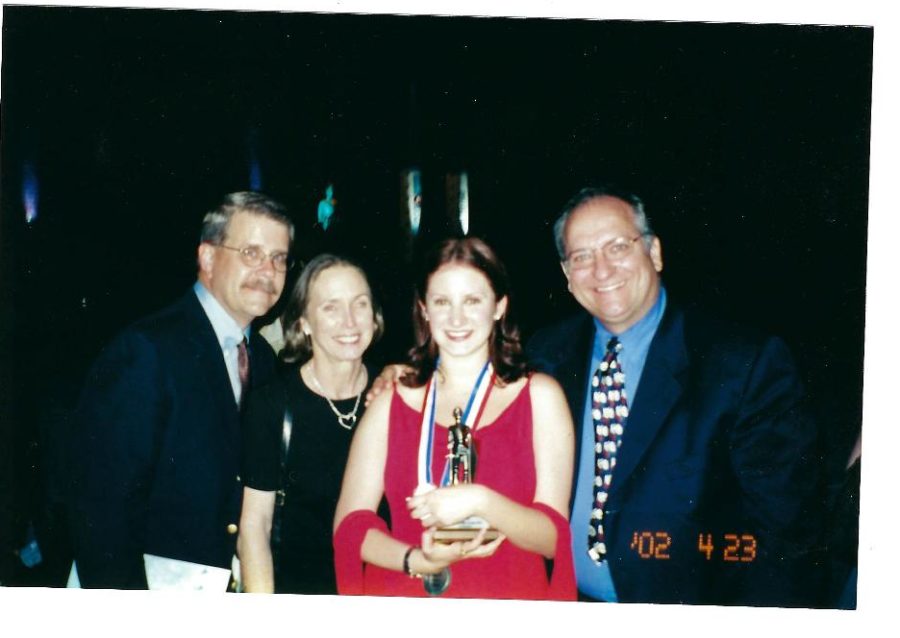 Co-founder of Soffer/Namoff Entertainment Jen Namoff once found a safe haven in room 118 at Palmetto; now she leads the busy life of a highly acclaimed Talent Manager and Producer in the Big Apple.

Over the phone, I hear an automated female electronic voice requesting change.

Although she can now navigate the New York City roads and regularly works with her famous clients – Javier Munoz, the current “Hamilton” lead, Tituss Burgess from “Unbreakable Kimmy Schmidt,” Jack Falahee from “How to Get Away With Murder” and stars from “Grey’s Anatomy,” to name a few – she was once a Palmetto Panther under the guidance of then drama teacher Rick Adams. She graduated in 2002.

“He was an incredible inspiration to all of us, and I still keep in touch with some of my comp buddies, my troupe 1298,” Namoff said.

Without the troupe – and without her teacher – Jen may not have followed the path that led her to her current position.

“Working on the shows and working with Mr. Adams, who was so passionate about everything and [about] us, he was just amazing and he really made me love theatre,” Namoff said.  “I don’t think I really knew how much I loved theatre until I got into comp and did those shows, so I think Palmetto had a huge part of my falling in love with the craft of it.”

As a manager, she communicates with actors on Broadway, television and film, and she produces for Broadway and film as well, including her Broadway revival of “How to Succeed in Business Without Really Trying” (originally starring Daniel Radcliffe), which was selected as a nominee for Best Revival of a Musical at the 2011 Tony Awards.

“I love what I do, and I think that’s the key to making it work for yourself,” Namoff said. “I never wanted to do something that felt like work.”

But at Palmetto, she started out with her eyes on acting, before realizing at Syracuse University – her alma mater – that she really wanted to pursue directing. She graduated with a double major in acting and directing along with a degree in communications.

It was not until after her big move to NYC that she began interning, gaining experience on the business aspect to theatre, and while working for casting directors, someone suggested she pursue a talent agency. She worked for four years as an intern at the talent agency Leading Artists, and found herself moving toward managing, where she would be free to combine her work with actors with her creative mind for production.

“The manager is the captain of the ship,” Namoff said.

And she loves it.

“It’s never the same day. You could be one day with Tituss, to reading scripts from the ground floor that end up becoming Oscar winners, and having relationships with clients,” she said. “I’m always excited to see them achieve their dreams. It’s the most rewarding part of it.”

But her inspiration to pursue directing went much deeper than simple job-searching. During Jen’s sophomore year, she lost her best friend. The entire Palmetto family mourned the loss of the beloved Helen Witty, who was hit and killed by a drunk driver while she was rollerblading. Her passing away devastated the community and left a significant imprint in Palmetto’s past.

“I remember being on the phone with Helen for hours, trying to figure out who was going to be cast in the show, back in the day when we called people from our home phones,” Namoff said. “I became interested in directing because of Helen, because she was directing right before she passed for the One Act festival, so that’s what made me start because I knew that I had to fulfill what she was doing, so there was definitely a lot of learning and a lot of just finding out who we were.”

Namoff attributes the majority of her own success to the respect she always held for Helen.

“She’s a big part of my story, so when she passed, I started the Helen Witty Walk-a-thon,” she said. “It changed the whole imprint of my life because I grew up insanely fast, when you lose your best friend in high school, but it also invented the passion for the craft, which she loved more than anything.”

Although she only had two years with Helen – up until their sophomore year – the impact she had on Namoff ignited in her a burning desire to do more.

“Afterwards those [years] were crystal clear because they were so focused on living her honor out,” Namoff said. “We all bonded because we were all there for each other – another reason why the high school years were so meaningful and important that we did it right and did it in her honor.”

During her time as a Palmetto student, she performed as Yente in “Fiddler on the Roof” and won best supporting actress – a trophy that still sits in her childhood home – and she also participated in “Anything Goes,”  the Florida State Thespian competition, and the Florida Theatre Conference.

“My senior year I was thespian president,” Namoff said. “I jumped into a leadership position because that was Helen, she was the leader of our group, so I had to do her proud.”

Although drama teacher Robin Barson never taught Namoff directly as a student, the two met when Namoff was just fourteen years old at the JCC working on “Fiddler on the Roof” and has played a prominent role in her life.

“She’s an amazing woman. She’s been like a second mother to me,” Namoff said. “She’s been such a light in my life and [was] always there for me.”

“She has a real passion for the theatre. She loves it, and that’s infectious and important when inspiring children and young adults who need to love it,” Namoff said. “Both are really great examples of the passion and dedication that is required to work in this business. She’s been a really great addition to Palmetto, and I couldn’t think of anybody else who is a better fit for that place.”

The drama troupe served as her anchor for the four years she spent as a thespian.

“We became a family, it was our own little cocoon,” she said. “The people I knew [at Palmetto] were the forty people of the drama troupe, and we spent every waking moment together.”

Namoff’s words of wisdom are enough to inspire anyone with massive ambitions to go out and take life by the horns.

“Keep following your dreams and know that it doesn’t happen overnight,” Namoff said. “You have to love it. In this industry and business, you have to live and breathe, eat, sleep and drink it, and there’s a certain amount of passion you have to have. Just walk in the room and put out in the universe what you want to happen, and it will. Always stay true to who you are and never give up.”

One thing Jen Namoff knows for sure: Palmetto remains a part of her through her journey as a thespian and as a professional.

“My time at Palmetto was extremely amazing, and it feels like forever ago but I know that there were so many great teachers and friendships and a lot of learning, and I’m anxious to see what kind of stars come out of there.”