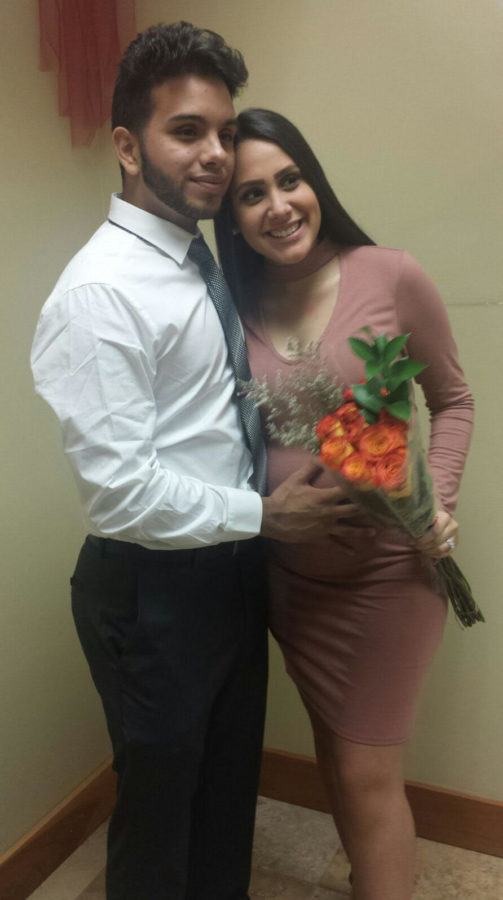 It’s worth the struggle

This is the extended version of the Feature story off of our recently published Love & Sex issue.

Overcoming social expectations, bracing for new challenges or overcoming cultural differences are just a few factors in the struggle to maintain romantic connections during the four years most students spend before entering adulthood. As many of these same students try figuring out themselves, they persistently work to put their relationships first. Despite the struggle that ensues, somewhere along the line, they decide it must be worth it.

Seniors Alison Calvo and William Borrows started dating a year and a half ago when Alison had gone through a stressful situation, and instead of prying into the specifics of what might have been eating at her, William took a different approach.

“He was more interested in trying to get my mind off of what I was thinking then finding out what was going on,” Alison said.

Much like a lot of teenagers, anti-social antics, impatience and short tempers made making friends somewhat of a challenge for Alison. Even William admitted to being much less outspoken before meeting her.

“Sometimes I don’t have patience with people and I do come off as mean,” Alison said. “Everything gets me pissed off. He’s helped me overcome that because I took that out on him sometimes.”

The two talk through through their issues, and so far, their relationship comes out on top of all the unimportant arguments and anger attached.

“I couldn’t always blame her, she always tries to be perfect and when she comes short she’s so upset. I do everything I can to help her,” William said. “A lot of times we would just go out together to just clear our minds.”

“All of that doubting happens when you’re heated up in the moment,” Alison said. “Everytime I cool down from anything that ever happens I think back and I’m like, no way I’m going to leave my relationship over this little thing.”

After their first outing on the beach, the two hung out again in groups multiple times, then began texting and started dating a week before the start of their junior year.

Alison’s family, like many in Miami, only speaks Spanish, while William’s only speaks English. For any person, let alone a teenager trying to appeal to his girlfriend’s parents, language gaps create barriers between people and can lead to misunderstandings.

“Having a conversation with her family is kind of hard, but I can get things out,” William said. “It made me want to learn Spanish so I could understand what they’re saying.”

Besides the language gap, several cultural differences, like Alison’s Costa Rican family not celebrating certain holidays like Thanksgiving, can create gaps in understanding, even when they speak the same language. William’s family found some jokes funny that Alison did not understand, and things that Allison found funny but William did not understand. Yet in their relationship, these confusing little instances only improve relations between the two families.

“If anything, it makes it funnier, because he’ll try to say something in Spanish and they’ll laugh,” Alison said.

“I feel like because there’s such a difference between our complexion, we get singled out more because of it,” Dominique said. “I’m not saying that it can’t happen across other combinations, but I just feel like because it’s black and white, there’s so much more that people want to say for whatever reason.”

“It’s actually seen as more ‘Oh, either maybe he just has a thing specifically for black girls’ or on my side they might interpret it as ‘Oh, she’s too good to date a black guy,’” Dominique said.

Sometimes when passing by groups of different people, Dominique and Nicholas received snickers or judging glances. The strength of their relationship, from a year and ten months of being solid best friends who complement and care for each other, makes this challenge solely an external pressure from Nicholas’ point of view.

“Every now and then when we walk together, we’ll get a weird feeling. It’s happened a lot, but we’re honestly used to it and all of our friends don’t care about it,” Nicholas said. “We don’t get that feeling from them, so it doesn’t really bother us that much.”

Senior year also holds its individual challenges for the two when considering the possibility of a long distance relationship. Both Dominique and Nicholas applied to schools in Florida, but Harvard still lingers as an option should Dominique get accepted. If Dominique’s choice came down to Harvard, her dream school, and University of Florida, being near to her boyfriend, Nicholas considered his reaction.

Senior Dominick Diaz plans to stay in state to maintain his own, very different relationship.  He met Isabella Diaz DeQuesada as a ninth grader in March 2014 at the Kendall Ice Arena. She said she was in eighth grade and the two began dating. A time afterward, Dom learned Isa lied.

“He ended up finding out about my actual age and I guess a freshman and a sixth grader wasn’t his thing, so we stopped talking,” Isabella said.

When the two began building their relationship up again in September 2016, they made serious changes to keep a relationship with the age gap. Dom had to get over the stigma of dating a freshman among his senior friends, and eventually pushed aside his view of Isa from the parties he knew she attended.

“Party girls are not the best. I thought she was one of them, and I know how they are,” Dominick said. “They try to finesse and make you think that they’re interested when they’re not, and I’m not stupid so I was always on her.”

Meanwhile, Isa pushed Dom to look at her as a whole person, rather than just a freshman, an aspect of her identity his friends protested regularly. She encouraged him to push aside their preconceived notions of who she was, opinions from people she felt did not even qualify to be considered his real friends.

“People [were] going up to him being like ‘You’re dating a freshman you’re going to jail’ or something like that. He had a really hard time seeing past,” Isabella said. “He told me that’s why it took him so long to want to be in a relationship with me. Because he would be like ‘I just need to figure out how to tell people I’m going to date a freshman.’ It was like this big thing.”

To break through the reputation that precedes Palmetto party girls and win over Dom regardless, Isa changed her ways. She stopped going to parties and got serious about prioritizing their relationship.

“I just think it’s really crazy how she did all of that for me,,” Dominick said. “She changed a lot of my views. I feel like it made me softer. That’s a fact.”

The fear of drawing apart when Dom goes to college remains in their relationship. Dom changed his future plans to stay locally to accommodate their relationship. While some senior couples fear long distances, they struggle with an age gap that may feel even larger.

“I don’t know if I like him changing what he’s always wanted to do for me,” Isa said. “I want the best for him obviously and he’s going off to college and I’m gonna be a sophomore. I’m worried we’re gonna lose each other.”.

Dom believes something lasting exists between the two , even with the possibility of change in the future and others’ reaction to the age difference.

“I actually don’t even think about her age unless someone reminds me,” Dom said. “I have never been so interested in someone. We’re crazy about each other.”

Seniors Jhennifer Hernandez, 17, and Bryan Zarate, 18, feel similarly about each other, except their largest difficulties within their relationship lie not in an age difference.

“As everybody knows, I’m expecting a baby,” Jhennifer said. “It was kind of a surprise to everyone.  At first it was kind of a problem, but a child is a blessing as I see.”

Bryan struggled with fear when he first heard the news earlier this school year, after he befriended Jhennifer since their freshman year and dated her since their junior year. Others’ reactions did not exactly help either.

“My friends were like ‘Dude, damn. You messed up your life,’ but whatever. Honestly, I don’t even see it as a problem because everything is going to be okay,” Bryan said. “She’s had friends like ‘dude, you should get an abortion. Don’t have a baby now. You’re not going to be ready,’ but she took it and said no I’m ready. I’m happy with the baby.”

Jhennifer and Bryan never saw abortion as an option from their mutual Christan beliefs.

“I grew up with that belief from my parents. So many people try to have a child and don’t have the opportunity to,” Jhennifer said. “Even though it’s not my time to, I got that chance and I got that gift. [I] might as well make the best of it.”

After talking about it, the two decided to get married, and eventually did at the Coral Gables Courthouse on Feb. 3, with a small ceremony and dinner. They talked through and agreed on the decision. Eventually Bryan proposed, with the consent of her parents to marry Jhennifer.

“There was no hesitation,” Bryan said. “I love her. She loves me. Her parents know that. They agree. We did it with love.”

Jhennifer now lives with Bryan. They expect their baby girl, Bella Marie, by June 4, a day before the senior class officially graduates. Jhennifer plans to take online classes through Miami Dade Community College once the baby arrives. They have communicated extensively with both of their parents about how they will provide for their child financially, and Bryan works through On-the-Job Training. With support from counselors, parents and friends, they both have expressed having relative confidence toward the future.

“Bryan’s mom was actually pregnant at 18. She told me how she went to school, she went to prom, all of her senior events, while being pregnant and that people would judge, but she was that type of person that she wouldn’t listen to them,” Jhennifer said. “She still had a group of friends that supported her through everything. She just told me either way, these people have nothing on me. I have to worry about my studies, with my future with my kid, so I shouldn’t let that bother me at all in any sense.”

Bryan looks forward to being a dad.

“Most people don’t really go through this at this age, but with my support, I feel like I’m going to be a great father,” Bryan said.