Clouds of fun at the Palmetto Bay Color Run 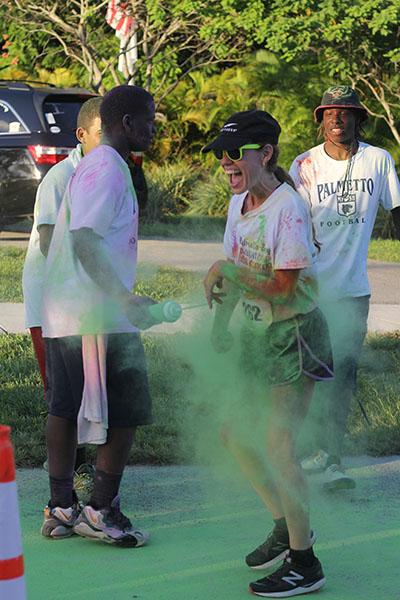 On Saturday, November 7th, the Parent Teacher Student Association (PTSA) hosted the first annual Palmetto Bay Twilight Color Run and Concert. The event kicked off at 3 P.M. as hundreds of students, parents and teachers gathered at the Palmetto Bay Municipal Center. Music and clouds of color greeted participants before they assumed position on the starting line.

“I signed up online in the beginning of October,” junior Rebecca Rousseau said. “It was different [from other runs] because most of the runs I do are early in the morning but this was later so it wasn’t as hot and I’ve never done a run where they pour colors on you.”

Registrants received a free shirt along with a medal handed to them as they crossed the finish line. Sunglasses handed out prior to the race served as eye protection from blankets of color that fogged runners’ visions. Runners also received a packet of color before the run started to use as they pleased.

The course twisted through the Municipal Center, leading runners all around the village park. Police only had to block off one street, unlike many other races where entire neighborhoods close their streets.

“When I was talking with the village about doing it, I insisted with the budget for doing 300 registrations,” PTSA President Anna Hochkammer said. “Our goal for Campaign for Excellence is $15,000 to build a new weight room and I think we’ll make half of that from this event.”

Students from surrounding elementary and middle schools also came to support Palmetto. The Coral Reef Elementary Running Club ran the last mile of the race as their first club event. Although different schools participated, all the proceeds go towards Palmetto.

Over the course, runners encountered different checkpoints with volunteers who held bottles filled with colored powder. As participants passed these volunteers, they found themselves showered in clouds of pink, yellow, orange and green. The football team accounted for most of the volunteers, along with members of Student Council.

“I got there at [noon] to set up. We set up the tents, the tables, and helped with the stations. [My job was to] put paint on the runners,” senior Stanford Ellis said.

After the runners crossed the finish line, scattered food trucks and vendors, including the Crepe Maker and Kona Ice snow cones, offered a variety of refreshments.

The event closed out with a performance by Cutler Stew, a band composed of local fathers who perform across South Florida at venues ranging from Black Point Marina to the Keys.

“I think [the run] was a good way to fundraiser in a community environment for our school,” sophomore Mia D’Orazio said. “The part that I liked the most was it was a community event, not just for Palmetto.”