From Palmetto Panther to a Houston Cougar 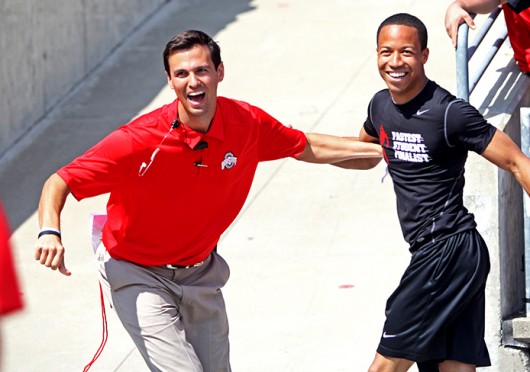 Palmetto alumnus Fernando Lovo has gone through quite the journey to become the Assistant Athletic Director for Football Operations at the University of Houston (UH). After his graduation in 2006, Lovo attended the University of Florida (UF).

During his sophomore year at UF, Lovo began working as a member of the football team’s equipment staff and worked in the operations department. By his senior year, Lovo was part of two national championship winning teams under head coach Urban Meyer at UF. When Meyer was hired by Ohio State University (OSU) in 2011 as head coach, Meyer took Lovo with him. In his third season at OSU, the Buckeyes won the inaugural college football playoff. After the season, OSU offensive coordinator Tom Herman was hired as head coach at UH. Herman offered Lovo the Assistant Athletic Director for Football Operations position, the position he currently holds. In his first season, the Cougars went 12-1 and won the American Athletic Conference Championship.

The Panther spoke with Lovo to discuss his path from Palmetto to the Cougars, and the memories that came along with it.

The Panther: Is there anything different at Houston with Tom Herman than with Urban at Ohio State and Florida?

Lovo: “People always ask how Coach Herman is. I always say Coach Herman runs his program like Urban Meyer. If there is anyone who plans to run their program better than Coach Meyer I would like to meet him. We run our program very close to OSU and Florida. He is truly a players’ coach. He treats everybody like gold. There is not a lot different between the two. We obviously put our own spin on things. If you took a snapshot of our programs it is a testament to Coach Meyer and Coach Herman that they have been able to bring a winning culture to Ohio State and Houston and get the best out of their players.”

TP: Winning a national championship is a pretty big deal, can you describe that moment?

Lovo: “Everyone in their timeline of life always has goals that they set for themselves, when I got involved in sports I wanted to be part of a championship caliber team. If I  had to describe it [winning a national championship]  in one word it makes everything worth it. People think football teams just show up on Saturdays and play the game. What they don’t realize is that so much preparation and hard work goes into it. When you see the clock hit zero and see the confetti come down, it makes everything worth it.”

TP: Did you originally plan to go into a career in college football? If not, what were your original plans in college as far as a career path?

Lovo: “When I first started at UF, I was a political science major. I was pretty set on being involved in politics or a lawyer. Stepping foot on campus in 2006 in Gainesville, I never envisioned being where I’m at right now. At Florida, I was able to take the time to truly discover what I wanted to do with my career. I even took my LSAT and it was a hard choice to choose between law and football. Working at UF with the football team, it opened my eyes to something that I never thought I would consider doing as a career, but I wouldn’t change it for the world.”

TP: Who is the player that enjoyed working alongside with the most and why?

Lovo: “It is so hard to pick just one. I  think back on two players that really had an impact on me, a tight end at Ohio State named Jeff Heuerman drafted by the Denver Broncos, not the most prestigious player rewards wise, but I developed a good relationship with him and we shared a lot of the same beliefs and values. We still stay in touch to this day. And obviously Tim Tebow, I would be remiss if I didn’t say I developed a friendship with one of the greatest college football players of all time. He was a great teammate and a great leader. To see him lead the way he did in those years of college that I worked with him I think back on it and it really inspired me to work harder, to be a leader, and to be a positive role model to people around me. He is one of the best I have ever been around.”

TP: Out of all your destinations, which one has been your favorite and why?

Lovo: “I can say that Houston has probably been my favorite stop. At a place like the University of Houston you have to find a way to make things happen. Coach Herman always jokes that the answer is always yes. At my position when you are presented with situations, you have to say yes. It has helped me with my strength and weaknesses. I’ve really enjoyed my time in these 12 short months and working with Herman has been a complete joy.”

TP: Did you expect to win a national championship at Ohio State so quickly?

Lovo: “The plan in developing a culture, everything around here is about culture. We believe in culture, toughness, love, and accountability in everything we do. The thing about OSU and UH is that we inherited really good players. But we were able to take it to the next level. We were able to change the culture with the 110 guys on the team. When you win close games, the team gets closer and closer and the love for one another grows. We were able to maximize the talent and went on a run that was unprecedented. If we were able to play in a National championship in 2012, I think we would have won.”

TP: What benefits does the current job you hold have compared to other occupations?

Love: “First and foremost just being around a team, the camaraderie, the brotherhood, and love a team has to be around something you feel you have a direct impact on certainly is a benefit.  the love and brotherhood with the young men you develop along with the places you get to see and places you get to be a part of is just a once in a lifetime experience. Sometimes I have to pinch myself to realize how blessed I am to be part of such a unique experience. I don’t take it for granted.”

TP: What is your ultimate goal as far as what positions you would like to hold in the future?

TP: What advice would you give to someone that wants to pursue a similar career path?

Lovo: “I would say that without questions enjoy your time in college, as they will be the best 4 years of your life. You have to work and gain experience while you are in school and showing someone your resume. Especially in athletics, they will ask you what experience you have. I know people that have degrees from prestigious institutions, but do not always have the experience. At the end of the day, experience is the most important thing. I think experience gave me a head start and gave me an advantage against others competing for the same job.”