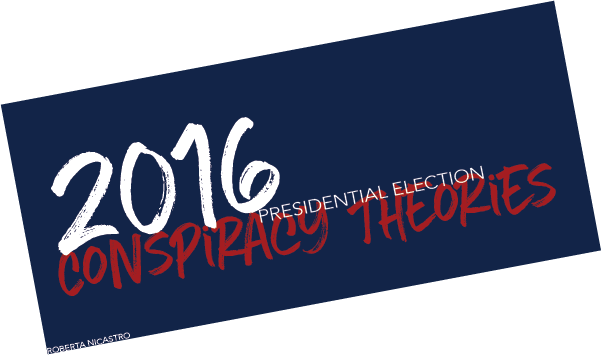 Merriam-Webster defines a conspiracy theory as “a theory that explains an event or situation as the result of a secret plan by usually powerful people or groups.” This year different conspiracy theories trended on Twitter, leading to heated debates among strangers and/or a sudden realization that your entire life is a lie. With the presidential election creeping up on us, conspiracy theories take center stage. Sit back and enjoy the next four conspiracy theories that surround the 2016 election.

One of the most famous conspiracies surrounding the election encompasses how Donald Trump is a plant to destroy any chance of the Republican Party having the presidential seat in the White House. Some political figures pointed out how the Republican nominee donated money to the Clinton Foundation, including governor Jeb Bush who implied in a tweet that Trump negotiated with the Clintons under the table. Although Trump denied these allegations, this conspiracy will continue to linger until the election heat runs its course.

After Trump’s comments about competing in a rigged election surfaced during a mid-October rally, many Americans began agreeing with the business mogul. He believes the Democrat party is culminating in mass voter fraud, rigging the polls with deceptive or inaccurate voting numbers. A study by the Pew Center presented a number of findings, including how 1.8 million people who are registered to vote have passed away and 2.75 million people are registered in more than one state, contributing to voter fraud accusations. Also according to a 2014 study by the University of Chicago, 51 percent of Americans agree or strongly agree that the United States government is corrupt and makes many major decisions  made by an elite minority.

Hillary Clinton indeed suffered from pneumonia in September, but got a doctor’s note saying she was fit to serve as president for the media to see. Aside from the pneumonia, some believe that she has Parkinson’s disease and a body double to fill in for her. In the last couple of weeks, conspiracy theories on tabloids like the National Enquirer and websites like Reddit all came to the conclusion that she does have a body double. Different news sites talked about Clinton fainting during a 9/11 ceremony in California and recovering 90 minutes later, looking  rejuvenated as if she never had been sick a day in her life. Many researchers have tried to prove that she has a body double, so much so that they have been examining her fingers, her chin and her earrings. On Twitter, the hashtag #ClintonBodyDouble was trending throughout the day and those who participated in the trend started comparing photos from 2001 to 2016 showing their evidence of the body double.