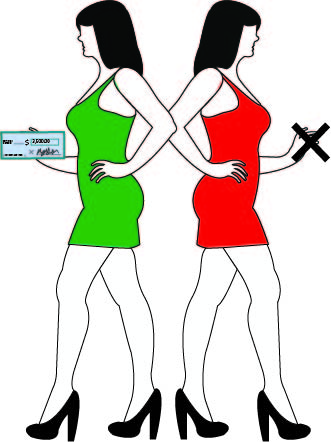 Day 3: Should prostitution be legalized

Sex work is work. Sex work entails the selling of a sexual service for money, whether the service be phone sex, pornography or prostitution. Despite the severe stigma around it, prostitution is simply the provision of a service, like fixing a car, bagging groceries or picking farm-grown food. Our society’s outdated views on certain subjects prevent  people from seeing that prostitutes are not all victims of sex trafficking or immoral women. Sex trafficking is a serious issue that has flourished due to the constant demand for prostitution, but also its illicit nature.

Prostitution is not in and of itself harmful to the women who perform sexual acts; rather it is the hostile and abusive environment and treatment of the prostitutes, which is able to continue because prostitution is not a legal–and thus not protected–profession. Practicing safe sex with various clients brings no harm to a woman, but when she is forced or coerced intro prostitution, abused physically as well as sexually and practicing unsafe sex, she is a victim and a sex slave rather than a simple prostitute.

Many argue this is the reason why prostitution should remain illegal, but it is actually the reason it should be legalized. Once something is legalized, it can be regulated. The government can ensure that pimps and madams are not mistreating their workers, workers can form unions, police can protect prostitutes from clients who turn violent or become stalkers; underaged workers will become a smaller fraction of the workforce. In 2003, New Zealand decriminalized prostitution, and soon found little to no evidence of sex trafficking.

As it is, prostitutes work unprotected. Their jobs rely on flying under the radar, so when issues arise where they may need law enforcement, they risk arrest. Legalization would ensure that women who seek to exit or escape prostitution would have better luck finding jobs because their record would not contain prostitution or solicitation charges. It would also ensure that the majority of demand would be funneled away from trafficked individuals and into legal brothels. The millions of dollars in revenue that followed the legalization of marijuana show that demand will follow the legalization process. After all, it is much easier to run a business when the owner is not constantly worrying about law enforcement.

Though sex trafficking is an issue that needs addressing, it is not the only form of trafficking. Laborers are also trafficked, as are maids and other domestic servants. Slavery is alive and well in 2017, and sex slaves are not the only victims. The fact of the matter is vulnerable people are trafficked all the time, and not just for sex. Worldwide, 52.6 men and women are forced into domestic servitude, along with 7.4 million children younger than 15. Does this mean we need to make domestic work illegal? No, it simply means we need to increase regulation in order to protect these people, which is easier to do when it is legal. The same goes for prostitution. People often say no one should have to sell their body. No one should be forced into selling their body, but they should have the option if they please, and be protected from abuses if they do not please.

According to the Oxford Dictionary, prostitution is the practice of engaging in sexual activity with someone for payment. Prostitution is illegal for a reason, the dangers of prostitution are numerous and can be deadly. It promotes an unhealthy and uncertain lifestyle where prostitutes can unknowingly acquire an STD from a client and pass it along to family members, and other clients.

An article by the CDC says the risk among those who exchange sexual acts for money is incredibly high. Prostitution does not guarantee a set payday either, sex acts may vary in price depending on the prostitute’s preferences.

Prostitution is an immoral practice that sd within the U.S. government. The human body is not an object and should not be priced and sold as one. Sexual abuse is extremely common within prostitution even though they are selling sex.

Within the heat of the moment and a prostitute’s unwillingness to perform a sexual act, clients can become violent, resulting in mounting tensions that could result in harassment and abuse, leaving the prostitute traumatized both mentally and physically. Women who are victims of sex trafficking can be forced into prostitution and a lifestyle that may strip them of their morals and self respect.