The English singer-songwriter David Bowie passed away last night after a very private 18-month battle with cancer. A post on his facebook page said that he did so peacefully and with family.

As a chimera of different mediums of art, David Bowie rose to prominence in 1969 with the release of his single Space Oddity. After a long career of music, painting and acting, his 25th studio album Blackstar, which released earlier this month, marked his final work. 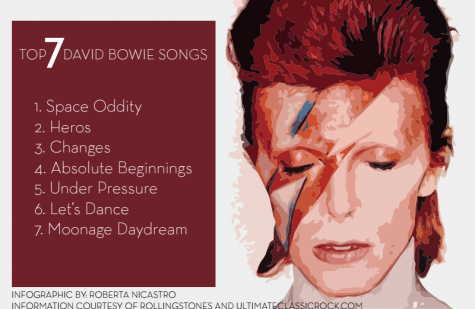 The rock star was inducted into the Rock and Roll Hall of Fame in 1996 and sold over 135 million albums worldwide.

Bowie not only dabbled with music – he could play 14 instruments – but he also experimented with art, acting and fashion. He dabbled in paintings, sculptures, collaborations and photography, many of which defied boundaries of realism and delved into abstract and expressionistic techniques, not dissimilar to his endeavors in his other artistic mediums.

His sense of fashion which explored themes of multiculturalism influenced similar avant-garde fashion personalities in the music industry such as Madonna and Lady Gaga. Much like his music which changed in an effort to remain contemporary, his clothing style not only created an androgynous persona but also represented various cultures ranging from German expressionism to traditional Japanese clothing.

In his four-decade career, David Bowie also made appearances on the silver screen. From The Man Who Fell to Earth to Labyrinth, his acting career lasted almost as long as his music career.

In recent decades this musical innovator lost popularity. Though his final album which released on his birthday two days ago, Blackstar, received solid reviews, his presence in the public consciousness fell behind. A look at Google Trends shows that very few people searched for him on the popular search engine until this month, presumably due to his passing.

David Bowie is survived by his wife, son and daughter.