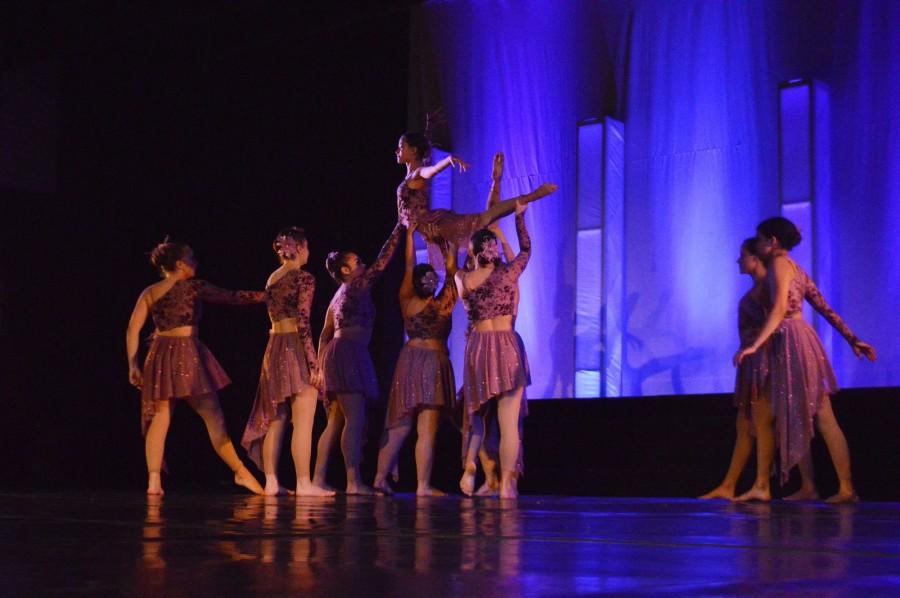 Dancing beyond the limelight

Lights, camera, action: a phrase typically reserved for Hollywood film sets is now applied to the performers who stunned audiences at the Memories and New Beginnings dance show April 27 and 28. Dozens of Palmetto’s dancers, ranging from novices to college-bound masters of dance, captivated audiences with all the grace of swans for their final performance of the year directed by dance instructor Rosanna Karpiak.

Faces radiated beneath the lights, makeup and variety of tailored costumes as the performers swept the audience with fluid moves, not simply entrancing viewers with their elegance, but personifying the lyrics of each number into stories told with their bodies alone.

Karpiak drew inspiration for each number from her own career as a dancer and dance instructor, making a sentimental tribute to her students and her work as her last hoorah at Palmetto. Soundtracks “I Wish,” “On Broadway,” “Vogue,” “Like a Prayer”and a Missy Elliott mashup were among the variety of songs accompanying the choreography, all with due tribute to the woman who inspires these students.

“I love Ms. Karpiak. She’s the best teacher ever, and she’s always been a role model for me, so it’s great to be a part of her last show,” sophomore Donna Trana said.

Her students admire her passionate teaching and appreciate how she helped them become more comfortable in their own skin. Bustling with heat and adrenaline in the minutes immediately following their bows, seniors Eboni Gabble and Rebecca Warren enjoyed the rush of changing out of costumes for the last time with Karpiak at Palmetto.

“She made us come out of our shell,” Warren said.

Though the future holds questions as to who will take over the dance program in subsequent years, Karpiak’s students remain optimistic and focus on the impact she has already made on them.

“This is very important [for me] because I won’t be able to see her that much more,” sophomore dancer Robert Ball said. “It’s the end of the year, and I want to do more with her, but I guess whoever we get next year is going to have to take over.”

Sentimental family members and friends in the audience were forced to face the reality of the senior performers moving on to a new chapter in their lives.

“I’ve been looking forward to this show all year,” senior Variations dancer Andrea Guevara said. “From the opening of the curtains, my mind was racing just thinking about how fast my journey on Variations had gone by. Words can’t even begin to describe how odd it feels knowing that I won’t ever choreograph, have another after school rehearsal or performance with these girls.”

Escorted down the auditorium aisle, flanked on each side by a parent, they walked out in flowing white dresses and teary eyes to perform a heartfelt number choreographed as a symbolic farewell to high school.

“Every year, I’ve watched the seniors walk down the aisle with their grad caps and every year I convince myself that I’m nowhere near graduation,” Guevara said. “When it was my turn to walk down the aisle, the truth of the fact hit me. I, alongside the five other seniors, was finally graduating.”

Beneath the rehearsals, performances and dazzling costumes lies a close-knit family of dancers.

“Most of the seniors on Variations I’ve known since kindergarten, and sharing my final dance with them on stage was a heartwarming and memorable experience,” Guevara said.