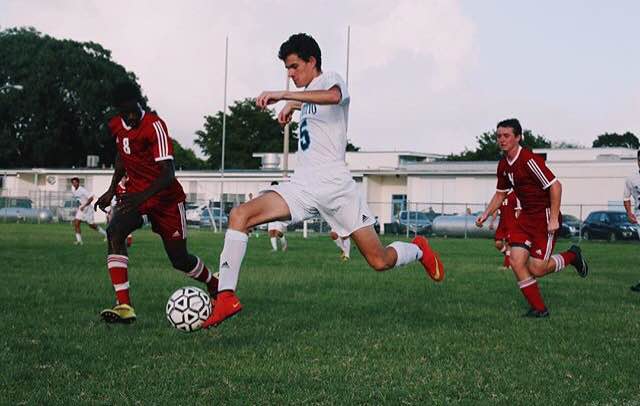 Learning to play soccer at age three, sophomore Palmetto starting CDM (Center Defensive Midfielder) Nicolas Diaz envisioned playing for his country at a young age. His introduction to the sport at that age was due to the fact that his dad began playing at 18, and he wanted to give his son a chance to excel on the field with a set foundation.

Growing up in Chile, Nicolas’s friends loved to play soccer, yet he didn’t think much of the sport until he was about 8 years old.

“I wasn’t into the game as much as my other friends in school, when we would play I would walk around and make jokes or talk, and I never took it serious,” Nicolas Diaz said. “It was when I was eight before I left Chile to move to Miami. The thing that influenced me the most to play soccer was watching the Chile National team play This made me want to be the guy inside that field.”

Diaz joined his first soccer team in Miami after moving from Chile at age eight, in the Pinecrest Premier League. In order to train for soccer besides attending daily practices, Diaz began to run regularly, a training method that he still uses to his benefit.

“I run for as long as I can take, and sometimes I do fartlek running, which is a sprint for three minutes as fast as I can, and then a jog for three minutes,” Diaz said. “This helps me improve my speed and endurance.”

The hard work payed off this past summer, when Diaz was selected to play on Real Madrid’s Generation Adidas Select Program. In order to receive an invitation to the camp run by the storied franchise, Diaz’s coach from the Pinecrest Premier League emailed the scouts, convincing them of Diaz’s worth. As a result, scouts from Madrid were sent to watch Diaz display his talents on the field. The scouts valued Diaz’s game, and eventually successfully recruited him.

At Palmetto, Nico is the only sophomore starter on a team with 17 upperclassmen and the Panthers are first place in 5A District 16, a division often regarded as the most competitive in the county.

Hermann Amador, Palmetto’s soccer coach, praised Diaz’s maturity as a sophomore and the work ethic that hones his talents.

“He is a young, up and coming talent, and he is in tenth grade, and he is playing at the varsity level,” Amador said. “He’s helped us immensely, being one of the best defensive players that we have on the team currently. I think he can improve if he put less pressure on himself.”

For the Panthers to win the district and beyond, Diaz believes that the team needs to win battles in every facet of the game, not only strength and conditioning.

As for his top goal, starting for the Chilean national team, Diaz gives it thought every day and has goals that will gradually lead to his ultimate dream.

“I would like to play professional for Chile because it is the sport I love and to represent my country in soccer is the best feeling in the world,” Diaz said. “I can achieve this goal by working hard, giving one hundred percent in everything and by playing college ball, and by trying out for pro teams afterward.”