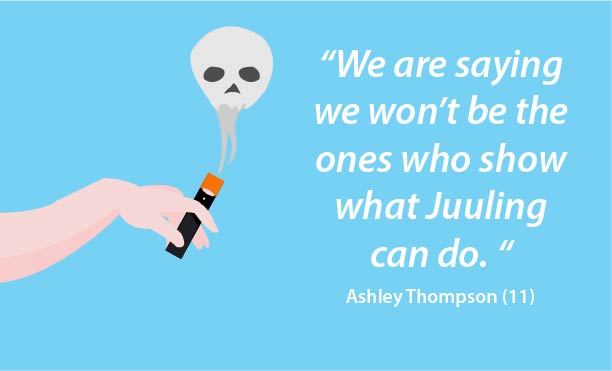 On Nov. 13, Juul Labs announced their decision to retract and ban the majority of flavored pods from retail stores in an effort to curb current underage use.

The creation of the Juul in 2015 came as a supposedly healthier alternative to smoking, as well as a method of quitting unhealthy smoking habits. However, the minimalist, discreet design as well as the inexpensive, liquid pods available made it accessible to underage users. These include users under the age of 18 or 21, depending on the area. According to the New York Times and an unpublished government study, more than three million middle and high school students reported using e-cigarettes. One third of these students agreed that their variety of flavors remain an important factor in the appeal of juuling.

According to the Martin Health System, Juul pods contain as much nicotine as one pack of cigarettes, and include glycerol, benzoic acid, and flavorings. Juul Labs sell multiple flavors, such as creme, cucumber and mango, to name a few. Despite the new ban, menthol, mint and tobacco flavored pods will remain in stores to maintain sales.

The popular e-cigarette company received  backlash from the Food and Drug Administration when it initially launched. Most recently, they planned to release the same significant statement–as well as new age verification measures– but Juul Labs beat them to it.

The rift between Juul Labs and the FDA did not begin out of nowhere. On Sep. 12, an FDA announcement informed e-cigarette manufacturers that they must devise a plan to restrain the prevalent underage use within 60 days.  That two month deadline passed just as Juul Labs announced their new countermeasures.

Juul Lab’s efforts to remedy the massive underage popularity of their product goes beyond just retracting certain flavors of pods. With the ability to buy online, ensuring legal purchases proves difficult, but the company plans to add a photo requirement in the near future. Additionally, they intend to prevent bulk purchases by allowing only a certain number of yearly transactions of the e-cigarettes and pods. Outside of internal Juul Labs and FDA regulation, the fight against underage use continues even here at Miami Palmetto Senior High.

“The Florida Department of Health has a section that works for Tobacco Free Florida, and they also have a youth advocacy board to connect with young people and it’s a part of Students Working Against Tobacco [S.W.A.T.]. This year is actually [S.W.A.T.’s] 20th anniversary,” S.W.A.T. vice president, Youth Advocacy Board member and junior Ashley Thompson said.

The organization falls under the Model United Nations club, and just completed their newest initiative.

“[Tobacco Free Florida] initiated national tobacco observance days, and want to implement this new one called ‘#IAmNotaLabRat’,” Thompson said. “This basically is talking to Big Tobacco, the main tobacco industry advertiser, saying we will not be your testing animals. Since Juuling is not new, no one knows the effects yet; it only started in 2015.”

S.W.A.T created pledge cards, an informational video and a poster for students to sign to display their support in this event and to send to Big Tobacco.

“We are saying we won’t be the ones who show what Juuling can do,” Thompson said.