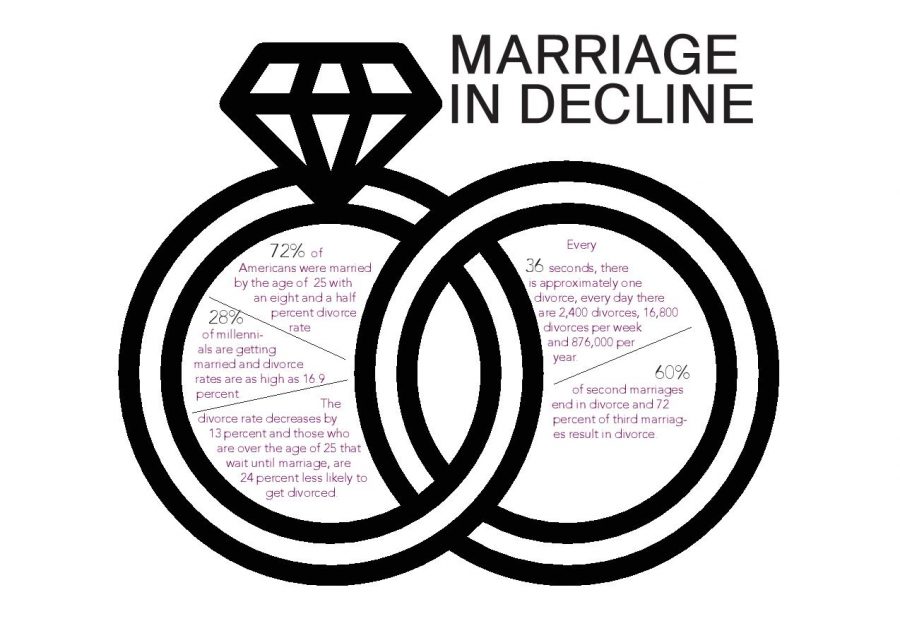 In 1960, 72 percent of Americans were wed by the age of 25 with an eight and a half percent divorce rate. Today, only 28 percent of millennials reach married status by this age, with divorce rates as high as 16.9 percent. Fifteen times the number of unmarried couples today live together than in the 1960s and 24 percent of unmarried Americans believe that marriage is becoming obsolete, according to a research done by the Pew Research Center. Essentially, the amount of marriages in the United States is declining at a slow but steady rate, just like the idea of living in a house with a white-picket fence and one significant other.

“Our generation is becoming more disposable like, taking what we want and need when we need it, and that sort of plays a role in the temporariness of relationships,” junior Chenoa Nussenberg said. “Back then, you would ask the dad to have their daughter’s hand in marriage but now it’s like you just make an online profile and find someone.”

Marriage rates vary between different age groups, education levels, genders and races. There was a steep decline in marriage rates between 2008 and 2015 for young women with a lower education compared to women with college degrees, whose marriage rate grew from 30 to 36 percent.

“With a higher level of education, you are definitely more prepared to provide for your family, eliminating possibly one of the leading causes of divorces, financial issues,” freshman Logan Spiegelman said.

Although people get married at various ages, there are specific trends for certain demographic groups; more than a third of African Americans older than 25 have never tied the knot and the unmarried rate for white people and Latinos doubled. According to the United States Census Bureau, from the Survey of Income and Program Participation (SIPP) some age and race groups had a lower marriage rate percentage in 2009 than in 1986. Some groups though, such as the 55 and older crowd who had a higher percentage of married people in 2009 than in 1986.

Every 36 seconds, there is approximately one divorce; every day there are 2,400 divorces, 16,800 divorces per week and 876,000 per year. Fifty percent of marriages end in divorce, however most do not know that there is a higher risk of divorce in the second or third marriage. 60 percent of second marriages end in divorce and 72 percent of third marriages result in divorce. Just like the marriage rates for the different age groups, races and education levels, there are different divorce statistics for every group. If someone were to attend college, the divorce rate decreases by 13 percent and those who are over the age of 25 that wait until marriage, are 24 percent less likely to get divorced.

Millennials have an immense role in the marriage decline, showing that most are getting married at 27 for females and 29 for males, compared to the 1960s when women were tying the knot at 20 and men at 23. A recent Urban Institute report stated that millennials will remain unmarried well through their 40s and the rate of people getting married might drop down to 70 percent.

Simultaneously, Pew Research Center also estimated that about 25 percent of millennials will never get married.

“Marriage is a huge commitment and no one’s ever prepared. Why write on a paper claiming you’re in love?” junior Adrian Junco said. “Taking the risk of having to go through a divorce is a complete waste of money and is just not worth the time.”