Amending the treatment of the terminally ill

A recent amendment proposed in Florida’s state legislature would allow the use of medical marijuana among terminally-ill patients with less than one year to live. The amendment passed the Fiscal Committee Policy unanimously by an 8-0 vote and will now open for voting in the senate.

A similar amendment was proposed in 2014 (Amendment 2) that would allow the use of a non-euphoric strain (not eliciting intense excitement or happiness) of marijuana to treat disorders and diseases including epilepsy, cancer and ALS. Amendment 2, however, came up short as 58 percent of voters approved the amendment, only needing 60 percent to pass. 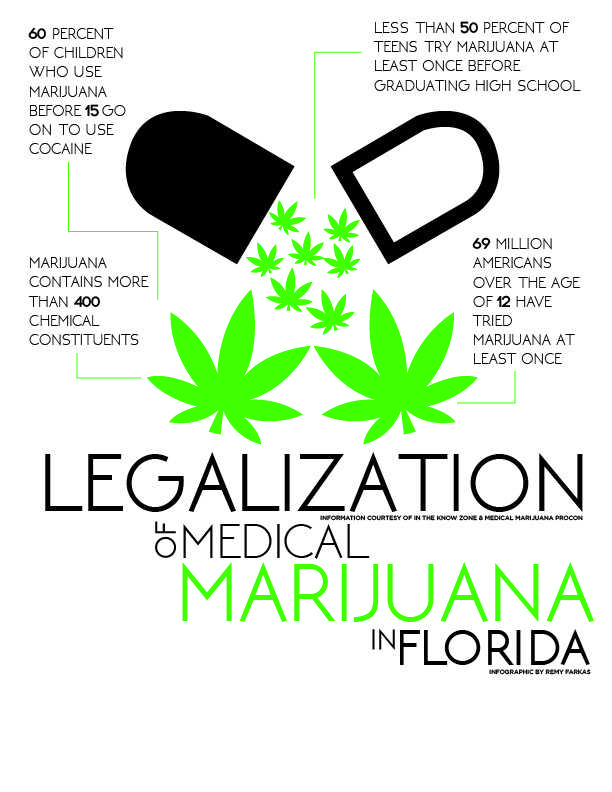 “There are other medication that ill patients can take to alleviate the pain,” United States History teacher Leandro Ramos said. “Marijuana isn’t the only drug that can treat disorders. If the amendment passes, people may claim they have an illness just to be eligible to receive pot.”

John Morgan, a personal injury lawyer from central Florida, has put more than $5 million toward the effort to legalize medical marijuana. Morgan has tallied up more than 690,000 signatures from voters, well over the amount needed to get the amendment on the ballot for November 2016.

If medical marijuana is legalized in Florida, the state would become the 23rd state to legalize it. If the amendment passes in the senate, patients will be able to visit their doctor and see if they are eligible for a medical marijuana card. Patients can then go to state-approved dispensaries to purchase medical marijuana from five authorized distributors.

“I know a former teacher of mine that had a relative dying of a terminal disease and used medical marijuana to regain minimal amounts of strength in his final days,” junior Charles Noguera said. “Stories like this are proof of the effectiveness of medical marijuana, and should be used as a basis for legislation.”

As there are currently more than 250,000 terminally ill patients within the state of Florida (the majority over the age of 60), passing this amendment could also help the state financially. By 2020, it is estimated that the medical marijuana market in Florida will be worth well over one billion dollars.

In 2015, the state of Colorado collected over 70 million dollars in cannabis taxes, nearly doubling its revenue collected from alcohol taxes. The population of Florida is nearly four times that of Colorado, which means that the possible full legalization of marijuana in the state can hike tax revenues to over $280 million, and most of it would be reinvested in the state’s economy.