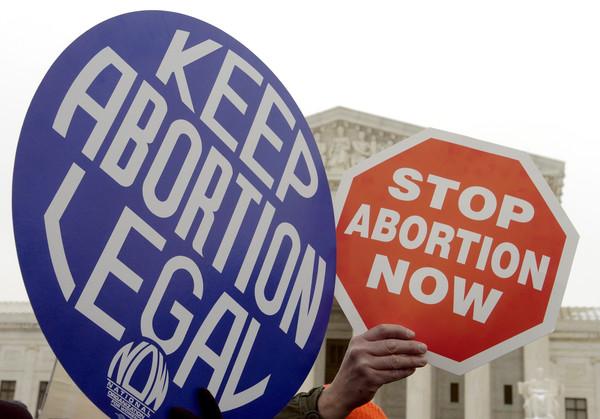 Photo courtesy of The Michigan Review

A recent history and outlook on future Abortion laws

Since Roe versus Wade passed in 1973, there exists groups and legislators who attempt to dismantle it. Recently, nine states introduced measures to ban all or most abortions with only two making it to their governor’s desk, in Oklahoma and Ohio. In 2016, more than 60 restrictions to access abortion were passed by 19 states according to the year-end report from the Center of Reproductive Rights.

“Most of these people do it because of religious stuff and if they believe it’s wrong and they don’t want to have an abortion, that’s fine,” senior Sophia Pinto said. “But they shouldn’t impose their beliefs on other women.”

The 1973 court case ruled that even after fetal-viability (the ability for a fetus to survive on its own), the states could not prohibit abortions necessary to the physical or mental health of the woman, and that only the physician can define what constitutes health or when a fetus is viable. Although the majority of states regulate abortions in later-term, numerous legislations have been struck down.

Anti-abortion groups seemed emboldened by the election of Donald Trump and the current prolife administration. In a bill passed by Ohio Congress, an abortion ban would take effect as soon as the fetal heartbeat could be heard, as soon as six weeks, which is before most women are even aware they are pregnant.

“I support it,” junior Ethan Burch said. “It’s a step in the right direction for the republic after eight years of having the most pro-abortion president in the history of the country in office.”

Ohio Governor John Kasich vetoed the bill and passed another ban for abortion at 20 weeks, way before the usual fetal viability. Ohio is the 15th state to enforce the ban.

Texas Republicans have filed several bills to require fetal remains to be cremated or buried, whether from a miscarriage or an abortion, which a federal judge blocked.

“In the end, there could be more practical uses for the aborted,” Burch said. “Perhaps scientific ones.”

Earlier this year another Texas law, Whole Woman’s Health versus  Hellerstedt was struck down by the Supreme Court. In the majority opinion, Justice Stephen Breyer wrote that the law does not benefit women’s health and increases obstacles for women seeking abortion.

“[Planned Parenthood is] awesome,” Pinto said. “There’s a misconception that it just provides abortion. It also provides multiple means of birth control and can really just help a lot of people.”

Pro-choice advocacy groups such as Planned Parenthood and Naral Pro-Choice America are urging vigilance for the current presidential administration, while pro-life organizations, such as the Susan B. Anthony group are glad that President Trump is taking anti-abortion measures. Vice President Pence said he cannot wait until Roe versus Wade is overturned.

“If you’re against [the overturning of Roe vs. Wade] maybe they would be more encouraged to use protection, birth control or abstain from sex,” senior Savannah Hodges said.

During his first week of presidency Donald Trump launched an executive order which reinstated the “Global Gag Rule” which makes it illegal for any overseas organization using U.S. aid to have anything to do with abortion. More anti-abortion policies are expected to come.

“I would tell [the Trump Administration] to really remember the word choice here and what kind of country we live in, this is a country of choice,” Pinto said.