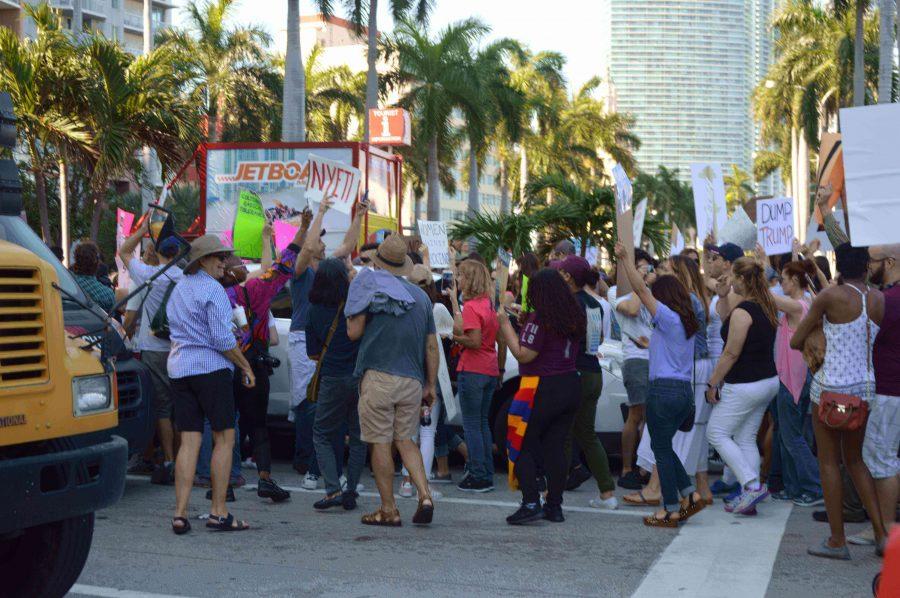 A recap of Miami’s Women’s March

On Saturday, Jan. 21, marches took place in all seven continents in protest of President Donald Trump’s election. Major cities such as Paris, London, Los Angeles, New York City and Washington D.C. with thousands of chanting protesters holding signs and calling for unity. The Miami Women’s March, which took place at Bayfront Park, parallel to the ones occurring across the globe, saw roughly 25,000 attendees.

The streets filled with signs that read phrases from “A Woman’s Place is in the Resistance” to “Don’t Take Away My ACA” and “Dump the Electoral College.” Drivers honked in support and annoyance as the marchers passed, with some even holding signs out of their car.

Lining the sidewalk where the march began were members of the Bible Baptist Church in Hialeah, handing out flyers and telling marchers they were in the wrong fight and should turn to Jesus. Tensions rose as one marcher claimed she was Christian and stated that it could not be assumed that the marchers were not in the correct fight.

Kimberly Moreira attended the march with other mothers and daughters.

From far, the line to enter the amphitheater appeared as a multicolored, winding snake. Upon closer inspection, it was easily seen as thousands of people promoting signs that touched upon controversial subjects that had affected them, donning shirts with political messages and waiting expectantly to enter the Bayfront Park amphitheater. The fire marshall ordered the closing of the entrance as even more people attempted to get in; the space reached capacity yet the line to enter seemed not to have dissipated.

The crowd outside the amphitheater took it upon themselves to continue the march. The protesters marched across Downtown Miami, passing various religious demonstrators.

Inside the amphitheater, there was a slew of speakers, food trucks and various civil rights booths such as the American Civil Liberties Union, Planned Parenthood and more. The venue reached capacity of over 8,000 people as many crowded around the stage and grass waiting for the next speaker.

The speakers represented doctors, congressmen and activists from countless organizations. The speeches varied in themes stretching from healthcare to Black Lives Matter to Stop Parenting Alone, an organization that focuses on helping parents make good choices for their children whose founder, Lina Acosta Sandaal, spoke.

Of these speakers was Lyneise Rachelle of the I Am Simply Beautiful Movement that promotes body positivity across all demographics. All 27 speakers were introduced by Tracy Wilson Mourning of Honey Shine Mentoring program, an organization that mentors young girls.

”I’m here because I have a voice and something to say and we have to stand up and be heard,” Mourning said. “With so much going on in our world and our country, we have to a part of what’s happening.”