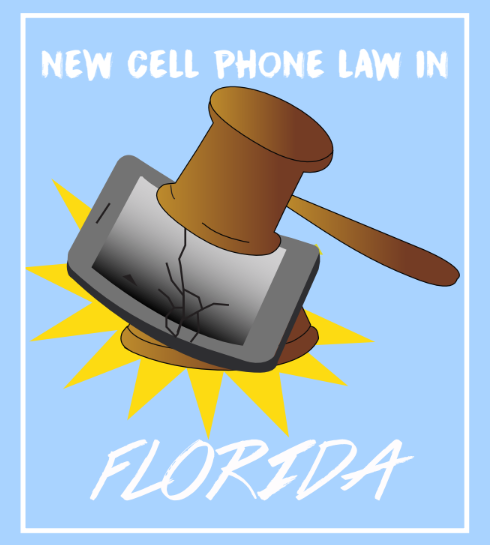 As of Oct. 1, Florida put into effect a new driving law. This new law targets those who use their cellular devices while driving. According to CBS Miami, officers now have the ability to pull over drivers using hand-held cellular devices in school zones, construction zones and active work zone areas.

Though the law has already gone into effect, warnings will be issued until Jan.1, 2020. After Jan. 1, however, the consequences increase in severity — drivers who use their phones while driving face a moving violation charge that includes a $60 fine as well as three points on their driver’s license — suspension of license occurs once a driver receives 12 or more points in a 12-month period.

“It’s like everybody does it and it’s not something that even good drivers don’t do it. Everybody seems to do it, whether or not there is a law in place,” junior and newly-licensed driver Alexis Graesser said.

Florida has faced the prevalent issue of distracted driving for awhile now. According to the Sun Sentinel, in 2017, Florida was the second-worst state for distracted driving, topped only by Louisiana. Floridians, even with laws in place, still feel the urge to look at their cellphones, whether they are at a stop light waiting for the light to turn green or they received a notification . The seemingly quick and careless action can result in dangerous consequences, but even with laws in place, drivers still seem to use their phones when they get the chance.

“I have [heard of this law] from my mom and my dad, but other than that, I haven’t seen a lot of stuff, I don’t know, on social media, on the news,” Graesser said.

Despite the importance of the law and the amount of Floridians it affects, it seems as if there was little media attention announcing the law had become effective. According to Florida Today, violating the hand-held phone ban is a primary offense — an offense that allows a law enforcement officer to pull over a vehicle and give the driver a ticket. This law evolved from the texting and driving law put in place in Florida on July 1, 2019. Now, with the creation of this new law, Florida has the opportunity to determine whether more action is needed or if this penalty suffices. So while out driving, put your cell phones down, turn on do not disturb and keep your eyes where they should be the whole time — on the road.