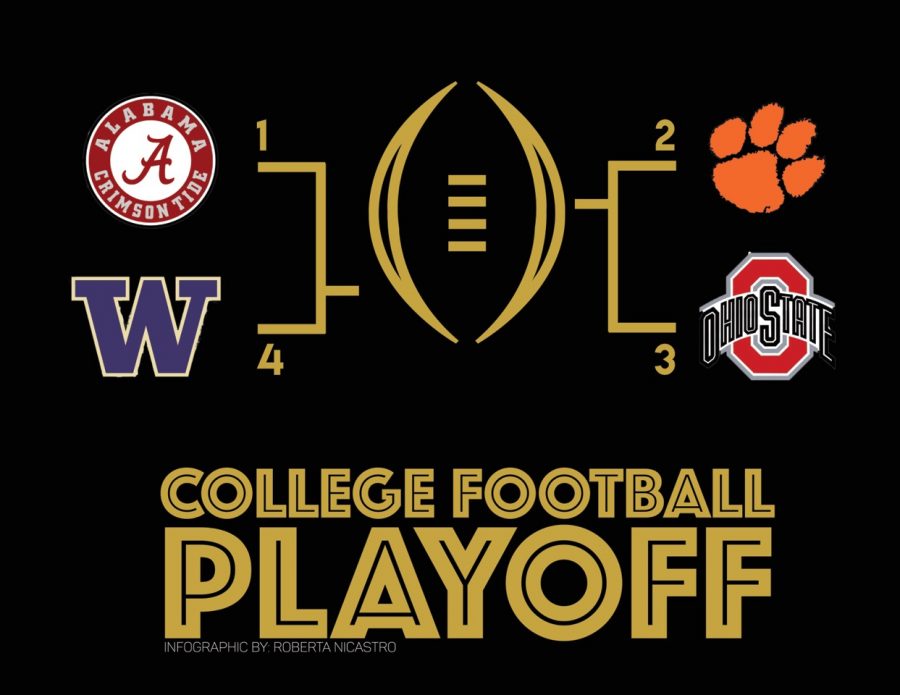 For many of us sports fanatics, the most wonderful time of the year represents a glorious abundance of college football, with a seemingly unlimited number of bowl games and endless hype over the anticipated championship game in early January. But for others who perhaps do not enjoy the prospect of watching a four-hour showdown on screen or in the stands, allow this guide to help answer all of those questions regarding the two-year-old playoff system and a simplified overview of the teams who made it to the top of the pigskin pyramid.

“Playoffs?! Don’t talk about playoffs! Are you kidding me?” -Jim Mora

Ah, yes, perhaps the most famous quote ever screamed at a football press conference, when previous Indianapolis Colts head coach Jim Mora excitedly brushed aside reporters’ questions about the playoffs. Granted, that was the NFL, which has had a playoff system leading to the Super Bowl for decades now. The College Football Playoffs, however, are only celebrating their second birthday – and still facing much criticism from fans and coaches.

Beginning in 2011, commissioners and presidents within the NCAA’s Division I schools began to plan the murder – I’m sorry, the demise – of the BCS Championship, which allowed one lucky-duck coach to kiss and raise the crystal football trophy like Simba in “The Lion King” every year. In 2013, those same commissioners buried the BCS Championship for good, only to give birth to a new and improved road to the championship: the College Football Playoffs (CFP), complete with a new trophy and thoroughly annoying Dr. Pepper advocate. The difference lied in the way teams were chosen, and for years fans and coaches cried out for a new playoff system to replace the old one in order to reduce bias (ha-ha) and make it more difficult for the top two teams to prove themselves for the big game. With the BCS, the top two teams in the nation (according to the AP Poll, and there are several others) automatically qualified for the championship game, but with CFP, the top four teams in the nation – chosen by a selection committee comprised of ex-coaches, athletic directors, and (this is true) Condoleezza Rice – go to the playoffs to compete for the two championship game slots.

Now, this system, though highly anticipated, is still attacked by critics for its few flaws. For one, it does not eliminate bias whatsoever; the selection committee chooses the four teams based on various factors such as strength of schedule (how difficult their games were) and record (how many games they won and lost during the regular season). That leaves an open door for sports show hosts and analysts to preach their opinions on air about why so-and-so should have made it in the playoffs instead of so-and-so. But, hey, it’s a playoff system.

There are also a greedy few who find the current four-slot system a bit frugal. These folks argue for an eight-team playoff system similar to, for example, how college basketball dwindles down to 32 teams, then to the sweet 16, the elite eight and the final four. Why expand? Simply to allow more opportunity for the top teams to make it to the championship. Some analysts have argued that choosing the top four teams leaves out number five, who just missed the cusp and could easily compete for a championship spot. Before they know it, critics will accuse the committee of leaving out number nine and number 17 and so forth.

That’s just how the gears work to produce the two best qualified teams to compete for the national title – now for this year’s lineup.

For those who have lagged behind the news, this year’s top four teams include – in order – the Alabama Crimson Tide, Clemson Tigers, Ohio State Buckeyes and Washington Huskies. The Huskies rose up and surprised the college football world from the start, becoming a nationally acclaimed team in a single season. Impressive. Of course, with that decision came an uproar from disappointed Penn State and Michigan fans, who fell short at five and six on the CFP Poll, which the committee finally released on Dec. 4.

To provide a brief and extremely simplified overview of the top four – and why they made it to the playoffs – these teams proved they could overcome some of the toughest teams with some of the most rigorous schedules. As for Alabama, well, they have pretty much reigned as the number one team by far the entire season; a lot of analysts actually think they already won the championship in a hands-down victory over everyone else due to their perfect season and dominating character. Falling not too far behind them is Clemson, who arguably made their way to the top through a bumpy season. Some of their games they just barely won, and towards the beginning of the season seemed a little sloppy on the field. Their winning record of 12-1, however, won them the spot. Ohio State – who some believe deserve the number two spot – finished the season with a 11-1 record, showing the same level of dominance as the previous two. Then the committee selected the ugly duckling, the underdog, the Washington Huskies to fill that fourth and final slot for the playoffs. With an impressive 12-1 record, they beat out all of their Pac-12 Conference opponents except for the Southern California Trojans, ranked number nine. Penn State and Michigan are still pouting over that spot.

What are all these bowls about, anyway?

This time of year brings with it the holidays, a new year, and dozens of bowl games, but fret not. The only two relevant to the championship game itself are the Chik-fil-A Peach Bowl at the Georgia Dome in Atlanta, where Alabama and Washington will kick off at 3 p.m. on New Year’s Eve, and the Playstation Fiesta Bowl at the University of Phoenix Stadium in Glendale, Arizona, where Clemson and Ohio State will kick off at 7 p.m. the same day.

As for the rest of the bowl games, which began on Dec. 17 and will continue through Jan. 2, the rest of the Division I teams with winning schedules were selected to play in matchups they normally would not see in a regular season, like the University of Miami’s win over the number 16 seed West Virginia in the Russell Athletic Bowl in Orlando on Dec. 28. Since the rest of the nation’s teams are not competing for a championship title, bowl games serve as a celebratory hoorah for fans and the seniors on the team, many of whom will never play another football game again unless the NFL picks them up in May around Draft time.

With all this in mind, you can now confidently gather your friends around the television this New Year’s Eve and watch some college football before welcoming in 2017.