Was America Ready for Pete Buttigieg? 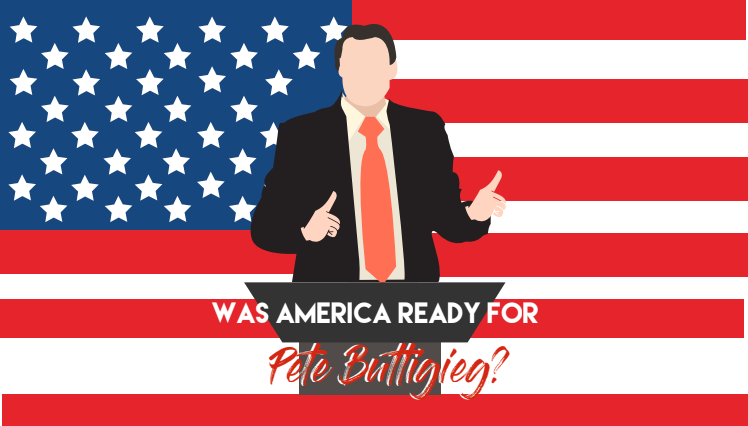 In April of 2019, the mayor of South Bend, Indiana — Pete Buttigieg — joined the race to become the Democratic nominee for president. This made him the first openly gay candidate to run for the presidency. However, he did not allow his homosexuality define him. A Harvard graduate, National Merit Scholar and veteran formerly stationed at an air base Afghanistan, “Mayor Pete” proved himself the most well-rounded candidate on the Democratic stage. As a young politically involved activist about to turn 18, I could not contain my excitement at seeing a candidate that refused to let others define him, with strong and well-thought-out policies to match.

He spoke with great confidence and reassurance that filled me with a hope that I have not felt in a candidate since Barack Obama. With moderate yet socially liberal policies, Buttigieg showed that he believes in equality for every single person. While he only held the position of mayor as opposed to his competitors, who tended to be senators, he remained well-versed in public and international policy, foriegn affairs and the interest of the common person.

Married to a public school teacher, he strongly supported public education and better benefits and support for teachers. As a member of the LGBTQ community himself, he understood the feeling of being different and unaccepted. At a political rally in Denver, a young boy asked him to help him come out. Without skipping a beat, Buttigieg told the boy that it would not be easy, but people like himself and his husband, Chasten Buttigieg, would stand behind the boy  throughout their lifetimes.

Despite all his accomplishments and reasonable policy, America did not show enough interest in Buttigieg as their Democratic nominee. There even emerged a group, Gays Against Pete, that claimed Buttigieg was “not gay enough.” What does this even mean? This is a prime example of a community that needs to support each other, but instead tears each other down through  internal homophobia.

After winning the Iowa caucuses and coming in top three in the New Hampshire caucuses, Buttigieg reevaluated his likelihood of becoming the next Democratic nominee. Instead of  continuing in the divisive race, Buttigieg ended his campaign on the evening of Mar. 1. Once again proving his kindness and logic, Buttigieg ended his campaign and endorsed Joe Biden on the basis of uniting the party and beating Donald Trump.

As a first-time voter myself, I had looked forward to casting my first ballot for Buttigieg. I am ready to have a president that stands for everyone, does not fear talking about mental health and who thinks rationally and selflessly. However, America as a whole was not yet ready for Mayor Pete to become President Pete. At only 38 years old, it is abundantly clear that Pete has his whole political career ahead of him, and this will not be the last we hear of Pete Buttigieg.