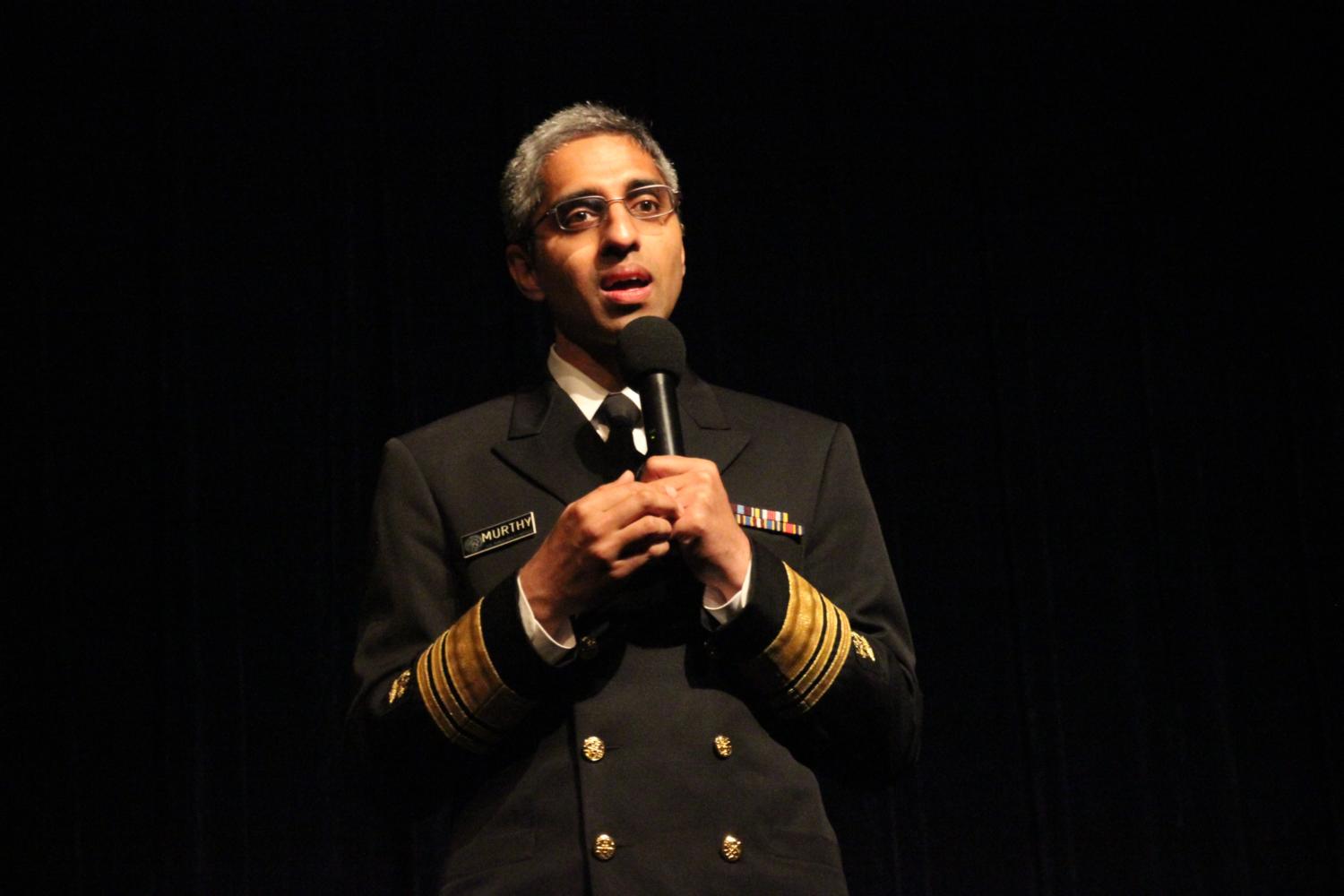 Murthy addresses a large crowd of MPSH students and faculty about the dangers and causes of increased levels of e-cigarette use among teens.

Marlowe Starling, Editor-in-Chief of The Panther

On Thursday, May 18, the U.S. Surgeon General Dr. Vivek Murthy walked down the aisle of the Miami Palmetto Senior High auditorium amidst a roar of applause from students and faculty. After three years of informing the American public about the dangers of cigarette and alcohol use as the Surgeon General, among other substances, Dr. Murthy returned to his alma mater to discuss the problem surrounding e-cigarettes among youth.

Student Council Senator Charles Noguera, President Jonathan Roth and leader of a local campaign against e-cigarettes Shelby Loeb led the discussion, covering some of the most pressing public health issues faced by our country.

Dr. Murthy, who graduated valedictorian from Palmetto with his sister in 1994, is the son of Indian immigrants. He studied biochemistry in college before going on to found an educational program called VISIONS Worldwide with his sister, Rashmi, to help inform people in India and the U.S. of the issues surrounding HIV and AIDS. Just a few years later, he founded TrialNetworks for the collection of information about drug clinical trials for pharmaceutical companies; a year later he founded Doctors for America with his wife, Alice, to improve the health care system shortly after he became Surgeon General under the Obama administration. But the prestigious position was never even a glimpse in Dr. Murthy’s eye — even as founder of multiple companies and graduate of Harvard and Yale University.

“Even after I became a doctor, it was never something I thought I would do until one day I had come off a red-eye flight from Los Angeles. It was actually my birthday, 2013, and I was picking up my dry cleaning at 7:30 in the morning, all bleary-eyed, and my phone rang,” Murthy said. “Something told me I should pick up the phone, so I did, and it was a representative for the White House asking if I would be interested in serving as the Surgeon General.”

His work as Surgeon General and the initiatives he took through Doctors for America began his long-running interest in policymaking and advocacy, which he continues to do today in the battle against e-cigarette use, among other health issues.

“In this job as Surgeon General, all of those different pieces had become relevant and helpful, and I don’t think I could have done the work I did without all those experiences,” Murthy said. “Sometimes you can’t connect the dots looking forward; you can only connect them looking backward.”

Using his own experience as inspiration, Murthy advised the new generation of Panthers on their own future decisions.

“Think each and every day, ‘What am I passionate about?’ If you pursue that, and let that be your most important guide, you’ll tend to find that’ll be the right thing.”

The success of students’ futures, he stressed, depend highly on the decisions they make while they are still young. From 2011 to 2015, the amount e-cigarette use among youth increased by 900 percent, and one out of every six students has used an e-cigarette within the past 30 days, Murthy said.

Contrary to popular belief, e-cigarettes — essentially the same thing as vape pens, another common name for them — can have detrimental effects on youth due to the addictive properties of nicotine, setting teens up for a potential long-term addiction to related substances and traditional cigarettes. The statistics themselves present an ironic situation: as the rates of smoking among adults declines, using e-cigarettes as a means of quitting, the rates of e-cigarette use among teens have skyrocketed, serving as a gateway to smoking traditional cigarettes.

In 1964, the Public Health Service released its first report on tobacco, revealing shocking evidence for the harmful effects of tobacco on the American public. That year, 42 percent of adults smoked, and today only 15 percent smoke thanks to the efforts of schools and communities. Every year, however, 480,000 Americans die from tobacco-related diseases according to Dr. Murthy, most of whom started smoking at young ages. Memory, concentration and impulse control are among the areas of the brain Murthy claims are severely affected by tobacco use.

“At your age, your brain is still actively developing until your mid-20s, [when] your brain is vulnerable to substances like alcohol or drugs or nicotine,” Murthy said. “[After 1964] policymakers thought of rules in place to help protect kids from tobacco — it was that work that helped reduce smoking rate.”

But nowadays, according to the Centers for Disease Control and Prevention, youth who vape are twice as likely to use traditional cigarettes down the road — a concerning bit of statistical research that especially concerns Dr. Murthy. As a doctor, he witnessed the after-effects of tobacco on his patients.

“They’ve often said to me, ‘Doctor, I just wish I never picked up that cigarette. I wish I had just said no the first time it was offered to me,’” he said. “You have a choice today, right now, to decide how you are going to be when it comes to tobacco, what decisions you’re going to make, what advice you’re going to give to people.”

Part of the reason for the rise in its popularity, he says, stems from the influence of advertisements. Murthy claims that seven out of ten young people have seen advertisements for e-cigarettes in public areas, online or printed in magazines, and the different flavors they sell them in also draw young people to vaping. Places including Providence, Rhode Island and some counties in California have placed restrictions on the sale of e-cig flavors to combat their use among teens.

Even though the detrimental effects of nicotine and list of tobacco-related diseases are not yet solidified due to active research, Murthy stresses the importance of making smart decisions early on.

“Why do you want to be an experiment when it comes to e-cigarettes?” he said. “This is a really, really important time in your lives, and the decisions you make about your body and about your education can have tremendous impacts on a young life.”

Using himself as an example of students’ potential, Murthy emphasized the importance of their decisions early on in life.

“What I want from all of you,” Murthy said to the crowd of students, “Is I want you to be able to look back on your life when you come back to Palmetto in twenty years or so and feel good about the decisions that you made, and say ‘you know what I actually invested in my future.’”

Students in attendance, including freshman Vincent Li, asked Dr. Murthy questions about some of the most pressing issues in our country today toward the end of the session. In response to Li’s question about the effects of the opioid epidemic in America, Murthy pointed out that 20.8 million Americans face substance-use disorders and addiction problems, yet only 10 percent of them receive treatment for it. The primary solution, according to Dr. Murthy: public education.

“We have to start thinking about this as a chronic illness; we have to eradicate some of the stigma around addiction,” he said.

Addiction — the primary issue surrounding the nicotine present in most e-cigarette products — affects the brain. Dr. Murthy explained that it impairs the functionality of young brains, particularly in regards to impulse control, stress response and decision-making, all of which can permanently hinder an individual’s ability to think clearly later in life.

“The truth is, if we don’t all work together to address the opioid epidemic, through public education and expanding treatment, and by incorporating prevention programs, then this reality is that we’re going to have more and more people who are overdosing and losing their lives,” Murthy said. “I have seen too many parents who have lost children due to drug overdoses than you would have thought, and each time I have that conversation with them it’s terribly painful.”

In close conjunction with drug overdose, youth suicide rates have also posed problems. Isolation, Murthy says, is growing in magnitude despite the technology intended to bring people together. According to him, 20 percent of adults claimed they felt lonely in 1980, and today that number has jumped to 40 percent.

“Isolation, and specifically loneliness, has a negative impact on some people’s health and their ability to do well in life, whether it’s in the workplace or in school,” Murthy said. “My belief is that everyone has the potential inside them to not only have a bright future and find a fulfilling life, but also [to] have an impact on the world. Everyone’s going to have hard moments in their life. In those moments we all need our anchors, and we can be those anchors for other people. We all have the ability to heal and to support.”

Murthy’s own parents, who served as a major support system for him growing up, were in attendance on Thursday.

“He was always positive that he was progressing in a positive direction, so because of that he was able to succeed…as Surgeon General,” father Lakshmi Narasimha said.

On a more personal basis, their pride in his efforts showed through.

“He always had this vision of serving the community that I think kind of guided him,” mother Maithreya said.

“My teachers at Palmetto were an incredibly important part of building the foundation for the rest of my life; they believed in me and reminded me to believe in myself,” Murthy said. “They really helped me think about life in a much more holistic way and I’m incredibly grateful for that.”

The experience of revisiting his high school alma mater left an impression on him that he truly cherished along with the rest of the student body during the discussion.

“Coming back here was an incredible source of joy; it’s something I’ve been looking forward to for a long time,” he said. “I feel a real depth of gratitude for this school, and the teachers like Ms. Evans and Mr. Bullock and so many others have helped me build the foundation for my life. Think about the experiences you had here, cherish them, and keep in touch with your friends as well.”

He owed much of his accomplishments to the influence people in his life.

“I became Surgeon General of the U.S. because I had teachers here at Palmetto who invested in me earlier on when I was trying to figure out who I was, if I really had what it takes to make it in life,” he said. “I’m here because I had my mother and my father and my sister who believed in me when things are tough. I’m here because of my friends, some of who I met here at Palmetto, who stuck with me throughout really tough times, whether it was a difficult relationship or a moment when I had no idea what to do with my career in school.”

His words of inspiration resonated especially with the graduating seniors.

“Success is not a solo journey,” he said. “I can tell you very clearly that I did not become Surgeon General just because of my own efforts. We all need each other to succeed. We all need to help each other be there for each other, so as you go through school and you leave here, remember that.”