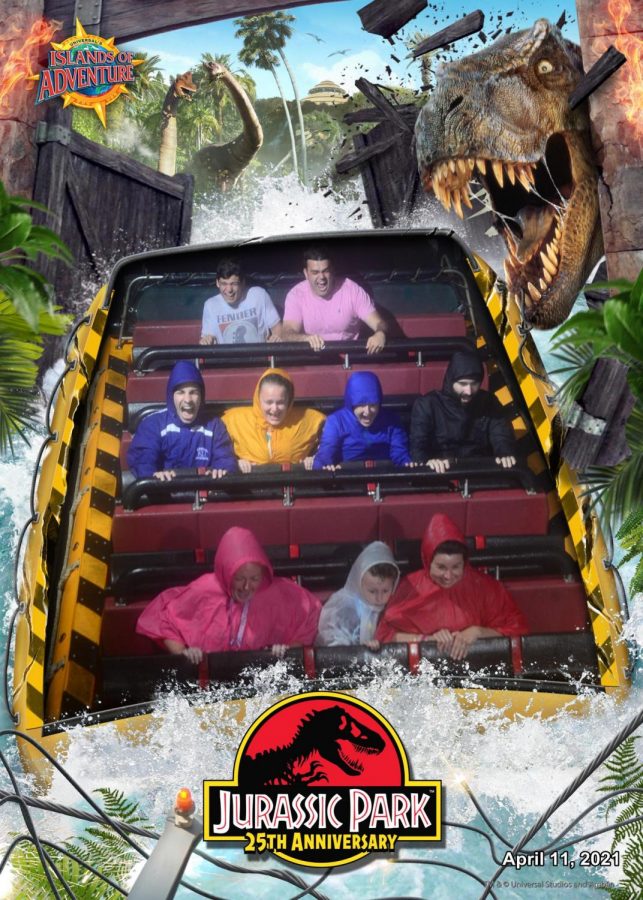 When on water rides such as Jurassic Park River Adventure, guests are permitted to temporarily remove their masks while remaining socially distant.

As a self-proclaimed theme park aficionado, Universal Orlando Resort basically serves as a second home for me (that may also have something to do with the fact that I am Floridian). Nonetheless, Universal Studios and Islands of Adventure have proven time and time again to be a source of nonstop entertainment, regardless of the pandemic, weather and several other unpredictable factors.

The numerous thrill rides serve as a staple to both parks. Hollywood Rip Ride RockIt sits right by the entrance of Universal Studios and takes you 167 feet up into the air while blasting their choice of music. Riders can choose between 30 songs that feature genres such as pop, rock, country, hip-hop and club/electronica as they embark on a series of loops, drops and high-speed fun.

A little-known fact about this ride, however, is that you can also access a secret list of songs by pressing down on the logo at the top of your music screen and entering a three-digit code. A full list of the “secret songs” can be found here. Regardless of your song choice, Rip Ride RockIt serves as one of Universal’s top attractions and provides a rush that other attractions have difficulty replicating.

Universal’s other dominant thrill ride resides in the Marvel Island section of Islands of Adventure. The Incredible Hulk Coaster starts off with a bang, with riders immediately accelerating from 0 to 40 miles per hour in two seconds while being launched out of a tunnel into a corkscrew. The ride eventually reaches 67 miles per hour with several drops, twists and turns. While it may not be for the faint of heart (or those afraid of a headache after riding), it has been one of the park’s top rides since its opening in 1999, and for good reason.

Hagrid’s Magical Creatures Motorbike Adventure, another top-tier attraction at Islands of Adventure located in Hogsmeade at the Wizarding World of Harry Potter, just opened in June 2019. Taking place in one of Hagrid’s Care of Magical Creatures classes, riders embark into his hut, the Forbidden Forest and a dark cave while hitting 50 miles per hour and, at one point in the ride, free-falling 17 feet. This ride is perfect for anyone looking for a ride that provides plenty of action, but not too much action.

While Rip Ride RockIt, Hagrid’s and the Hulk top my personal list of thrill rides, the parks have multiple other fun rides similar to them, including but not limited to Revenge of the Mummy, Harry Potter and the Escape from Gringotts and The Amazing Adventures of Spider-Man. Another ride to look out for in the future is the VelociCoaster, which will open in June 2021 near the Jurassic Park area of Islands of Adventure.

In addition to these roller coasters, Universal Orlando Resort offers a variety of other rides, including children’s rides, water rides and ride simulators. As an 18-year-old high school senior, I do not take much personal interest in the kids’ rides, but Seuss Landing in Islands of Adventure qualifies as a great place to go if you have young children in your traveling party. With multiple slow moving rides and an abundance of restaurants and stores, it can serve as a great spot for family fun or just to take a breather if you need one.

Water rides present a riskier choice, as if you get soaked on one of them, it may take quite some time to dry off. However, they prove to be a great option if you need a cool down from the hot weather, or just want to kill some time with another fun ride. The main three water attractions all reside in Islands of Adventure, relatively close to each other. Toon Lagoon features Dudley Do-Right’s Ripsaw Falls and Popeye and Bluto’s Bilge-Rat Barges, while the Jurassic Park River Adventure is at the center of the Jurassic Park area. From my personal experience, Popeye’s gets you the most wet, while Jurassic Park will get you the least wet. (This is based on my personal experiences. Please do not hold me accountable if I am wrong.)

In recent years, Universal has also added several new ride simulators that are not quite thrill rides, but still give a boost of energy nonetheless. Some act as shows that include moving seats, such as Shrek 4-D and Despicable Me: Minion Mayhem at Universal Studios. Others have riders board a bus and immerse them in a 360-degree ride experience, with multiple screens and interactions with the vehicle, like Fast & Furious Supercharged at Universal Studios and Skull Island: Reign of Kong at Islands of Adventure.

While some may worry about the idea of visiting a theme park during COVID-19, Universal has taken multiple precautions to keep guests as safe as possible. Each attraction has social distancing markers to ensure that each party remains six feet apart at all times. Additionally, the parks have a mask requirement for all guests at all times except when on water rides, where the vehicles have socially distanced seating. Ride attendants also give each rider hand sanitizer before and after taking part in the attraction.

Overall, whether you want to get an adrenaline rush with your closest friends or spend some quality time with your family, Universal Orlando Resort can be a great place to make memories and have an all-around blast.