The Implications of the Georgia Senate Runoff Elections 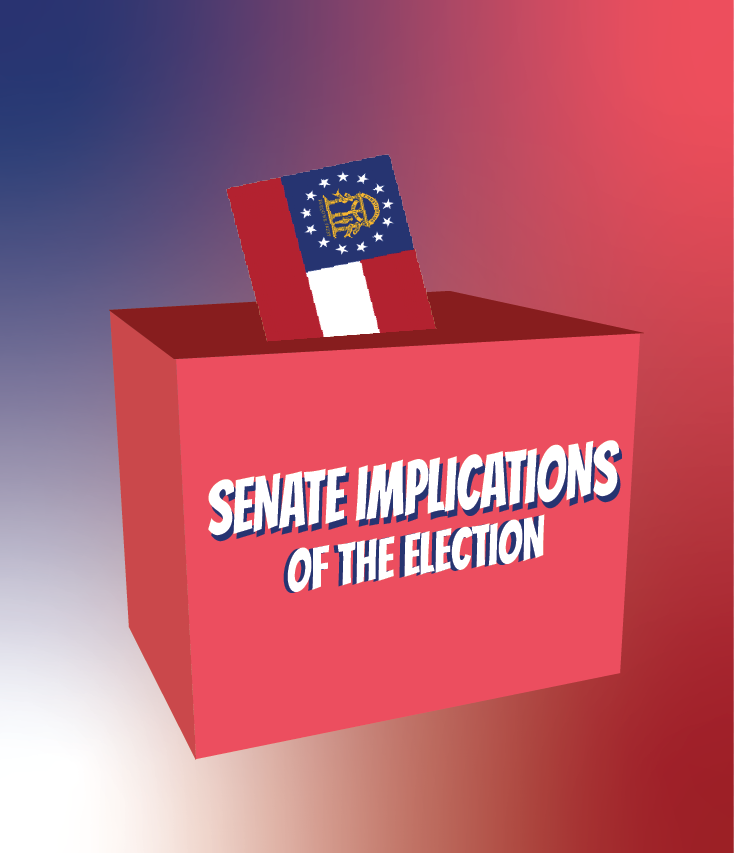 Following the Nov. 3 election, Georgia will hold its runoff senatorial races on Jan. 5. This runoff decides which party controls the United States Senate; Republicans currently control the Senate by a margin of 50 to 48, but the runoff could change this according to the Associated Press. If the senatorial control becomes majority Democrat, this could aid President-Elect Joseph R. Biden in passing legislation and appointing judges.

“The Senate is critical for anything that the president wants to do,” Castro-Root said. “And that’s from confirming federal judges to cabinet appointments to passing any kind of legislation.”

For many first-time voters, this year felt both exciting and anxious, even across state lines. Despite not having a senatorial race this year, Republican Florida Senator Rick Scott paid for an ad warning Georgia voters about voting for Democratic candidates.

“I think the most important thing that needs to be done is some serious legislation against internet misinformation. I truly believe that the polarization of this country is because of that misinformation,” Palmetto senior AP U.S. Government student Daniel Perez said. “However, I worry that will not be a top priority for either a Republican or Democratic Senate.”

On Jan. 5, Georgia will host its two runoff elections, one to resolve a regular election schedule tie and the other following a special election due to the retirement of Johnny Isakon, a Republican senator.

“Incumbents have an advantage in runoffs; this has been true in Georgia as well, I believe.  The question is will the Democrats have the same or better turnout for the runoff.  There is always a question of voter/ballot fatigue,” AP U.S. Government, AP Comparative Government and Politics Teacher Kenneth Speigelman said.

In the runoffs, the top candidates for the special election, Republican Senator Kelly Loeffler — who had been temporarily elected by Georgia’s Republican governor to fill the seat — and Democrat Raphael Warnock are running against each other in a tight race. Polls currently have Loffler at a 1% lead, according to Remington Research Group. Similarly, incumbent Republican Senator David Perdue has a slight .2% lead over Democrat Jon Ossoff, according to the New York Times.

“It’s really important, in my view, for Democrats to regain control of this Senate so that we can try to make a meaningful impact in people’s lives, especially climate change and climate justice,” Castro-Root said. “That’s really the issue that’s front and center for me above all else, because if we have clean air and clean water, if we have a functioning environment, that ties into every other issue that there is. And so having a Senate that really is working for the people is what I’ve been trying to do and what I’m continuing to do.”