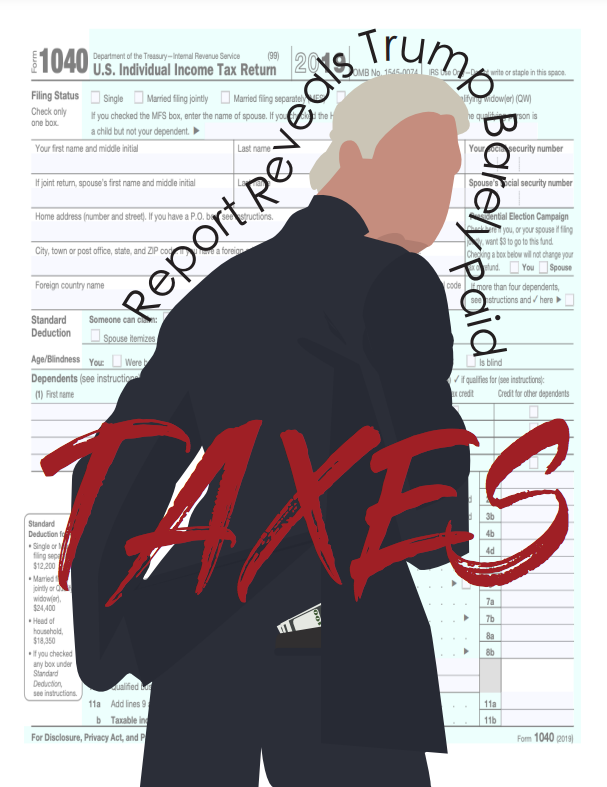 Last Sunday, The New York Times exposed President Donald Trump’s tax returns, which claim he only paid $750 in federal income taxes in the year he won the election, 2016, and his first year in the White House, 2017.

Many citizens felt surprised and upset at the news because of Trump’s billionaire status. Many expected that he paid a larger amount in federal taxes. According to the NYT report, he paid no income taxes in 10 of the 15 past years, because he reported losing more money than what he made.

The report also claims that Trump has hundreds of millions of dollars of loans due in the next four years, which could potentially be his second term in office.

An audit battle with the International Revenue Service involving Trump that has been occurring for over a decade, was brought to light. The battle revolves around the legitimacy of a $72.9 million tax refund that Trump says he claimed a decade ago. An adverse ruling would cost Trump $100 million.

Alan Garten, a lawyer for the Trump Organization says the claims are inaccurate and Trump denies the claims, calling it fake news. The NYT declined his request to provide the records to him and Garten says that for over a decade, Trump has paid millions in personal taxes to the federal government.

The report claims that while on the show “The Apprentice,” Trump wrote over $70,000 off as a business expense to style his hair.

In a debate in 2016, Hillary Clinton accused Trump of avoiding income taxes in which he responded saying that makes him smart.

Many people went to social media to post their outrage on the matter including many celebrities like Gabrielle Union, Josh Gad, Jim Carrey and Kumal Nanjiani, saying they paid more taxes than the billionaire President. Joe Biden, Trump’s opponent in the 2020 Presidential Election, posted a “Trump Tax Calculator” on Twitter to calculate how much more someone has paid in taxes.

The NYT has not published any sources to their documents as of now but additional articles will be published soon.