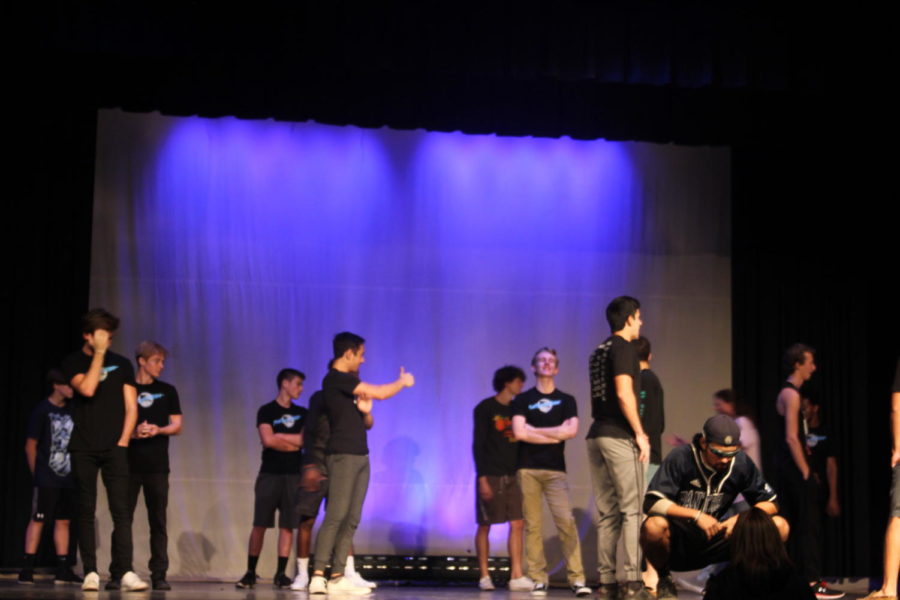 The Mr. Panther contestants prepare their first dance of the show at rehearsals

For Palmetto students, February is much more than a short month and Valentine’s Day: it’s Mr. Panther. After months of preparation, 23 of Palmetto’s male students have prepared their acts consisting of their talents such as dancing, juggling, magic tricks and much more.

“We have been preparing for about three to four months, four times a week,” Mr. Key Club, senior Zeeshan Ahmed said. Some contestants have been looking forward to participating in Mr. Panther since the beginning of high school. “[I have been preparing] Ever since freshman year,”  Mr. Soccer, senior Grant Islin said. “Every day was a grind to become the best.”

This year most of the contestants are seniors performing for their last year of high school.

“I was offered to be in it junior year but I saved it for senior year to do it with all my boys,” Mr. Special Olympics, senior Jose Isaza said.

When sign-ups became available, students were quick to join.

“I signed up during the fall when the flyer came up for the show,” Ahmed said. “I’ve always wanted to do it as a senior.”

Unlike the other first-time contestants, senior Mr. Model United Nations, Raul Vera has been part of Mr. Panther through his whole high school career.

“Personally, this would be my fourth Mr. Panther to this date and it’s still yet to lose its luster,” Vera said.

While many people signed up to be in the show, only a select few remained to actually perform for the school.

“We had a couple weeks where many of us were weeded out,” Vera said. “We really didn’t have to audition to be in the show. But just like the case is for most, candidates aren’t graded prior to the show but rather during it, leaving many practicing months to perfect their talents and formation.”

The theme of this year’s Mr. Panther will be Baywatch. The show will begin with a video and opening dance, and will lead to the introduction of the hosts, judges, and last but not least, the contestants. The show will progress into the beach attire competition and dances by the Variations.

Between performances, the hosts will announce the top ten based on performance. Through a series of questions they will be narrowed down to the top five, and the show will end with the announcement of Mr. Congeniality, Mr. Talent, and Mr. Panther of 2018.

Some contestants hope that their personal skill and talent will help win them the title of Mr. Panther.

“I’m good at soccer and my audition was juggling a soccer ball and doing different skills with the ball,” Islin said.

Others will rely on their personality to get them through.

“I didn’t really prepare, just hoped my personality and way of life would help steer the way and be a funny asset to the show,” Isaza said.

For students who have bought tickets and are planning to attend, a comical night awaits them.

“Everyone should expect to see a bunch of funny, wild and good looking young men put on a great show and make everyone in the crowd go wild.” Islin said.