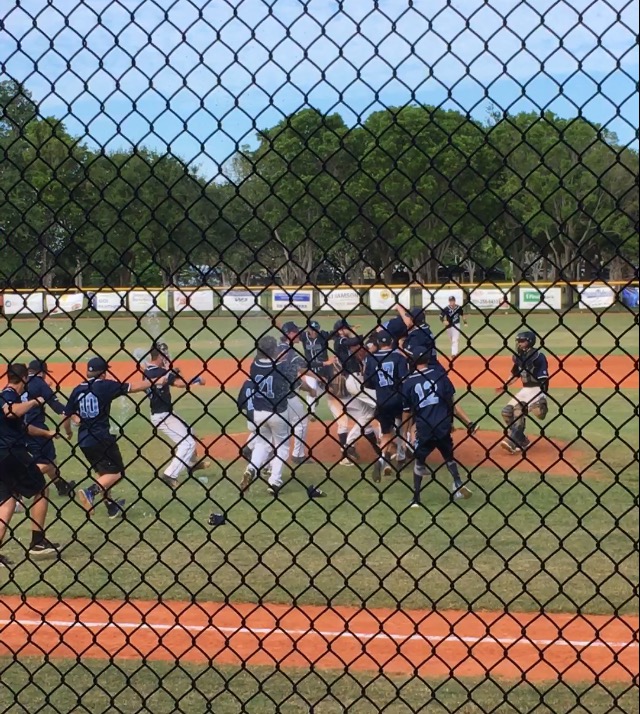 Survive and advance, they did. Panther baseball beat the Coral Gables Cavaliers in the Class 9A regional finals at Coral Reef Park today, 3-1, to advance to next week’s state semifinals in Fort Myers.

Palmetto relied on senior Miami-Dade All-District Team Pitcher of the Year and highly touted MLB prospect Matt Turner to return to the state final four for the first time since 2007, and the second time in program history. Today’s game, which drew a crowd of about 1,500, started with turmoil for the Panthers, who entered the game with a 21-6 record.

Turner gave up three hits and a run in the top of the first inning. Palmetto, however, responded with two runs courtesy of senior designated hitter Nick Deegan and catcher Eddy Arteaga via consecutive singles, in the bottom half of the frame. The team did not look back; battling adversity is nothing new to the Panthers.

“It was a team effort,” Turner said. “They scored a run, and our team came back and did their job to take the lead. I knew I had to do my job and stop the other team anyway I could.”

The Panthers and the 13-14 Cavaliers had already battled earlier this year. In their only previous meeting this season, an Apr. 20 tilt at Gables, it took Palmetto 11 innings to defeat their crosstown rivals 9-5. Despite the Cavaliers’ subpar record entering the game, their mere run to the regional championship did not cause Panther players to overlook them or look ahead. The teams were differentiated, it seems, by an off-field factor. Team chemistry.

“When I go out there, I know I have 25 of my brothers behind me,” Deegan said. “We all get along so well and we work so well together and that really showed today.”

After the Panthers broke open the game in the first inning, both teams settled down and the nerves in both dugouts seemed to subdue. Turner threw a complete game and strengthened his portfolio for scouts after finishing with ten strikeouts. Gables batters looked overmatched by the 6’5” lefty from the second inning onwards and the game seemed to be in his hands.

After adding an insurance run via an RBI single by Deegan in the bottom of the sixth inning, who improved to 18 RBIs on the season, the Panthers were on the cusp of history.

By the time Matt Turner retired the second-to-last out of the regional championship, a growing crowd of students, faculty, friends and family of team members excitedly waited outside the dugout. Victory was imminent. On the very next pitch, Coral Gables senior starting pitcher and designated hitter John Kenney hit the ball between second and third base, junior shortstop Victor Valderrama ranged to his right, and threw the final out to junior first baseman Dickson Aburto. Pandemonium ensued.

Hundreds of people rushed the field, dogpiled onto players and subsequently congratulated the pride of Palmetto. An innumerable amount of practices, years of youth baseball, junior varsity and now varsity experience had payed off: dream turned into reality instantly and the Panthers understandably took in their moment of glory. They know, however, that the season is not over and a state championship, while closer, is not a reality yet. When they take the bus next week across to Florida’s west coast, they vow to stay prepared and not lose concentration.

“[We’re] just taking it one game at a time honestly,” Deegan said.