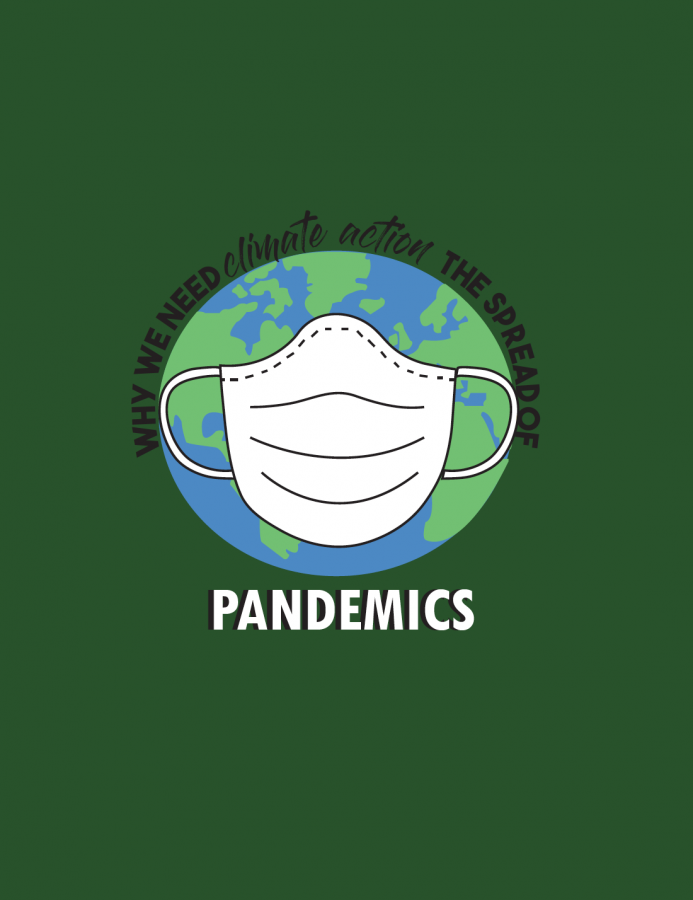 The coronavirus pandemic has wreaked havoc on the daily lives of Americans. Inarguably a health crisis, U.S. cases currently total around 852,253, according to the New York Times. Unknown to many, this serves as a mere preview of what the future holds if we do not take climate action.

Experts suspect the coronavirus originated in bats, according to the CDC; however, the origins remain unclear. If asserted, this would make coronavirus one of the many instances of the increasing spread of zoonotic diseases.

Zoonoses are diseases and infections that can be transmitted from animals to people either directly by a vector or indirectly. A 2016 report from the United Nations Environment Programme (UNEP) found that 60% of all infectious diseases in humans were zoonotic, and discovered an increase in new emerging contagions exacerbated by the climate crisis.

This can be attributed to a variety of factors related to climate change, including extreme heat. Extreme heat has the highest mortality rate for all weather events in the United States, according to a study published by the U.S. National Library of Medicine. This becomes increasingly worrisome, considering that the United Nations recently announced that the past decade has been the hottest ever recorded, warning that the higher temperatures are expected to contribute to more extreme weather events in 2020.

In Miami-Dade, it is expected that we will live almost half the year in “danger days,” or days where the heat index makes the outdoors intolerable by 2050, according to a study published by the Union of Concerned Scientists. Besides general public health, the spread of pandemics has become an increasing risk.

Extreme heat allows vectors that transmit infections to become more populous, according to the book Climate Process and Change. This results in an increase in the transfer of pandemics. Similarly, heat allows these illnesses to continue, as evident by a 2013 study by PLOS, which found that influenza seasons increase following warmer-than-average winters.

Other factors related to climate change that will impact the spread of pandemics are the melting of glaciers and food insecurity.

In 2015, researchers from the Cold Spring Harbor Laboratory identified 28 previously- undiscovered virus groups in a melting glacier. When this ice melts these pathogens can make their way into streams, rivers and waterways, eventually making us sick, thus illustrating the vital need to address the climate crisis, especially considering that this melting will only get worse as it gets warmer.

Moreover, food insecurities prompted by climate change will serve as a driver for humans to eat more bushmeat (meat from wildlife species) and bats, according to a paper published by the academic journal AAAS. This results in an increased spread of illness and fuels the spread of pandemics from these wild animals.

Outside factors besides climate change driving this spread of pandemics include deforestation and urbanization. The construction of new roads, mines and hunting reserves, which bring humans in contact with wild animals, catalyze the transmission of pandemics. For example, SARS, a viral respiratory illness, is suspected to have spread from bats to civet cats to humans, according to NPR. Similarly, the spread of the Ebola epidemic coincided with deforestation efforts in West Africa, according to The Guardian.

Science illuminates how we need a drastic change in the United States. The contributors to climate change in the United States are the fossil fuel industry (oil, coal and natural) and the agricultural industry (from livestock such as cows, agricultural soils and rice production), according to the Cleo Institute. There needs to be a systematic change now, including a switch to renewable energy.

According to the 2019 IPCC report by the U.N., we have 12 years to change our habits for global warming stay at a maximum of 1.5 C warming. Even a half-degree of warming can significantly aggravate the risk of drought, floods, extreme heat and poverty for millions.

Six municipalities of Miami-Dade County have already declared climate emergencies, including the City of Miami Beach, the City of Miami, the Town of Surfside, the Village of Palmetto Bay, North Bay Village and the City of Coral Gables. These declarations serve as a stepping stone for our communities to enact meaningful change by putting environmental issues at the top of the agenda.

Since the climate crisis will worsen, our governments need to act now to avoid the catastrophic effects we will face where pandemics like coronavirus become a common occurrence.

How you can become involved in climate action and the declaration of a climate emergency in your municipality:

Voting: Vote for a political candidate who realizes this is an issue and is willing to take measures to address it. Pre-register to vote starting at 16 years old here.
Contact your local officials: Speak to them about your concerns regarding the climate crisis and your municipality.
Advocate for climate action: If you cannot vote, get involved with local environmental organizations that seek climate action, such as Fridays For Future, Extinction Rebellion, Florida Climate Strike, 350 South Florida, The Sunrise Movement and the CLEO Institute.

Join the Climate Leadership Information Project program at Palmetto: Another way to spread  climate awareness is through education. CLIP advocates for climate action, contacts elected officials, educates our peers and families about the climate crisis and seeks to create meaningful change at Palmetto.