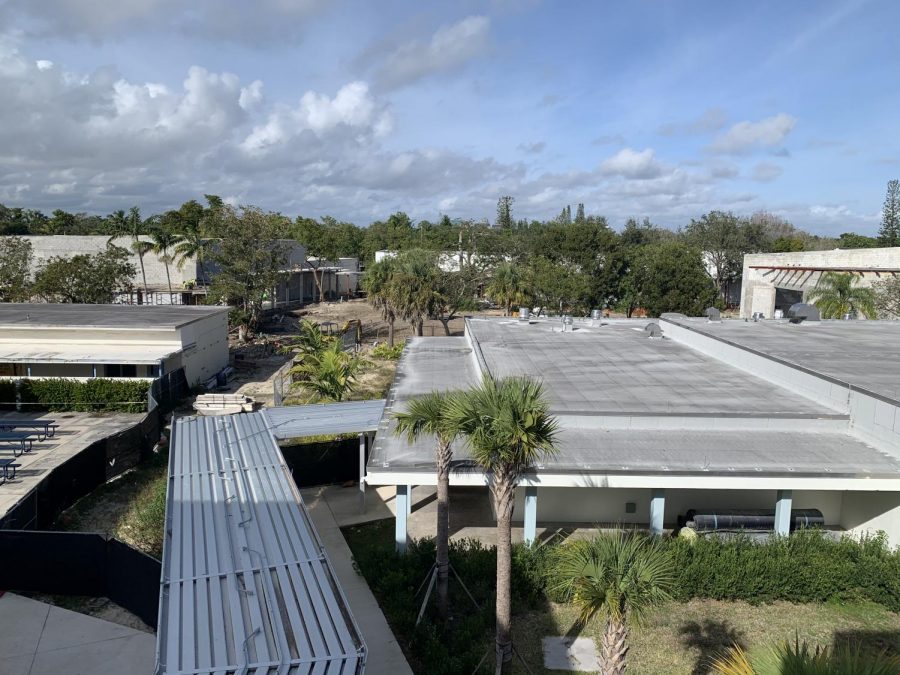 Miami Palmetto Senior High's reconstruction has been focused on the part of the school where the art wing (rooms 900, 902 and 904) used to be. (Photo courtesy of Jonathan Newman)

The second phase of Miami Palmetto Senior High School’s construction plan is nearing completion. The demolition of the former 100-800 wing has made way for the new visual and performing arts wing, as well as the new cafeteria expected to open by March 2021.

Palmetto principal Victoria Dobbs estimates that students and teachers should move into the new visual arts wing by mid-to-late January.

“All the preparation to tear down the old art classrooms [rooms 900, 902 and 904] will be done over winter break, and the art teachers will have moved out of their classrooms by the end of this week,” Dobbs said.

The construction workers plan on taking out certain mechanical components and salvaging scrap metal. They also want to make sure everything is environmentally safe when digging underground to finish connecting the wiring from the existing campus to the new building.

Once class begins after winter break, the three art classes will temporarily move into vacant rooms in the 2000 building while the construction workers move out old supplies and furnish the new visual arts wing.

“We are going to donate art supplies that are still in good condition to other schools… and move excess furniture and teachers’ items into storage for a few weeks,” Dobbs said. “School hasn’t operated at full capacity yet this year, so the extra space [in the junior lot] hasn’t really been needed for parking, but it did allow us to put a couple of trailers there for storage.”

Since last school year, the formerly closed junior lot on the corner of 120th St. and 74th Ave. has reopened to half-capacity, yet it has not made much of a difference since the majority of the student body attends My School Online. Although COVID-19 has hindered in-school operation, it has actually proved beneficial to the construction schedule.

“The pandemic actually allowed for the construction company to work every single day, all day long because it didn’t interrupt while we were out in March and all throughout until we returned in October,” Dobbs said.

Dobbs expects for the performing arts wing to open ahead of schedule some time in February. The wing includes a black box theater, new auditorium, choral rooms, refurbished band room and new dance studio. The wing will also feature new covered walkways and a green courtyard adjacent to it.

Palmetto sophomore, Thespian and competitive drama student Ava Goldenberg has shown excitement towards the black box theater in particular, as it allows for smaller performances inside and can also open via a garage door into an outdoor stage.

“I think it [the blackbox theater] will give us more opportunities performance-wise since it will allow us to perform cabaret style performances and just let us get more creative in general with the styles of shows we do,” Goldenberg said.

Due to the construction and the pandemic, all drama classes have occurred outside. This has provided the program with some obstacles, yet Goldenberg remains optimistic for the future.

“Class will be more inclusive because there are a lot of distractions when you work outside, like people walking. I’m excited that we will finally have enough space to work on dance,” Goldenberg said.

By March, the two year long construction process at Palmetto comes to a close, and students can experience the fully modernized school for the first time.

“It’ll be very enticing and appealing for students who want to come in and have these really beautiful classrooms and areas to perform,” Dobbs said. “So I think it’s an enhancement.”