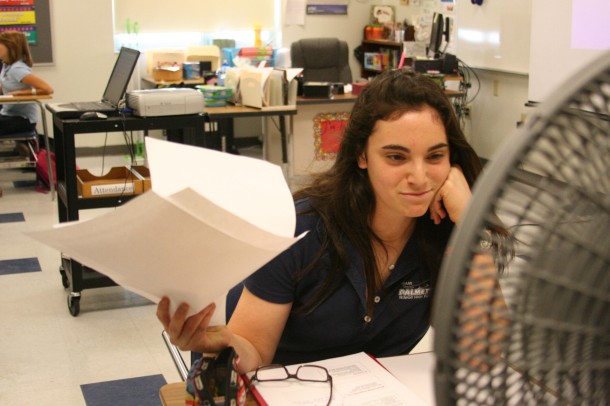 The sun, the sand, the heat and humidity. Palmetto’s South Florida location makes air conditioning a necessity for the comfort of the school’s populace and the preservation of school property. However, Palmetto does not control the AC, and teachers have no autonomy in controlling the temperature levels in their own classrooms. Some rooms suffer sweltering heat, while others combat chilly conditions.

“I would rather have it freezing because I move around a lot, but I realize for the students it’s pretty cold; I always provide a blanket,” Anatomy teacher Lynn Evans said. Her room in the 500s building has a reputation for being exceptionally cold, but Evans realizes that the nippiness of her classroom is only temporary. “When the weather gets colder, they’re [the district] going to turn the AC off and it’s going to get really hot in the classrooms.”

“Basically for the schools we turn the AC on at 5 am and turn it off at 9 pm on weekdays and shut it off for weekends unless there are any functions at the school during the weekend,” EMS technician Juan Rodriguez said.

“I personally think it’s a good program, but it needs to be tweaked to meet each school’s needs,” Bales said. “It’s a double-edged sword: we want to save money, but at the same time, what’s the effect on the buildings, particularly the older buildings like ours?”

The county-wide air conditioning policy was implemented to cut costs, but, as the recipients of this policy, Palmetto faculty questions the long-term economic effects. Chemistry teacher Dr. Susan Kamons experienced the financial costs of this policy first-hand when all of the chemicals in her room were ruined after a summer of no AC.

“The idea by the district is to be cost-efficient, and by turning off the air conditioning, they’re able to produce the figures they need, but the ultimate experience is thousands of dollars of chemicals that are ruined by the heat from turning the air conditioning off during weekends and long breaks,” Kamons said. “In the long-run, we as a school lose because we’re the ones that have to pay for the new chemicals.”

“The problem is that to save money and conserve energy, the district turns off the AC units over the weekend, and when that happens, the classrooms build up humidity, which damages books, copy paper, and contributes to mold growing on the sides of desks,” Spivak said. “The district just bought us new textbooks and they’re already warping.”

Health, in addition to funds, is also at risk due to the correlation between AC problems and mold growth. Studies show that dampness and mold in schools cause a significant increase in several respiratory and asthma-related health outcomes, according to the Environmental Protection Agency (EPA)’s website.

“I have chronic itching eyes, sore throat, and coughing. This is what I have to live with every day,” Spivak said.

Indoor air quality plays a major role in schools’ academic performance. The Centers for Disease Control and Prevention lists asthma as one of the leading causes of school absenteeism. Good IAQ in linked to increased productivity and improved performance of mental tasks in both, according to the EPA.

For schools, major risk factors include microbial concentrations in the air or in dust on floors; visible or odorous signs of mold; or dampness and mold in the building at large, according to the EPA website. Recently, under the leadership of Environmental Remediation Project Inspector Charles Armpriester, under the MDCPS Department of Asbestos Management, certain classrooms underwent “microbial remediation” to combat these effects.

“They looked at some storage space in the locker rooms and in the coach’s office by the gym. In [the] yearbook room and the TV Production studio there were ceiling tiles with stains. Ms. Spivak’s room had mold growing on the AC vents,” Bales said. “The problem lies in a combination between the high humidity from living in South Florida and keeping the air conditioning on really high. Spivak would walk in first thing in the morning and everything would be damp, meaning the AC was probably on all night when it should have been off. The most affected room was the PE storage area. Most of the tiles were stained, probably from leakage that built up over time. There are still a few rooms that they are coming back to clean up.”

Despite these issues, Bales insists that the mold imposed no immediate danger. The school received an official health inspection on September 29 and received a satisfactory report.