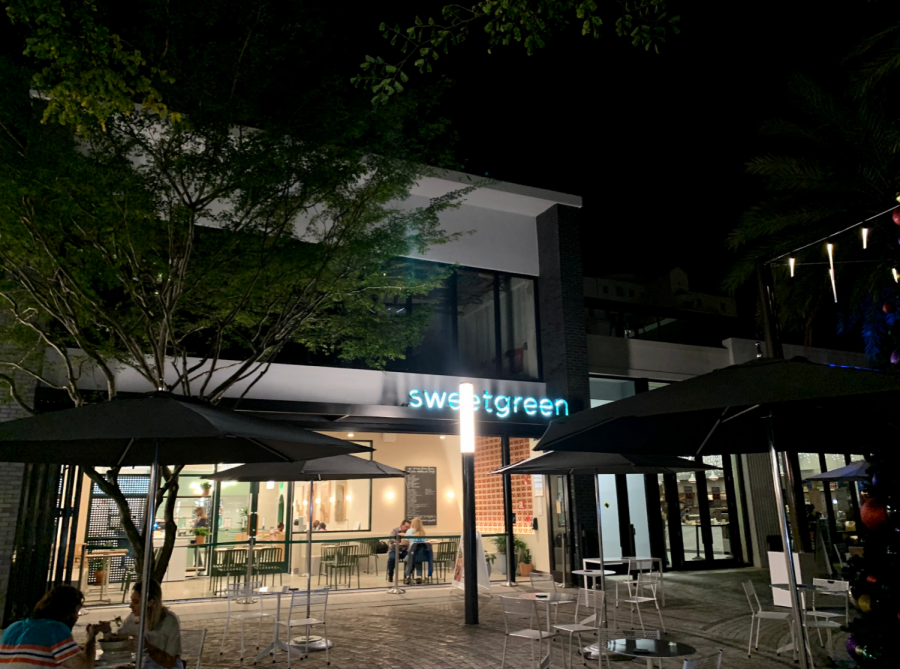 A look at Sweetgreen’s restaurant entrance and outdoor dining area.

On Dec. 4, the chain Sweetgreen opened its first restaurant in South Florida, offering Floridians healthy, local and sustainable food. Even as a national restaurant chain, Sweetgreen interacts with locals through their food sourcing, literally connecting to the community.

While the location in Coral Gables is currently the only location open in South Florida, Sweetgreen plans to expand to Wynwood, Coconut Grove and Sunset Harbor; as of right now, the restaurant has not announced specific opening dates for the other locations.

Founded in 2007, Sweetgreen first opened in Los Angeles to provide people with healthy food. The restaurant operates by the ethos that food offered should impact the customer, community and environment in a positive way. Consequently, each individual restaurant has different menu items based on their location, as they source their produce from local vendors.

Sweetgreen also works with local artists to create a distinctive ambiance in each restaurant. Each restaurant has a different architectural makeup, making it unique to the location.

“I was excited [about the opening] because I have friends in the Northeast and they love it, and they talked about it,” Miami Palmetto Senior High junior and Sweetgreen customer Jordyn Lazar said.

Sweetgreen officially opened on Friday, Dec. 4. In accordance with their opening, the restaurant partnered with local vendors such as The Salty Donut to organize a giveaway for the first 100 guests who ordered their meals online.

Moreover, Sweetgreen Coral Gables offers a unique menu based on the location, featuring bowls such as the Chicken Tostada, salads such as the Veggie Caesar and sides such as Rosemary Focaccia. Guests can also choose to create their own custom salad or bowl from an array of produce options.

While Sweetgreen plans to expand in South Florida, they have already made a substantial impact on the local community, as the restaurant supports local businesses and provides guests with healthy but delicious food options.

“It is definitely a change because there are a lot of unhealthy fast food restaurants and [here] it is so fast and easy to access,” Lazar said. “It is also healthier and not that expensive, and that is what Miami needs.”