Making a Splash: A Look Into Palmetto’s One Woman Dive Team 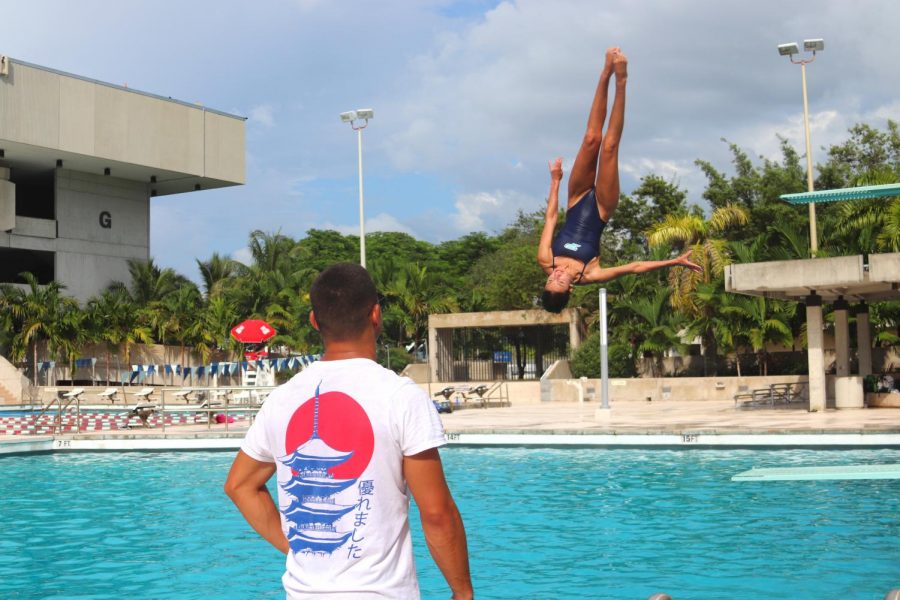 In a swim and dive department of over 44 athletes, there lies one singular female diver plunging Miami Palmetto Senior High into the world of competitive diving. Four years ago, senior Isabella Reyes brought life back to the diving team, which originated in the 1990s at Palmetto. She acts as their only current member.

“Freshman year, I looked for the swim coach, and I told her that the shirts had swim and dive on them and I was like, ‘Is there a dive team?’ and she said no. Sophomore year, she got a diving instructor to coach me and a bunch of other kids and then it ended up being me and two other girls who actually competed,” Palmetto Dive captain and senior Isabella Reyes said.

When Michelle Uhle, head coach of Palmetto Swim and Dive, took over the department four years ago, she discovered that the forgotten dive team was necessary to compete at state competitions in swimming. Opportunity struck when she found Reyes.

“When I took this over four years ago, there was no diving. I went to [the state competition] with my four kids and was watching the competition and I realized we cannot compete unless we have diving, so I talked with Batten and he agreed we could start the dive team,” Uhle said.

“I went and found a dive coach that was training at the University of Miami for the Olympics, so she was the coach for the last two years. Since she had to go back to California, she recommended Briadam, who was also training for the Olympics,” Uhle said.

As a diver, Herrera holds a multitude of awards, including seven-time national champion, a two-time World University Games medalist on the 1-meter and selection as the flag bearer for the U.S. delegation at the 2017 World University Games. This past June, Herrera participated as a semifinalist in the USA Diving Olympic Trials.

“I started diving when I was eight back in Cuba, and I was a gymnast before that, and then I stopped and I saw diving on T.V. so I wanted to try it. I moved to Miami, and I started diving at the University of Miami with Coach Laurie and Randy and I just kept going from there,” Herrera said.

Being the only diver, however, does not intimidate Reyes; instead, she embraces her solitude.

“The one-on-one attention with my amazing dive coach has been so beneficial since he could really correct my techniques and the way I do really simple dives, so when I get to the harder ones, they come out better and just more fluid,” Reyes said.

Practicing at the Miami-Dade College Kendall campus twice a week, Reyes perfects eleven primary dives, which are scored in championship meets based on the starting position, the take-off, the flight and the entry into the water.

“There are three main competitions: districts, regionals and states. States is when you compete against everyone in Florida,” Palmetto Diving Coach Briadam Herrera said.

For Reyes, diving is much more than awards and competitions. This sport reminds her of youth and highlights the joy within her days.

“You’re just jumping on the board and you’re flipping. It’s just like when you’re a little kid; you go to the trampoline, you start flipping. It’s literally what it is, just like a sport,” Reyes said.

While last year presented a challenge for athletes due to the pandemic, Reyes continued to make a splash at competitions.

“Last year, we did not have a season at all. I was just called to do districts, regionals, and I made it to the states last year for the first time, which is so cool. I made 13th in the state, and I got the All-Dade Award,” Reyes said.

The swim and dive team has also gifted her with an irreplaceable family.

“It gave me a big family at Palmetto. I made a lot of my friends out of the swim team, people I care about and that care about me. I couldn’t imagine high school without this team,”  Reyes said.

With only two other diving teams active in Miami-Dade County Public Schools, Palmetto’s team provides Reyes with a unique opportunity to gain exposure to competitive diving.

“Nobody really knows about diving here,” Herrera said. “We are definitely trying to get more people involved in diving and introducing them to this whole new world.”

Palmetto welcomes divers of all levels, and Reyes hopes that the team can ignite a passion for diving in other students, just as it did in her.

“Push yourself to try something new because you don’t know what you can get out of it. Just push past your reservations and just get started and from there see what happens; have no regrets,” Reyes said.