Inside the Darkroom: Photography Class Profile 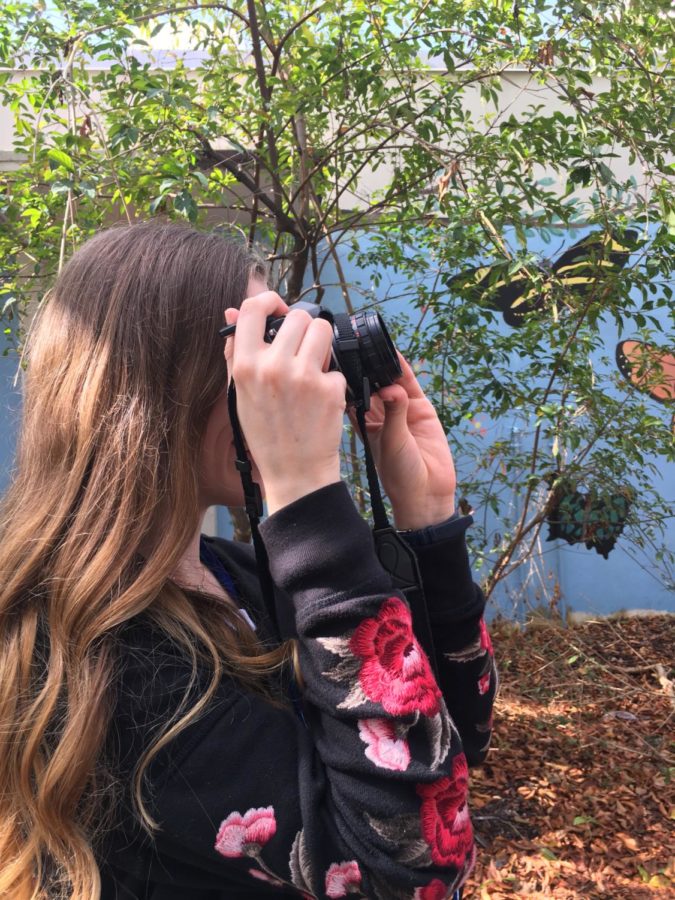 Brooke Brown adjusts her settings before taking a photo.

The tapping of a pen on a desk, the flipping pages of a textbook, the ringing of a bell, the bustling in the hall. Take in a breath, and it starts all over again in a slightly different seat. At times, high school may seem like a monotonous routine. Thus, creative electives, such as photography, offer students a break from the uniform world of academics and, instead, allows them to enter an environment that nurtures variation and imagination.

“Not only does [photography] class have an impact on their creativity, but it is also like a little bit of a therapy for them, like a release,” Advanced Placement photography teacher Katharine King said. “They get to come to school, have their academics and then in the middle of it, they get to do things that you can’t do in a lecture class. It’s more freeing and thinking outside of the box and expressing themselves.”

Seeing her students progress from peering confusedly at a roll

of film to then letting their curiosity launch into innovative projects that pay extra attention to lightning and angles, brings King an abounding sense of pride.

“Well, when I get [Photography 1] it’s like they are a clean slate and they don’t know really anything about the camera as far as film goes,” King said. “And then when I have them in AP level, they are already coming up with their own projects and they are coming up with ideas that they wouldn’t have even thought that they could think of, and some of them are even getting scholarships from it.”

Students, such as senior Delaney Richman, have gained a deeper appreciation for the class, thinking of it as more than an art credit.

“If you don’t do photography, a lot of people say that people are always taking pictures and that they won’t remember actually being in the moment, but a lot of the times I actually look at the pictures from vacations and it helps me feel like it’s not a far away memory, like it’s still with me,” Richman said.

Now at the AP level, Richman says that becoming more perceptive is a big plus that comes from taking photography, allowing her to see the world with a new outlook.

“I feel like once you start doing photography on a regular basis, you start to look at the world differently, like when you are walking places or you’re outside, you start to look at how the light is hitting something more, or from where you are standing what something looks like,” Richman said. “You are just more aware of your surroundings because now you are looking at things from a slightly different point of view. It’s not just taking it all in at once; you kind of focus on smaller things.”

Senior and Photography Club president, Todd Melgaard, also takes AP photography and was initially enticed to take the class because it offered a classic way of taking photos in today’s modern world.

“I have always been interested in photography years before and finally getting the opportunity to study it allowed me to get more in depth of a hobby that I enjoyed,” Melgaard said. “And doing it with film was an interesting way of taking photos in a timeless way without [digital] technology.”

Melgaard is fascinated by the process of photography, developing photos being his favored step.

“When you are in the darkroom, and finally are putting the paper in the developer and seeing it come from just a white piece of paper and seeing your photo come to life in front of you is my favorite part.”

To encourage fresh visions, King organizes biyearly sketchbook gatherings, which allow students to share their ideas for projects and inspire their classmates. King take parts in the activity, too.

“In my upper levels, they have an assignment where it’s a moleskine notebook. It’s a little sketchbook about the size of an index card and they have to fill it halfway by December and the other half by the end of the year; and when we get to those due dates we all get to sit around the table and pass them,” King said. “So as we are passing our sketchbooks around, everyone sees each others stuff and they say ‘wow, that’s really cool. That inspired me to do that as well.’ They just get a better feel for their classmates, and then I make one as well to help inspire them a little bit more too.”

Currently in Creative Photography 2, junior Brooke Brown takes joy in all she has learned in class. She is especially thankful to her teacher, King.

“I really understood the importance of the exposures within the class, like if it’s too sunny outside you need to know which setting to use because if it’s not right then the picture is going to come out too light or dark,” Brown said. “[King] always tells me to focus on the candids because sometimes posed pictures are too posed and it gives you nothing and with candids you get so much more. She is just such a great and helpful person and teacher.”

Students agree that even after they leave the classroom, photography remains a passion instilled within them.

“Anywhere you are at, there is a photo to be taken,” Melgaard said. “Because there is always that new angle or different perspective or something you can do to just find something new.”