How The Queen’s Gambit Is Sparking Chess Playing 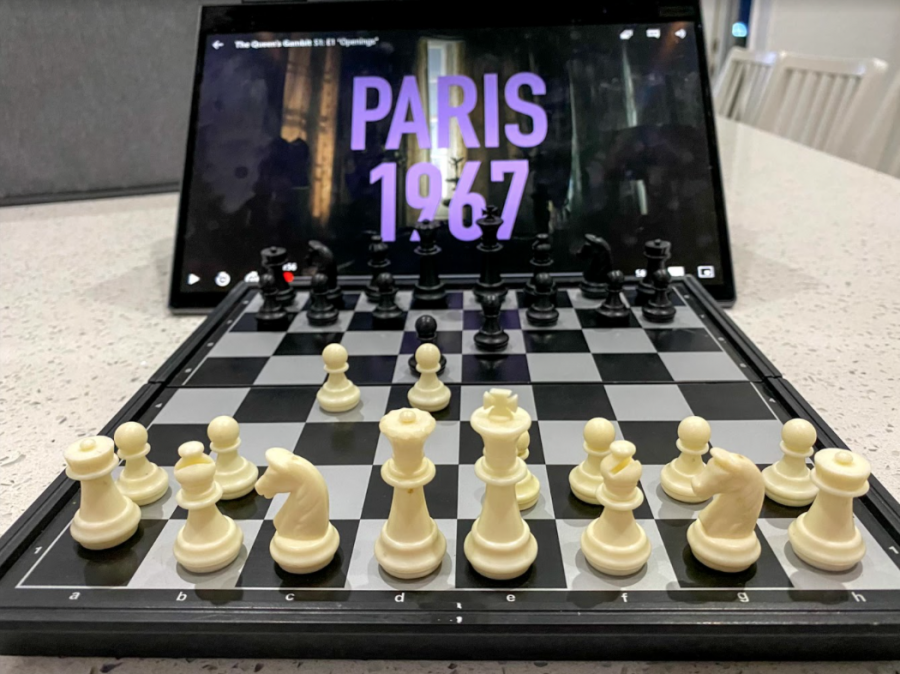 With the rising popularity of the Netflix mini-series "The Queen's Gambit", the game of chess itself has seen a rise in recent interest as well.

In 1983, American author Walter Travis debuted his newest novel, “The Queen’s Gambit.” The piece tells the fictional tale of Beth Harmon, an orphaned girl who would grow up to become a professional chess player. A Netflix miniseries of the same name recently revitalized the story of Beth Harmon for the screen.

The show’s writer and director, Scott Frank, has attempted to get the show on air since 1992, when he originally purchased the screenplay rights from Tevis’ widow, Eleanor Tevis.

The seven episode long chronicle released on Oct. 23, 2020 and has since received critical acclaim and reached fans from both within and outside the global chess community.

Netflix states that the show has grown into their largest scripted limited series, with over 62 million households having viewed it as of Nov. 23, 2020, a mere month after the show’s original release.

With the show’s popularity has come a large influx into the chess market. This influx originally came about with the COVID-19 pandemic and many long hours spent indoors quarantining. According to Nick Barton, chess.com’s director of business development, since March, 12.2 million new members have joined the website. Of those, 3.2 million came after “The Queen’s Gambit” premiered.

“…it deserves the most praise for really popularizing chess in the public eye,” junior and secretary of Chess Club Delaney Dvorsky said..

Dvorsky has ranked first place in local, state and even regional competitions.

Physical chess has also seen a large increase. According to the NPD Group, a market research team, chess set sales have increased by 87% within the United States and chess books sales have increased by 603%. This acts as an unprecedented shift in the market after many years of dwindling  chess set and chess book sales. The show also succeeds in its representation of women within the chess community as well as themes that many can relate to. Dvorsky herself feels that she can relate to Harmon’s character.

“Beth got placed against the only other woman in the first round of a tournament. I recall talking to an older woman during a tournament who recounted to me a practically identical scenario she had experienced as a young child,” Dvorsky said. “I hope the story of Beth Harmon can motivate other young women to maybe pursue the game moving forward into the future,” Dvorsky said.

The profound cultural impact of “The Queen’s Gambit” has expanded the chess demographic to a new generation of would-be players and tells a tale with representation and real-life issues that extend way past the chess board.