Fun Recipes for Thanksgiving and Friendsgiving 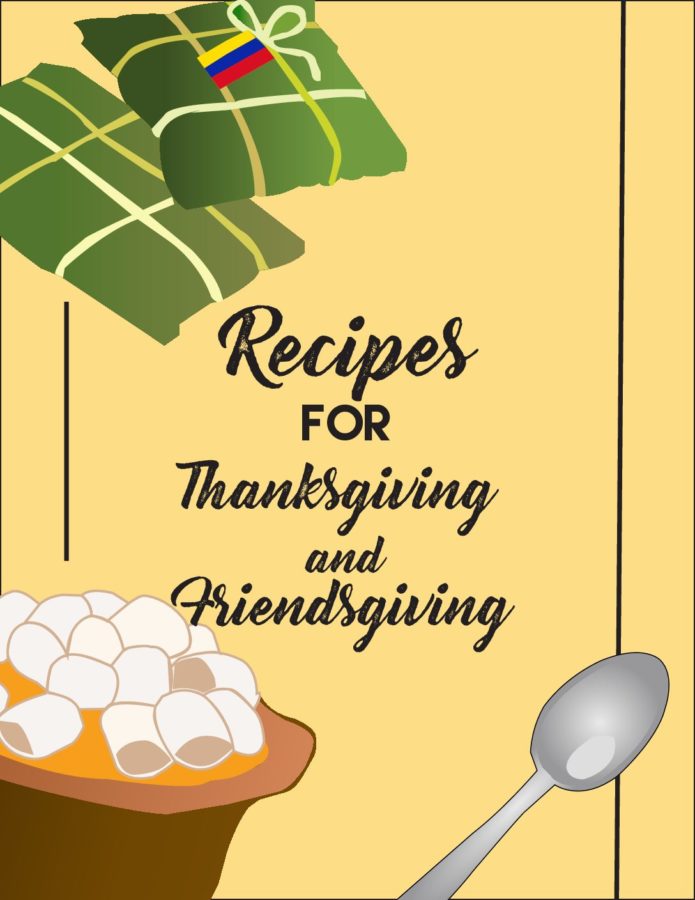 Amidst this holiday season, there is nothing better than spending time with loved ones, watching holiday movies, drinking hot cocoa and enjoying the weather. As special as other  parts of the season are, the holidays would not be the same without warm, sweet, and savory foods.

Junior Sofia Palacios owns an online bakery, Scrumptious, on Instagram. She takes orders year-round, but they stack up during the holiday season when she releases her fan-favorite holiday menu.

“Food is a big part of the winter holidays. Certain dishes signify the season and what we celebrate,” Palacios said. “Whether it’s during the meal or in the process of cooking it, food brings people together during the holidays.”

Here are two recipes sure to get family and friends in the holiday mood.

For a traditional, American dish:

The marshmallow sweet potato casserole was created by Janet McKenzie Hill in 1917, as a way to sell more marshmallows to Americans. Today, every plate at Thanksgiving dinner has a slice of the casserole. But the low difficulty level of the dish also makes it a perfect recipe for Christmas and other holiday dinners. To switch things up for the next holiday, this recipe replaces the marshmallow topping with nuts.

Peel sweet potatoes, then boil. Cook until tender.
Once ready, mash up the sweet potatoes, letting them cool when done.
Once the mashed sweet potatoes have  cooled down, begin to mix in eggs, sugar, and milk. Remember tomix everything gradually —  you don’t want to go overboard.
Mix in spices (to personal preference).
Take softened butter, and cover the baking dish.
Place previous mix into the dish.
In a separate bowl, combine sugar, butter, oats, pecans, and flour. The mixture should be crumbly.
Sprinkle this mixture on top of the one already in the baking dish.
Bake at 385 degrees for 25 minutes.
Take out of oven when done and serve for guests.

The Hallaca characterizes the holiday season in Venezuela. . An event on its own, making and assembling hallacas truly takes a village, with most families traditionally making them together. Full of flavor and history, the hallaca has a special place in every Venezuelan’s heart and memories.

While similar in some aspects to the Mexican tamale —  both are made with cornflour and wrapped  with vegetable leaves — an hallaca is not the same thing as a tamal, and the cultural background of each proves that.

The history of the Hallaca goes back to Venezuela’s  colonial era. Some say that the name itself tells the story, probably because  the word “hallaca” sounds similar to “allá” (or “there”), referring to the European ingredients of the meal, and “acá” (“here”), refers  to indigenous American ingredients such as corn and banana leaves, according to Culturizando.

The ingredients show this exchange of cultures, with the olives and raisins coming from the Romans and Greeks, the almonds and capers from the Arabs, the beef from Castilla and the corn and banana leaves from the Indigenous Americans, according to Confirmado.

Hallacas were said to originate from the leftovers of the feasts that the Spanish conquistadores enjoyed for Christmas. Indigenous and African slaves took the leftovers and created the hallaca. However, historians proved that by the 18th century, the hallaca was  a crucial part of Venezuelan gastronomic culture, with even upper classes enjoying the plate on a regular basis, as explained by Medium.

In the present day, making hallacas in December and around the holidays represents one of the most important ways in which Venezuelans preserve their culture and pass it on to future generations, as kids grow up used to making the hallacas with their families every December.

For a more environmentally-conscious twist, hallacas can easily be made vegan by substituting meat and chicken for mushrooms and seitan (a vegan high-protein meat substitute made out of wheat gluten), as the recipe below illustrates.

While time and effort-consuming, the intense process of making hallacas pays off with a culinary experience that tastes like no other and lasts for a very long time, since hallacas can be frozen and consumed up to five months later.

Enjoy a piece of centuries-long evolution of the recipe with a modern, yet traditional, vegan version of the beloved hallaca.

Mix all the dry ingredients and all the wet ingredients separately. Once you have both mixtures, add wet mixture to dry mixture and fold them as you go.
Keep folding the mixture until you have firm dough.
Sprinkle vital wheat gluten over your work surface and knead the dough until it feels moldable and elastic.
Shape the dough into small balls about one inch in diameter and flatten them out to make a semi-oval shape.
Boil vegetable broth in a large stockpot and bring to a simmer. Submerge the pieces of seitan into the broth, cover the pot with a lid and cook for about 45 minutes.
Preheat the oven to 350 degrees Fahrenheit and spread the olive oil onto a sheet pan.
Take the seitan pieces out of the broth and place them on the sheet pan. Broil for about 30 minutes, flipping them halfway through.
Take out of oven and let sit for 10 minutes
Crumble the seitan into smaller pieces.

Start by making the “sofrito.” Heat a pan to medium heat and add oil, leeks, onions, green onions and garlic. Stir occasionally for five minutes or until onion is translucent.
Add the broth, sugar, paprika, salt, adobo and black pepper and simmer over high heat.
Add extra sliced mushrooms and crumbled seitan into stew and mix. Simmer for about 20-30 minutes until all or most liquids evaporate and the mixture is thick.

Mix the oil and annatto seeds until the oil turns bright orange. Discard the seeds and set one  cup of oil aside.
Mix the dry ingredients.
Add oil to the dry mixture and start slowly adding the broth, constantly kneading the dough until it is soft and flexible. You might not need all 3 cups of broth for your mixture.
Let sit.

If frozen, let the leaves thaw as instructed in the packaging.
Cut the leaves into 16 12-inch square pieces. Set uneven (long, short or broken) pieces aside; they’ll be used to secure the Hallaca.
Using a damp, clean kitchen towel, clean both sides of the leaves and pile them aside.
Take one of the leaves and dampen it with the vegetable oil mixture on the rough side of the leaf.
Place a ball of masa dough in the leaf and flatten it until you have a ⅙-inch thick circle.
Put a tablespoon of stew in the middle of the circle.
Garnish with peppers, onions, raisins, almonds and olives.
Fold the leaf to fully enclose the filling, creating rectangular pockets. Use anywhere from one to three  extra leaves to secure it as needed, making sure that there are no holes in the pocket and that the hallaca is completely encased by banana leaves.
Tie each pocket with kitchen twine in this pattern:

Place the hallaca vertically and put a string of twine under the hallaca, leaning toward the right side of it.
Hold both ends of the string and flip the hallaca, creating a line on the right side.
Create an upside-down “L” shape by using the same method as before to tie it horizontally towards the upper part of the hallaca.
Repeat the process with the same string until you have a square of string tying the leaves and the hallaca.
Tie it at the end to secure it.

Boil the hallacas in water for about 40 to 45 minutes.
Take them out with kitchen clamps and place them vertically so that all the water that could have gotten in the pocket drains out.
Eat or freeze for up to five months.
To reheat frozen hallacas, place them in boiling water for about 15-20 minutes.