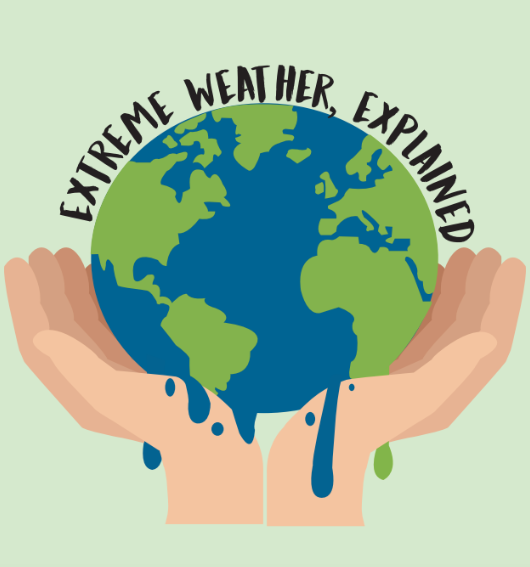 The United Nations recently announced that the past decade has been the hottest ever recorded, warning that the higher temperatures are expected to contribute to more extreme weather events in 2020.

Internationally, events such as the Australian bushfires, which have intensified due to severe drought, exemplify this behavior. The fires, which have burned 15.6 million acres of forestry and have killed an estimated 1 billion animals, have been exacerbated by hot, dry weather along with ongoing drought and strong winds aggravated by climate change.

The National Climate Assessment found that over the past 50 years, the U.S. has experienced increases in extreme weather events with prolonged periods of excessively high temperatures, heavy downpours and in various regions, intense flooding and drought.

Extreme weather is the primary way most people experience climate change and consists of unusual weather events occurring at an unprecedented level in a geographic area, according to the National Climate Assessment.

What extreme weather events are expected to impact South Florida?

According to a study published in the journal Advances in Atmospheric Sciences last Monday, last year was the warmest year recorded for the world’s oceans. The oceans serve as a sponge for heat, absorbing about 93% of the excess heat caused by greenhouse gases, according to a 2014 report by the Intergovernmental Panel on Climate Change (IPCC).

This oceanic warming translates into increased fuel for hurricanes. While this will not necessarily mean that there will be more frequent hurricanes, hurricanes are expected to increase in intensity.

“The wind speed of hurricanes is dependent upon the temperature of the ocean water. Small changes in the ocean temperature can have magnify a hurricane’s strength,” Associate Program Manager at the Cleo Institute Julieta Rodrigo said. “A one degree Fahrenheit rise in ocean temperature can increase a hurricane’s wind speed by 15 to 20 miles per hour — enough, for example, to shift a Category 1 storm (minor damage) to a Category 2 storm (extensive damage to homes and trees).”

Coastal storm surge also becomes more worrisome as the sea level rises. A predicted minimum of a two feet rise of sea-level is expected for South Florida by 2050, according to a paper published by the Department of Geological Sciences at the University of Miami. This will  contribute to the amplification of a storm surge’s impact as illustrated by Hurricane Sandy, whose increased storm surge caused an estimated $65 billion in damages in New York, New Jersey and Connecticut in 2012.

South Florida is especially vulnerable to coastal flooding and the conditions that climate change is bringing is affecting these flooding events.

“The latest climate science indicates that while climate change may not induce floods directly, it can exacerbate the factors that cause them. For instance, a warmer atmosphere holds and releases more moisture, thus contributing to heavier downpour and increasing the possibility of floods,” Rodrigo said.

Increasing temperatures is another concern regarding extreme weather and South Florida. By 2050 in Miami-Dade, we can expect to live almost half the year in what is considered “danger days,” or days where the heat index makes the outdoors intolerable, according to a study  published by the Union of Concerned Scientists.

“Miami is meant for people who love the outdoors and the fact that this extreme heat will keep us in our homes, further disconnecting us from nature, disgusts me and it terrifies me,” Palmetto senior and climate activist Nicole Gazo said.

What does this mean for South Floridian communities?

The effects of more intense hurricanes are expected to disproportionately impact lower-income communities.

According to Bankrate’s financial security index survey, only 39% of Americans surveyed said they would be able to cover a $1,000 emergency using savings; thus, in instances such as evacuation or recovery, families wouldn’t be able to spare the costs.

“…These natural disasters will disproportionately impact vulnerable communities, like the elderly, minority communities and those of low-wealth. These populations often lack flood insurance, access to transportation during an evacuation, financial means to recover from damages to their homes or the ability to relocate,” Rodrigo said.

According to a 2012 study in the American Journal of Orthopsychiatry after Hurricane Katrina, nearly half of survivors suffered from some form of mental health distress.

“…The loss of electricity and the debris from fallen trees and damaged homes pose dangers to public safety. The risk for mental health issues is also exacerbated, as individuals grapple with stress, anxiety and post-traumatic stress disorder, among others,” Rodrigo said.

What does this mean for South Florida’s ecosystems?

These events will also cause severe damage to our ecosystems. Wetlands serve a multitude of purposes, including filtration of drinking water, buffering storm surges, housing at least one-third of all threatened and endangered species, supporting tourism and serving as a carbon sink.

The uprooting of the trees will not only impact the mangroves, but also all those reliant on them.

“The destruction of mangroves is particularly worrisome for biological diversity, as mangroves are habitats for many engendered species in South Florida, including crocodiles, deer and sea turtles,” Rodrigo said.

In addition, extreme heat worsens vector-borne diseases. These are diseases carried by small organisms like mosquitoes and ticks.

“Any time you have standing water like that you know you get mosquitoes breeding. So you could potentially see an increase in tropical disease,” Shlachtman said.

Miami-Dade also does not require A/C units in affordable public housing, according to an article by the Miami Herald. Thus, those who are reliant on this housing system will be especially affected by rising temperatures.

What actions need to be taken to help with these issues?

There are two approaches when discussing addressing the impacts of natural disasters: adaptation and mitigation, both of which play important roles to address this issue. Adaptation is a response to the effects of climate change whereas mitigation addresses the cause.

“In regards to adaptation, we can support the building and expansion of adaptive measures that protect our communities from natural disasters,” Rodrigo said. “These measures can include raising roads and erecting sea walls to prevent flooding in low-lying coastal areas, as well as adapting building codes to make homes and infrastructure more resilient against intense hurricanes.”

Miami Beach, for example, invested $400 million into mitigating flooding through the installation of pumps and backflow valves and elevation of roads.

“To implement mitigation strategies, we have to explain the causes of climate change, and identify our individual and collective capacity to mitigate it. The main contributor of anthropogenic climate change and increased global temperatures is the burning of fossil fuels (oil, coal, and gas),” Rodrigo said. “…The most effective way to mitigate these natural disasters is to reduce our collective carbon footprint, particularly by reducing our collective consumption of oil, coal and gas.”

What can Floridians do to help ensure that adequate measures are implemented to help the crisis?

Voting: Voting for a political candidate who realizes this is an issue and is willing to take measures to address it.
Advocate for climate action: If you are unable to vote, get involved with local environmental organizations that seek climate action, such as Fridays For Future, Extinction Rebellion, Florida Climate Strike, 350 South Florida, The Sunrise Movement and the CLEO Institute.
Join the Climate Leadership Information Project program at Palmetto: CLIP advocates for climate action, contacts elected officials, educates our peers and families about the climate crisis and seeks to create meaningful change at Palmetto.
Reducing your food waste: If food waste was a country, it would be the world’s 3rd largest carbon polluter, according to the United Nation Food and Agriculture Organization (FAO). This is because of the lack of oxygen in landfills during the decomposition process, as a result, methane is released. Instead, you can compost most of your food waste, producing fertile soil.
Incorporate more plant-based meals in your diet: The meat and dairy industries are huge contributors to greenhouse gas emissions and worsen climate change.
Buy local, seasonal and organic food: Because they do not use certain agricultural techniques and require less transportation, local, seasonal and organic food have a much lower carbon footprint.