EDITORIAL: American Greatness is Back 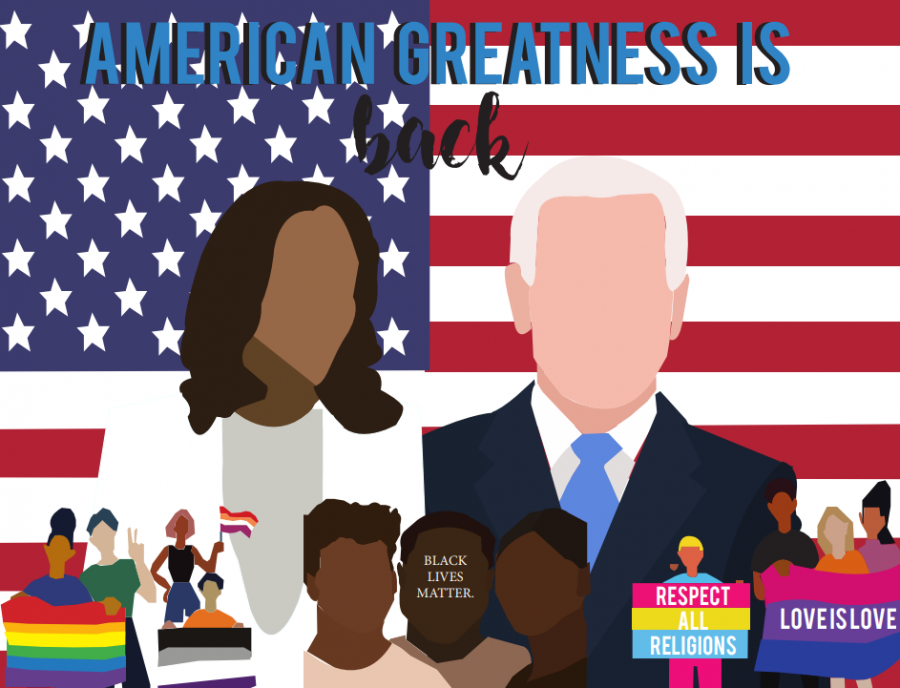 When I was a little girl, a month shy of my fifth birthday, President Barack H. Obama became the 45th president of the United States of America. Today, a few months before my 17th birthday, Kamala D. Harris has been named the Vice President-elect of the United States of America, alongside President-elect Joseph R. Biden. That little girl who grew up knowing a Black man as president feels so much pride knowing also that a woman of color can hold the position of vice president.

To start, it remains imperative to say that I have the utmost respect for those with opposing political views, including those belonging to the Republican Party. However, the Republican party of President Donald J. Trump does not truly represent American conservatism and its founding principles and values.

Across this great nation stand people from various backgrounds, socioeconomic statuses, races, ethnicities, genders, cultures, religions and sexualities. Many of these people — hardworking and patriotic Americans — have faced cruelty at the hands of this president.

The fight for equality for people of color has lasted for centuries in this country; during the Reconstruction Era from 1865-1870 under Presidents Abraham Lincoln and Andrew Johnson, the 13th, 14th and 15th Amendments abolished slavery, granted citizenship and equal protections to those born, naturalized or formerly enslaved in the U.S. and ensured the right to vote to citizens of color. Later, during the 1960s, Presidents John F. Kennedy and Lyndon B. Johnson followed the direction of civil rights leaders across the country, including the late Senator John Lewis, Dr. Martin Luther King Jr. and Attorney General Robert F. Kennedy. Supported by civil rights leaders across the country, Johnson signed the Civil Rights Act of 1964 into law, which ended segregation of public places and banned employement discrimination on the basis of color, religion, gender or origin.

In recent months, more than 56 years after the Civil Rights Act of 1964, the Black Lives Matter movement has swept the nation, with many united behind it.  Following a precedent set by previous presidents, a tradition of unifying the country and fighting for the greater good, this movement gave Trump the opportunity to step up in support of civil rights and push to ensure that all citizens, regardless of color or origin, receive the respect they deserve. Trump did the exact opposite — he called Black Lives Matter a “symbol of hate.”

In no way, shape or form do I believe that all politicians have proven themselves perfect. Quite the opposite, actually, because as humans, we have all made human mistakes. No president, past, present or future, has ever or can ever be perfect. However, there remains a distinct difference between human mistakes and blatant character flaws.

This president has shown that his bigotry is not something he feels ashamed of or wishes to hide. In addition to calling Black Lives Matter a “symbol of hate,” he has repeatedly made racist statements, insulted women, mocked and ridiculed the disabled, given statements demonizing those of the Islamic faith and has made Asian people a target by repeatedly calling COVID-19 the “China virus.” The aforementioned statements act as just a few examples of the hate shown by this president.

From the time of our nation’s inception, service has acted as a pillar of American tradition, hence why we honor the millions who have dedicated their lives to the armed forces. The late Republican Senator John McCain, a prisoner of war and war hero, dedicated his life to public service. As a man of upstanding moral character and a true patriot, McCain and his family serve as a prime example of the many military families across the country. Trump’s remarks saying that “he preferred people who haven’t been captured” and calling those who have died in war “losers” and “suckers” stands as nothing short of abhorrent. There has never been, in the history of this nation, a more unpatriotic and disdainful commander-in-chief.

While many other issues regarding this president remain, I would like to make one thing clear — I have only wanted the best for this president. I wanted to stand behind him, not as a Democrat or Republican, but as an American, because a true patriot places country over party. This president, however, has tarnished the reputation of the United States of America and American greatness.

Foreign policy and relations, COVID-19, climate change, healthcare, equality, infrastructure, taxes and a whole host of other issues present themselves as massive undertakings for the incoming administration. We as a collective approach a pivotal point in American history. The people of these United States of America have chosen an administration that will provide exemplary leadership, policies and work to restore the heart and soul of this nation.

Division has run deep in this country throughout the last four years. Contrasting differences in ideology and the path that we feel this country should continue on remain stark. This shows us why we need an administration that brings this nation together, not one that tears it further apart. We are first and foremost, forever and always, Americans, and that principle should always take precedent.

As a nation, this country needs leadership that reintroduces the healthy principle of open dialogue, room for debate and eagerness to listen to the opinions of others. This administration pledges to do just that, in addition to working across the aisle to get legislation done that benefits the American people as a whole. These ideals, working in a bipartisan fashion and commitment to listen to the diverse voices of the American people, has not only stood at the forefront of the Biden-Harris campaign, but remains an important paradigm set forth by our founding fathers and previous presidencies.

American greatness has proven itself throughout history, as we have worked together, both domestically and internationally, to better the lives of humanity. In working with our domestic and foreign allies, we will restore American greatness and continue to build upon the great legacy that this nation has. I have the utmost faith that the United States can reclaim and truly stand proud in its role as a global superpower and that we can show what American greatness truly means. My fellow Americans, the time has presented itself for the Democrat, Republican and Independent parties to come together and work towards creating a more perfect union.

To the voters who feel sidelined, unheard, unseen or disappointed in the results of this election, remember that we are so much more than our political parties. We join together because of our  promise to love and work in the best interest of our country, not our parties. I hope that you join the millions of other Americans in giving this administration a chance and continue to make your voices heard. American greatness has returned and I cannot wait to see all that we can accomplish together as a united nation.